It’s all about El Zonte. A beach town that took part in an economic experiment, became Bitcoin Beach and changed its country. Also, if everything goes right,  it will change the world. For the best. As Bitcoinist reported, “People all over the world are searching for information on real state and citizenship in El Salvador.“ However, life on Bitcoin Beach remains a mystery. Is it as advertised or does its Bitcoin economy have a dark side?

Vice’s audiovisual piece is a journalistic report with a clear editorial agenda behind it. However, the reporter ends up believing something special is happening. In any case, by watching it we can take a peek behind the veil. We can imagine what the town is like and how the sudden attention is changing each and every life. And the process is just beginning. The party hasn’t even started. El Salvador’s Bitcoin Law goes into effect in September.

Look, Vice is Vice. The journalist, Keegan Hamilton, didn’t do his homework about Bitcoin. Because of that, he can’t dig deep or ask the right questions. The result is a surface report that doesn’t hold much weight. In fact, they probably shoot and produced this before El Salvador made Bitcoin legal tender.

At first, the focus was the ATM. This is revealed by the original title of the piece: “This Town Has One ATM, and It Only Gives Out Bitcoin.” The text in the description box also gives it away:

Along the coast of El Salvador lies the small town of El Zonte, known mostly for ecotourism and surfing. Even decades after being discovered by tourists and surfers the small town of 3,000 locals never had the infrastructure for an ATM. But, this past year El Zonte finally caught a wave of its own and now (oddly enough) is home to a Bitcoin ATM.

In any case, Hamilton contacts Roman Martínez, one of the key people in the Bitcoin Beach experiment, and doesn’t ask him any questions. Martínez teaches him how to pay with the Lightning Network apps, and Hamilton doesn’t inquire about the technology. What a wasted opportunity.

Hamilton misses the boat on what makes the experiment something never before seen. He thinks Strike is “an app like Venmo”, then installs it and says, “sending Bitcoin is less user friendly than Dollars.” The fact that Strike uses the Lightning Network as the underlying mechanism just flies over his head.

After that, of course, he says, “So, when folks in El Zonte pull up their phones to make digital payments, they aren’t necessarily using Bitcoin.” That’s right, he used “necessarily” as a shield instead of doing the research. The Lightning Network is part of Bitcoin, period. 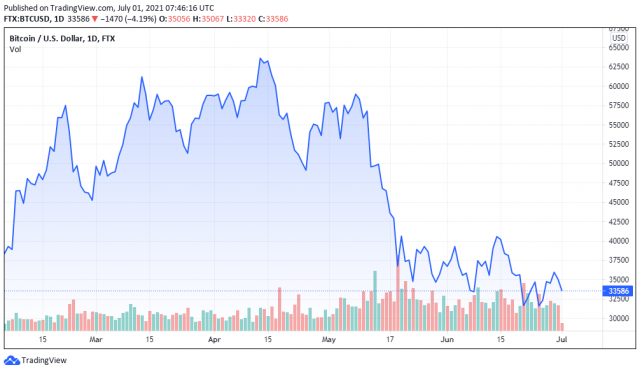 And what’s with Hamilton saying to everyone that Bitcoin “can go to zero.” Where does that come from? If you look at the 12-years graph, that arrow only goes up. Still, it’s good to know that people are aware of the risk. Because there are risks. It’s also good to know that not everyone is as comfortable with the system, which is hard to learn and get used to. Hamilton tries to pay for a raspado in Bitcoin and doesn’t because the lady doesn’t have the same app as him. In reality, any wallet can pay any wallet.

Credit where credit’s due, Hamilton brings out Michael Peterson. The surfer that was entrusted with the program that would distribute the mysterious doner’s Bitcoin into El Zonte. He lets him tell the whole history, and that’s commendable. Then, he tries to impart some white guilt into him but backs down when Paterson says that they’re focused on empowering the local talent. “They’re the ones who are driving this forward. They’re the ones that are taking this to the next level, into something that’s transformed the entire country and I think will transform the world.”

Then, he interviews Jorge Valenzuela, another Bitcoin Beach community leader. “Bitcoin stayed in the community.” Hamilton asks him about possible scams, and Valenzuela says that there are scams everywhere. “Bitcoin is changing the communities exponentially,” he finishes.

For its part, Hamilton finishes the report with a heart-warming story about a construction worker that used to spend three hours of every month paying his electric bill. Nowadays, he can do it almost instantly using Bitcoin.