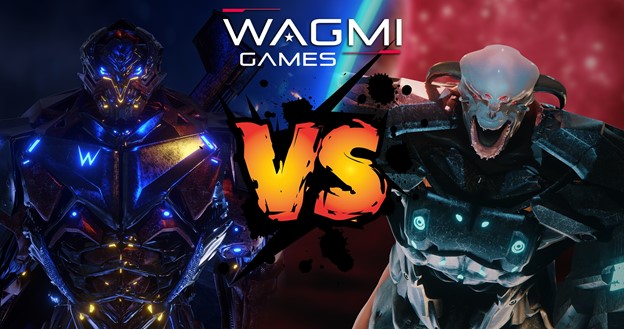 The crypto industry is based on the power of the people, its capacity to form communities and come together towards a goal. The GameFi sector and the play-to-earn (P2E) models have given these users the tools to combine these factors and turn them into real-world assets while gaining the potential to transform a billion-dollar industry.

A unique project has been created to embrace those principles based on the P2E model, called WAGMI Games (an acronym for the popular phrase amongst crypto communities, “We’re All Gonna Make It”). Created as a futuristic battle game between humans and aliens, players will deep dive into an adventure that will decide the fate of planet earth.

The first phase for WAGMI Defense will be developed in partnership with Cubix, and will be comprised of a browser-based mobile Player-versus-Player (PvP) tower defense game. Set to be released in March 2022 as part of a bigger rollout roadmap on both the Ethereum and Binance Smart Chain, it’ll be available on iOS, Android, and desktop computers.

The game development company Cubix was selected by WAGMI Games after a wide search for the perfect partner. The company has a team of over 200 members with experts in blockchain solutions, Non-Fungible Token (NFTs) based games, and an impressive track record.

Cubix has developed projects in partnership with gaming giant Nintendo, one of the oldest and most respected video game companies in the world. Also, the game developer has worked with Sapient, Walmart, and others.

WAGMI Games Will Take On-Chain Entertainment To A New Stage

The first phase of WAGMI Defense (already in development) will be inspired by the globally popular Clash Royale, only with more realistic models and 3D designs. On the platform, players will engage in battles with collectible NFT cards which have different powers and characters.

These items will be acquired on the WAGMI Network and will help players plan and improve their strategies. The game will reward players with WAGMI tokens which can be redeemed for other cryptocurrencies.

Another key feature for WAGMI will be its native NFT marketplace which will enable players to buy, sell, and trade their collectibles. This will be the favorite spot for players looking to strengthen their game by adding new accessories, characters, and different items.

Per the project’s Whitepaper, players will be able to trade over 350 NFTs in its first iteration. This includes power-ups, wardrobes, cards, and more to enhance their experience on the WAGMI universe and their chances to save the earth.

The NFT Genesis Art Collection for the Tower Defense game will mint in January of this year. Shortly after the NFT drop, expect the release of the first cinematic trailer for the WAGMI Game.

By the end of 2022, WAGMI Games plans to launch a flagship 3D MMORPG. In addition to the games, WAGMI is also currently developing a series of fictional stories and plans to release NFT comics based on the WAGMI universe.

WAGMI aims to become a hub for blockchain-based games and develop more partnerships, such as the one with Cubix, which are poised to disrupt the entire video game industry.