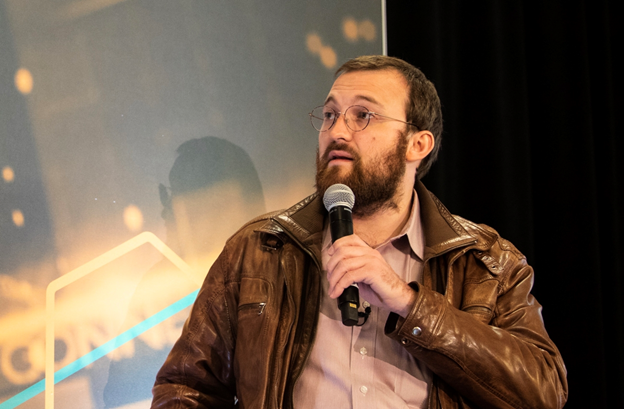 Charles Hoskinson, the founder of Cardano blockchain, is perhaps one of the most controversial individuals in the crypto ecosystem. In his own words, Hoskinson has previously said ‘I’m kind of polarizing. People either like me or they hate me. There’s not a lot of people in between.’

The 34-year old serial entrepreneur took an interest in cryptocurrencies during the early days of Bitcoin; at the time, he had joined Ron Paul’s presidential campaign, whose philosophies were based on Austrian economics and theories of money. Ron Paul argued that a fiat-based monetary ecosystem is unreliable in the long term.

Hoskinson later supported this philosophy following Bitcoin’s debut, the Hawaii-born polymath and crypto enthusiast echoed that ‘When Bitcoin came out, it was like the spiritual successor to what Ron Paul was talking about.’

However, it was not until 2013 that Hoskinson quit his day job to fully immerse in the crypto industry. He was eventually introduced to Ethereum’s whitepaper by Anthony Di Iorio, after which he met with Vitalik Buterin and three other individuals to discuss the future of launching the first smart contract platform (Ethereum).

While most of the Ethereum community has since fallen out with Hoskinson’s beliefs, he played a fundamental role in designing the Initial Coin Offering (ICO). Hoskinson was a key player during Ethereum’s take-off stages, making the strategic decision of registering the foundation in Switzerland when he briefly served as the CEO.

However, his woes began shortly; Hoskinson suggested that the foundation be run as a profit organization, a strategy that did not resonate with Ethereum’s community. The Cardano founder was ultimately forced to take an unceremonious exit.

Despite taking a step back, Hoskison still stuck around the crypto ecosystem development. He was soon approached by Jeremy Wood, a former Ethereum colleague, who introduced him to the Input Output Hong Kong (IOHK) project. The project’s goal was to design a scalable and secure blockchain ecosystem for government agencies, academic institutions and corporations.

The Debut of Cardano

Cardano, which Hoskinson refers to as a third-generation blockchain network, is the result of a proposal by IOHK clients who wanted a Japanese version of Ethereum. At first, Cardano’s focus was on the Japanese market, with the primary goal being to build an innovation that combines the aspects of commerce, computation and compliance. The project raised $62 million from its 2017 ICO, 95% of which came from Japanese investors.

Since the project’s debut in 2015, Cardano expanded its stakeholder base under the IOHK umbrella, featuring developers across the globe. Though referred to as a ‘tortoise’ blockchain, the platform has grown significantly since it was pioneered to the public in 2017. Cardano’s second phase was marked by the Shelley upgrade in 2020, which enhanced the network’s decentralization and enabled users to stake Cardano’s native token, ADA.

That said, the most distinguishing feature of this blockchain platform is its Proof-of-Stake (PoS) consensus, a more energy-efficient approach compared to Bitcoin and Ethereum Proof-of-Work (PoW) algorithms. Unlike PoW which relies on computing power, Cardano’s PoS consensus leverages a staking-based model that is complemented by the Ouroboros algorithm. Simply put, this is the infrastructure that secures Cardano’s network, facilitates transaction validation and the minting of new ADA tokens.

“If we get [proof-of-stake] right, the network will be 250 times more decentralized than Bitcoin.” – Charles Hoskinson.

Borrowing heavily from Hoskinson’s research background, Cardano has been in the works since 2015. During this period, many speculated that it would not live to see the launch of its smart contracts. Well, this narrative has since been disputed, given that Cardano introduced smart contract capabilities following the launch of the Alonzo mainnet in 2021.

Interestingly, Cardano’s network has also attracted more contributors, averaging 701 Github code repository commits monthly compared to Ethereum’s 447 CPM. According to a YouTube video by Hoskinson, the community is bigger than what most crypto natives imagine.

“That’s why VCs don’t even actually understand that Cardano has a community. They think it’s just me behind a microphone.” said Hoskinson.

A similar growth curve can also be seen in the ADA token prices, currently in the sixth position with a market capitalization of $39 billion. The token’s price has surged by over 227% within the past year and was one of the ‘green’ assets that maintained its value following Elon Musk’s criticism of Bitcoin’s PoW consensus. As of press time, one ADA token retails at $1.23, a 6311.6% increase from its all-time lows according to Coingecko.

What is Happening in the Cardano DApp Ecosystem?

With Ethereum still in the process of developing its PoS infrastructure, Cardano is gradually challenging the platform’s long-standing dominance in DApp development. The Cardano smart contract ecosystem is now attracting fundamental projects with a tangible value in traditional finance and Decentralized Finance (DeFi).

This upcoming DApp blockchain hosts notable projects such as Revuto, an active subscription management application. Revuto enables users to actively manage their subscriptions, featuring a one-stop platform where a subscriber can snooze or block payments. Some of the subscription services that users can manage include Spotify, YouTube premium and Apple TV+.

Furthermore, Revuto exposes its users to the growing DeFi market through a native token dubbed Revu that can be stored in a Cardano lite wallet. This project is also the first Cardano-based DApp to launch an ICO, recording over 3 million registrations to date. Meanwhile, the REVU token was recently listed on KuCoin and Gate.io. Revuto also plans to scale its services to feature a micro-lending and borrowing pool that will allow users to leverage DeFi liquidity to pay for subscription services.

Besides Revuto, Cardano is home to the Adaswap decentralized exchange (DEX). This DEX introduces swapping capabilities for Cardano-native assets based on an Automated Market Maker (AMM) model. In addition, the platform features a native token ASW that eliminates transaction and participation fees hence creating a wealth retention model for the DEX users.

The ASW token has already been launched through an Initial Dex Offering (IDO) that took place on the Cardstarter launchpad. ASW not only serves as a reward or governance token but also facilitates efficient swaps and real-time price arbitrages as per the Free Finance tokenomics model. So far, Adaswap has partnered with notable crypto projects, including Djed stablecoin developer, COTI. They are also looking to launch an NFT ecosystem for trading digital collectibles on Cardano.

More Development is Yet to Come

While it may seem like Cardano is almost reaching the pinnacle, there is a lot more in store for this community. Most importantly, Cardano’s upcoming Hydra upgrade will introduce a Layer-2 scaling solution, increasing its efficiency to 1 million transactions per second (tps). This is way higher than comparative Layer-1 platforms like Solana which touts 65,000 tps. Hoskinson recently noted that Hydra’s development is still ongoing, emphasizing the positive impact once it is launched,

“We are going to keep adding resources to Hydra, and we’ve been trying to identify some teams so we can parallelize the workstream because it’s such a high commercial priority. And it’s going to be very important that we’ll be able to offload a large number of the transaction traffic that’s going to come from all of the apps that are coming.”

Having come a long way, Cardano is slowly living up to the promises. Hoskinson might not be the cup of tea for some crypto enthusiasts, but it is inevitable to credit the 5-year long evolution that Cardano has undergone. Going by the rate at which innovators are opting for scalable and cost-effective ecosystems, the Cardano blockchain network is one to watch in the coming years.