Why Polkadot is the Future of DeFi

In the last year, decentralized finance (DeFi) has gone from being a relatively unexplored crypto niche to a bustling industry filled with a diverse array of protocols and tools that offer new services and opportunities to users.

As it stands, the vast majority of DeFi applications are built on the Ethereum blockchain, due to its popularity among decentralized application (dApp) developers and significant pre-existing user-base. However, this sudden growth of DeFi on Ethereum has pushed the blockchain to its limits, leading to transaction delays and inordinately high fees — making many Ethereum DeFi platforms simply unusable to regular users.

Because of this, a large number of developers are now opting to build their DeFi applications on Polkadot, and are looking to take advantage of its unique properties to offer experiences that haven’t yet been possible on other blockchains.

As an interoperable blockchain platform capable of bridging together the diverse array of blockchains currently operating, Polkadot has proven itself to be a promising solution to a range of challenges faced by developers and users today.

Here’s a look at why it’s got DeFi developers’ hopes soaring in 2021.

Despite launching its mainnet in just mid-2020, Polkadot has seen incredible uptake among investors and developers. 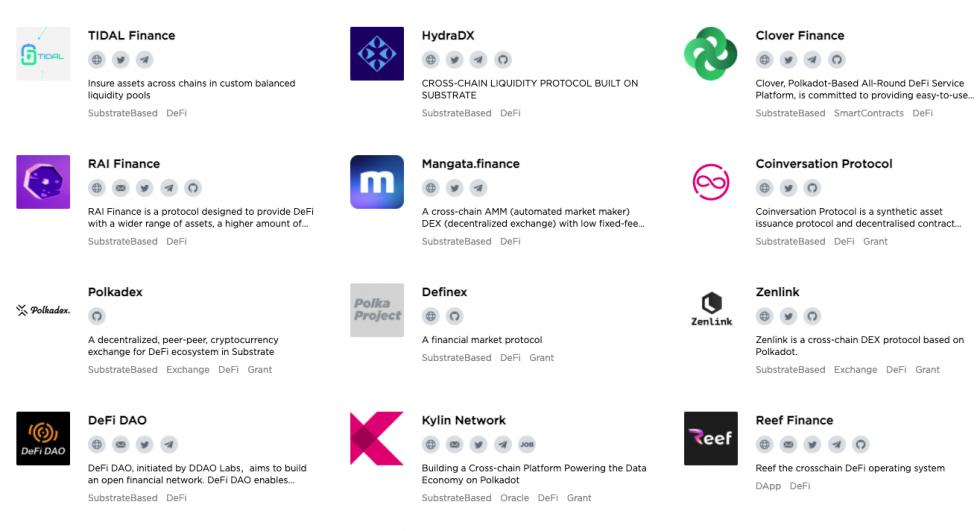 The potential and capabilities of the Polkadot blockchain have already been recognized by almost 350 projects which are already building on the platform — including dozens of DeFi solutions.

Polkadot is now home to several of the most promising DeFi platforms, including:

Clover is an upcoming Polkadot parachain and all-in-one open DeFi platform that allows developers to easily deploy their dApps on Polkadot and leverage its unique properties to create DeFi solutions that were previously only available on Ethereum.

Backed by leading exchange platform Bithumb Global, Clover Finance is set to provide an open, modular framework developers can easily use for building their applications on Polkadot, drastically lowering the barrier to entry to building on the platform.

The testnet will be open for only developers and professional Validators. To join the internal testing, you can contact our admins: https://t.co/lTYI1aS3TT. For more details: https://t.co/kiDz91Ru7W.@polkadotnews @polkawarriors @polkaprojectcom pic.twitter.com/iJlqYTaMHB

It can be used to incorporate powerful blockchain and DeFi elements — such as NFTs, CDPs, and yield-farming — into gaming applications, and features a unique reward token known as Crowns which is used to reward those who interact with the Seascape ecosystem.

While Acala is well-known within the Polkadot ecosystem for offering its first native stablecoin (aUSD), the team behind the project are insistent on not being pigeonholed. Acala is on a mission to become a hub for defi through its stablecoin platform, ultimately supporting the foundation for liquidity on multiple blockchains, whether that is within or outside of Polkadot.

While Acala is still in its early development stage, it will provide more functionality than most stablecoins once the project is officially on the mainnet. The platform will offer tools for borrowing, lending, earning interest, and of course governance voting power.

In the meantime, Acala’s ‘bizarro’ counterpart Karura, is inching towards a launch on the Kusama canary network. Experts are hopeful that Acala will officially go live on the Polkadot mainnet in 2021.

Why It’s So Popular

Polkadot is built on a novel blockchain framework known as Substrate, which is widely regarded as being simple to build on, thanks to the dozens of composable modules that blockchain architects can use for building their solutions.

It uses a combination of the relay chain (Polkadot’s main chain), parachains, and bridges to connect the blockchain ecosystem into a cohesive, interoperable unit.

Developed by Parity Labs, Substrate is completely open-source, allowing developers to build on, ensuring builders can create their decentralized applications for the Polkadot blockchain with even limited budgets.

Substrate imbues Polkadot with a range of features that make it the ideal platform for building DeFi solutions on, including:

Speed: Polkadot has a block time of just six seconds and most transactions are considered final after less than a minute. This makes it ideal for building applications where speed is critical — like decentralized exchange (DEX) platforms.

Scalability: Polkadot can currently handle more than 1,000 transactions per second (tps), compared to just ~25 tps for Ethereum at its peak under ideal conditions. According to Polkadot’s founder Gavin Wood, this could eventually reach as high as 1 million tps, with the use of sharding and optimized parachains.

Interoperability: Arguably Polkadot’s biggest advantage is its interoperability. This means applications built on Polkadot and its parachains can easily interact with those on other blockchains (including Ethereum). Producing the first interoperable DeFi ecosystem.

Taken together, these features, and the breakneck pace of Polkadot’s development have positioned it as a potential launchpad for the future of not just DeFi — but potentially the crypto industry as a whole.