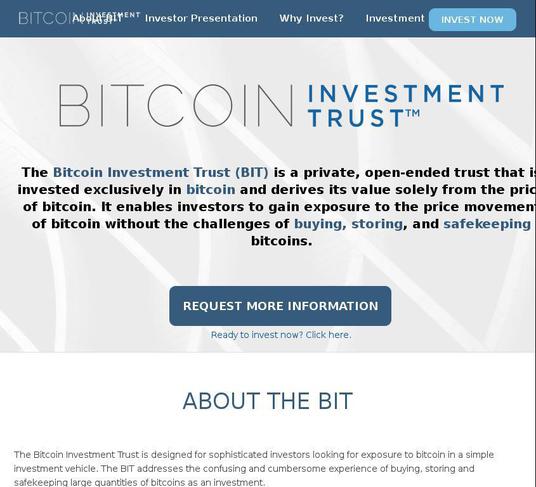 The Winklevoss Bitcoin Trust, currently moving towards regulatory approval, could be approved by the end of 2014 and will be a Bitcoin exchange-traded fund (ETF), with each share representing an amount of bitcoin held by the Trust. Currently, such an investment vehicle is only available to wealthy investors, through funds like the Bitcoin Investment Trust.  The Winklevoss ETF will allow people with a brokerage account to invest in Bitcoin without having to worry about the challenges of buying, storing, and safekeeping bitcoin.
Proposed in 2013, the Winklevoss Bitcoin Trust was the first Bitcoin ETF to be filed with the Securities and Exchange Commission (SEC), but the Bitcoin Investment Trust announced plans in early 2014 to release an over-the-counter Bitcoin ETF. The latter is taking a different regulatory approach that does not require approval from the SEC, and has projected a launch in the fourth quarter of 2014.

What is an ETF?

ETF stands for exchange-traded fund, and is an investment fund that tracks an index, specific asset or basket of assets.  Many aspects of the market are covered by ETFs.  First introduced in 1989, ETFs are similar to index funds, but unlike index funds, ETFs can be bought and sold throughout the day on the stock exchange.  They have low management fees, sometimes as low as 0.04%.

Background on the Winklevoss Twins

The Winklevoss twins, Cameron and Tyler, gained notoriety through their lawsuit against the Menlo Park, Calif.-based Facebook Inc. (Nasdaq:FB), from which they were awarded $20 million in cash and $45 million in Facebook stock in February 2008.  They rowed for the U.S. at the 2008 Beijing Olympics, went on to Oxford University’s business school in the U.K., graduating in 2010, and then became venture capitalists.  In April 2013, they claimed to own 1% of all Bitcoin in existence.  On July 1, 2013, their company Math-Based Asset Services filed with the SEC a Form S-1 Registration Statement proposing the creation of a Bitcoin ETF called the Winklevoss Bitcoin Trust.

Motivations for a Bitcoin ETF

Learn how you can start day trading with as little as $500. Start today!

The S-1 filing describes shares of the ETF to be “Easily Accessible and Cost Efficient.”  By offering a product that can be bought on an exchange, the Winklevoss Bitcoin Trust will allow investors to avoid the process of purchasing bitcoins on exchanges and having to handle storage.  The ETF price will also be based on a blended bitcoin price that reflects the volume-weighted average of top exchanges from across the world, whose current exchange rates can differ, and some of which may be difficult for investors to access.  Bitcoins can currently be bought on exchanges and through companies like Coinbase, but typically, set-up is required that requires the linking of a bank account and some level of identity verification.  Furthermore, secure storage of bitcoins by placing them into cold storage – that is, in wallets that are kept disconnected from the internet – can be technically challenging and investors may not want to take the responsibility of handling this.

A Bitcoin ETF traded on an exchange will give investors ways to implement various investment strategies such as shorting the ETF and buying it on margin.  Brokerages may also offer the ability to buy and sell options.  Furthermore, the release of a Bitcoin ETF will give Bitcoin exposure to the investing mainstream and add to its validity as a store of value and as a currency.

An amendment to the S-1 SEC filing was filed on February 19, 2013, and it included an announcement of the Winklevoss Index, or Winkdex.  The Winkdex is a price index for Bitcoin.  From winkdex.com: The index is “calculated by blending the trading prices in U.S. dollars for the top three (by volume) qualified Bitcoin Exchanges during the previous two-hour period using a volume-weighted exponential moving average.  This proprietary formula weighs transactions proportionally by volume as well as exponentially by time to give greater weight both to the higher volume transactions and more recent transactions.”  The top three exchanges by volume are selected from a set of five exchanges based on the volume exchanged over the previous 24-hour period.

Some might argue the ETF provides no value if one can buy and hold bitcoin on a service like Coinbase without having to incur the recurring fees associated with the ETF.  Coinbase is a San Fransisco, Calif.-based company, backed by renowned venture capitalists such as Andreessen Horowitz, that provides Bitcoin services to consumers and merchants.  For a one-time fee, consumers can purchase bitcoin on Coinbase.  However, a Bitcoin ETF will allow investors the ability to exercise different investment strategies regarding Bitcoin that are not currently available in the U.S.

The Winklevoss Bitcoin Trust, originally proposed to the SEC on July 1, 2013, is currently working its way toward regulatory approval.  When approved, its shares will be issued at a price arrived at through a volume-weighted average of the Bitcoin price on leading Bitcoin exchanges across the world.  Anyone with access to a brokerage account will be able to purchase shares or exercise other investment strategies made available by the brokerage.