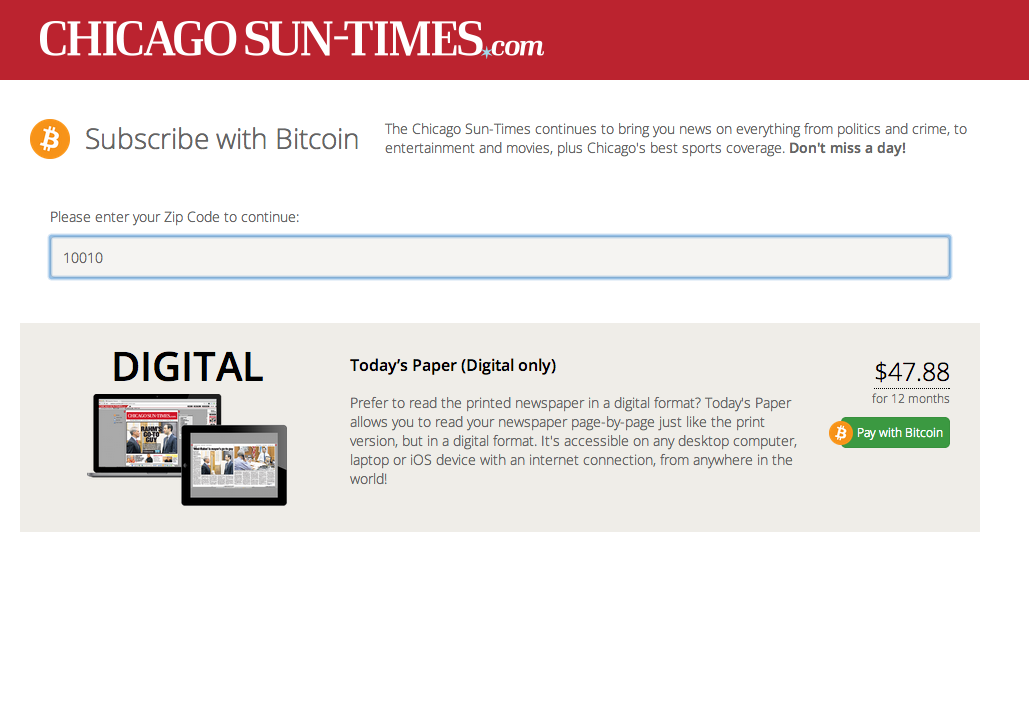 It is so nice to see how bitcoin is spreading all over the world. Thanks to Mr. Josh Metnick  CTO of Wrapports LCC a media ventrure that owns and operated  the Chicago Sun-Times. has started accepting bitcoin for subscriptions in April, and as they promised they are continuing to experiment.

The paper plans to run ads with printed QR codes, allowing readers to use bitcoin to buy products directly. The first test of this is planned in conjunction with a local ticket exchange for tickets to a Jay-Z/Beyonce show at Soldier Field this summer.

“The implications of this are pretty massive we feel,” Josh Metnick, the chief technology officer at parent company Wrapports, told us via email. “It will allow newspapers or any printed media, for the first time we are aware of, the ability to transact directly with customers, to allow newspaper advertisers the ability to sell directly to consumers reading the paper.”

Also, the paper, which started accepting bitcoin earlier this year, will expand the digital currencies it accepts, adding litecoin, dogecoin, and peercoin.

“We are not stopping at bitcoin.”

The third experiment — and it is exactly that, an experiment — will involve using dogecoin as a conduit for tipping journalists on specific articles. Mr. Metnick said they’re going to move slowly — the initial trial may simply involve the tips going to a given journalist’s preferred charity. He acknowledged there were “editorial ethics” involved, but he feels dogecoin tipping is becoming “the new like,” and somewhere down the road this might even comprise a “fundamental business model change.”