Cameron and Tyler Winklevoss, leaders of Bitinstant’s seed funding, have proposed an idea that should shake a few heads in the bitcoin community. Many people use bitcoin for its decentralized and unregulated nature, but the Winklevoss Twins have proposed creating a regulated Bitcoin exchange in the United States.

The Winklevoss twins became well known for their lawsuit against Facebook creator Mark Zuckerberg, in which they received a $65 million dollar settlement. As of right now, they are trying to open their exchange, Gemini, which should debut in the coming months.

The Winklevoss brothers have been involved with Bitcoin for years now and are said to own about 1% of Bitcoin’s total supply. As of right now, they have assembled a team that will work on the Gemini project, and have secured a US banking partner as well:

“Since last February, Tyler and I have been assembling the Gemini team. Our goal was simple: bring 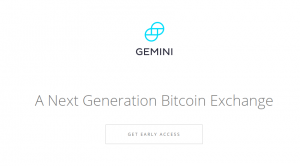 together the nation’s top security experts, technologists, and financial engineers to build a world-class exchange from the ground up with a security-first mentality. It’s true that Bitcoin’s promise is a new, frictionless money, but that all becomes academic if we don’t build towards an ecosystem that is free of hacking, fraud and security breaches. Today, our team is 14 strong (including me and Tyler), 11 of which are pure tech engineers. Our team spans both coasts and embodies decades of tier 1 work experience.”

“We are also thrilled to announce that we have secured a banking relationship with a New York State-chartered bank. This means that your money will never leave the country. It also means that US dollars on Gemini will be eligible for FDIC insurance and held by a US-regulated bank. Your US dollars on Gemini will be as safe and secure as they are in your bank account today.”

As of right now, Coinsetter is the only prominent Bitcoin exchange operating in New York. Coinsetter CEO Jaron Lukasiewicz said in regards to Gemini’s announcement:

“Today’s announcement about Gemini brings to light the importance of establishing a dominant US-based bitcoin exchange.”

“Creating a US-based bitcoin exchange is a challenging project given its security needs, the high performance technology required of an institutional-class system, and the regulatory hurdles that companies must overcome to provide domestic US bank transfers to their customers. Our New York City-based exchange, Coinsetter, has been part of a group of companies confronting this challenge since 2012. After building our

product for almost two years, we released the first truly institutional performance bitcoin exchange this past fall. At this time, we offer the only low latency bitcoin exchange with a full featured FIX API currently available, and we have benefitted from being a New York City based company.”

It will be a tough task to create a fully compliant bitcoin exchange, and whether it will help or hurt bitcoin is yet to be seen. However, if anyone can create such an exchange, it might as well be the people that invested over 10 million dollars in bitcoin.

What do you think about the Winklevoss twins’ idea to start a fully compliant Bitcoin exchange? Let us know in the comments below!