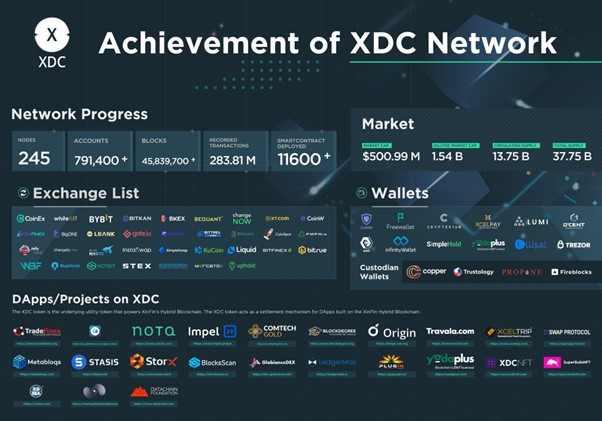 The XDC Network’s mainnet has been up and running for three years as of June 1, 2022. There has been a lot of work done by the XDC Foundation and the XDC community all these years on updates, integrations, and XDPoS 2.0.

At the beginning of its third year, a big event firmly established the XDC Network as a blockchain of choice for corporate use cases. When the first NFT (a single XRC20 token) was launched on the network in September 2021, it was backed by trade finance assets and adhered to special trade finance message protocols.

Members of the World Economic Forum: Global Innovators Community, Tradeteq, were behind creating NFT, while Accelerated Payments provided asset origination services for the transaction. Trade finance assets, which were previously exclusively accessible to a small number of investment banks, might now be made available to the general public through blockchain-based technologies.

As a result of this evolution, the larger investment market, small-to-medium-sized firms (SMEs) situated in developing and emerging economies would have more access to inexpensive trade financing as the technology matures. Thus, XDC’s enterprise application and trade finance capabilities achieved respect in the worldwide trade business.

One of XDC Foundation’s senior advisors is Dr. Fisher Yu, who co-wrote the whitepaper that presents the XDPoS 2.0 update including a new consensus mechanism, military-grade security, and enhanced performance. It emphasizes the network’s low power consumption and backward compatibility.

In other words, the beta testing necessary for the new XDPoS 2.0 protocol, which will be deployed in the first quarter of 2023, is a huge milestone, as indicated by a full year of testing before it goes into effect.

A smaller group of community members supported the project in numerous ways in 2021, including expanding the network and bringing new ecosystem players like exchanges, wallets, and development partners. As the XDC Network’s popularity has grown, the community has become a more diverse yet focused group.

The project has always kept the community at the forefront, and the community has grown drastically over the years. XDC Network Co-founder Ritesh Kakkad recently took to his Twitter handle announcing about the 3 years of completion and how without institutional money and big media hype, the firm has achieved so far.

3years for the #XDCNetwork

Question: how you grow #Blockchain ecosystem without institutional money?
Answer is with Community Support.

The achievements to look upon by the XDC are 283.81M transactions with 45M+ blocks processed in the span of 3 years. The market capitalization estimate is $500.99M, with listing across 34 exchanges. And storage possibilities in both Custodian and Non-Custodian wallets. The XDC token provides the strength offscreen for the Dapps built on XinFin’s Hybrid Blockchain.

The recent inclusion of a tab exclusively for XDC Ecosystem in the CoinGecko, data aggregator site adds a feather to their cap. This eases the information access regarding the XDC to the end-users. These XDC Network-based initiatives, including DeFi, the metaverse, and financial industry applications, will be further developed and expanded by the XDC community.

The XDC Foundation’s mission from the beginning is to decentralize the network further while fostering a community-first development strategy.