Last week, we were firmly back in bullish terrain with jubilant voices standing by bold predictions. Bitcoin and altcoins were all up with Ethereum leading the charge. This Monday, however, we’re back to a red crypto market.

What Caused the Crypto Market Crash?

As Bitcoinist reported earlier today, the weekend was savage for cryptocurrency. The total crypto market cap dumped more than $15 billion in 24 hours, falling well below the $300 billion level we were so excited about last week.

Taking a closer look at the events over the past 48 hours, these would seem to be the 3 most likely reasons for the crypto market crash.

On Friday, Bitcoinist reported that a “lagging” issue caused widespread REKage of traders.

Binance assured traders that the issue was fixed. But that was of no compensation to those who lost thousands due to a glitch that wouldn’t allow them to exit their positions.

And despite being “fixed” in record time, the problem carried on well into the weekend. Binance exchange continued to suffer from ‘performance issues’.

Trades were executed without being placed, prices weren’t being displayed correctly, altcoins dumped when BTC went down… it all sounds rather chaotic. In response to these issues, CZ stated that a report was being produced on the matter and thanked his customers for their support in the meantime.

Writing a detailed report on some of the perf issues we face in the last few days. Will publish in 24h or so. It's not the first time @Binance faced challenges, and it won't be the last time we solve them. We are humbled to have the heaviest traffic in crypto, and your support!?

Of course, that was met with a mixture of replies, as the Binance CEO predicted. Everything from “sh**show” to gratitude (and a whole lot more in between).

One rational trader commented that losing funds and orders “popping in/out of existence” was somewhat more serious than a “performance issue.”

@cz_binance @binance I love Binance and appreciate very much you looking into this, but to call this a "performance issue" is a bit disingenuous. I've had limit orders popping in/out of existence, orders passing but not showing up in either funds or order history & missing funds.

And having the “heaviest traffic in crypto”, these kinds of problems can lead to a cease of trading and widespread chaos across the board–a crypto market crash even.

Over the weekend, TradingView’s top crypto trader, Jacob Canfield, reported that someone had exploited ‘Fulcrum trading’ and made off with $360K ETH.

Looks like there was a flash crash caused by an exploit from Fulcrum trading.

Most likely a buy the dip opportunity once they remove the sell walls.

An opportune hacker was able to make the ETH almost instantaneously in one flash single loan transaction.

Canfield seemed to believe it was most likely a manipulative act to “buy the dip”. But it could have contributed to the wider crypto market crash.

On the topic of manipulation, there were also signs of substantial whale movements over the last 6 days. On February 11, BTC rose 5.39% in a matter of minutes. For the next 4 days, the leading asset whipsawed and broke down briefly to the $10,100 level before correcting back to $10,400. Then, at 15:00 GMT on February 15, BTC suddenly dumped 5% in a single trade. This pattern, dubbed the ‘Bart Simpson pattern‘, is frequently regarded as an institutional manipulation pattern which is employed to shake out weak traders. 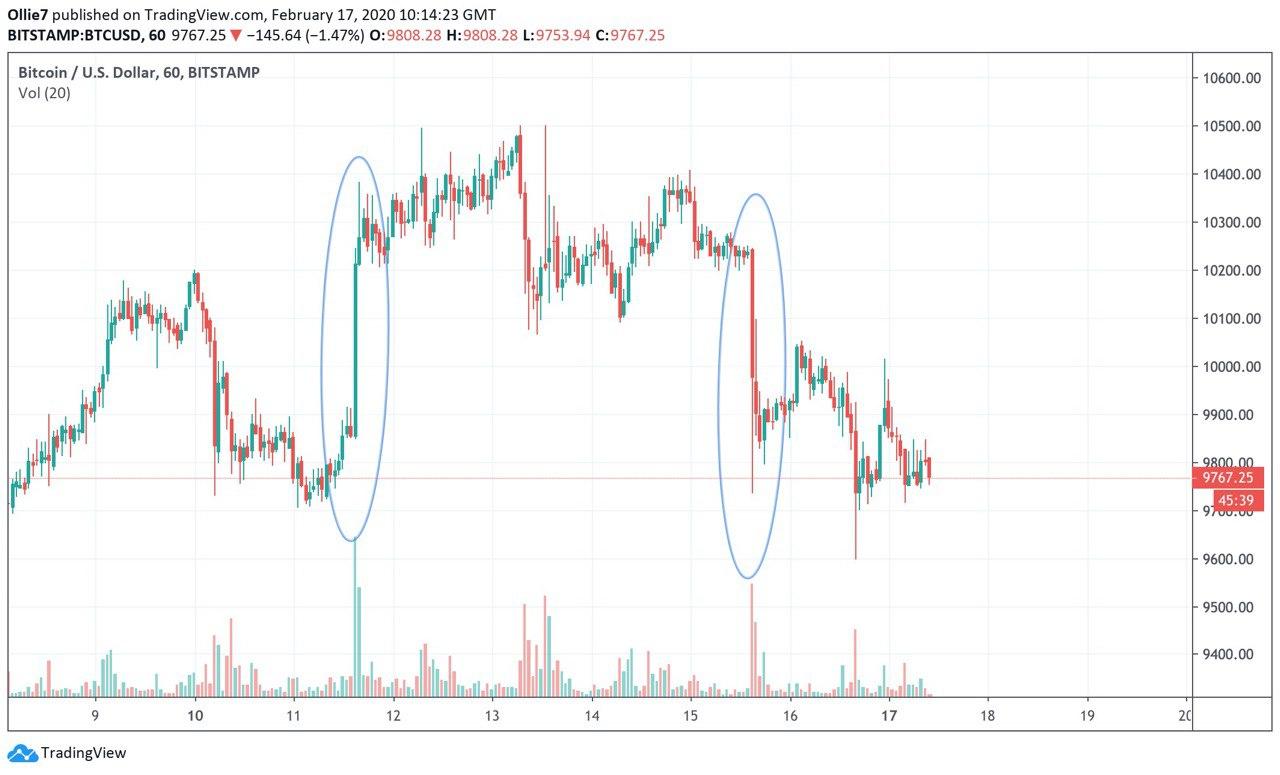 Of course, there are macro factors on top of these that may have contributed to this latest crypto market crash. Treasury Secretary Steven Mnuchin’s warning of “significant” new cryptocurrency regulations last week is hardly bullish. Frankly, it sounds more than a little ominous.

Adding to the anti-crypto sentiment in the U.S., was the Department of Justice calling bitcoin mixing “a crime”. The Minneapolis Federal Reserve President Neel Kashkari also gave his 2-cents labeling cryptocurrencies “a giant garbage dumpster.”

Unfavorable regulation on the horizon is never a good sign. Although, the markets failed to react at the time of the news.

So, this time around, it looks more likely that it was an accumulation of inside jobs. If bitcoin fails to hold the $9,700 support level, we could see a tumble all the way back to the $8K region. Happy Monday!

Why do you think the crypto markets have crashed today? Add your thoughts in the comment section below!