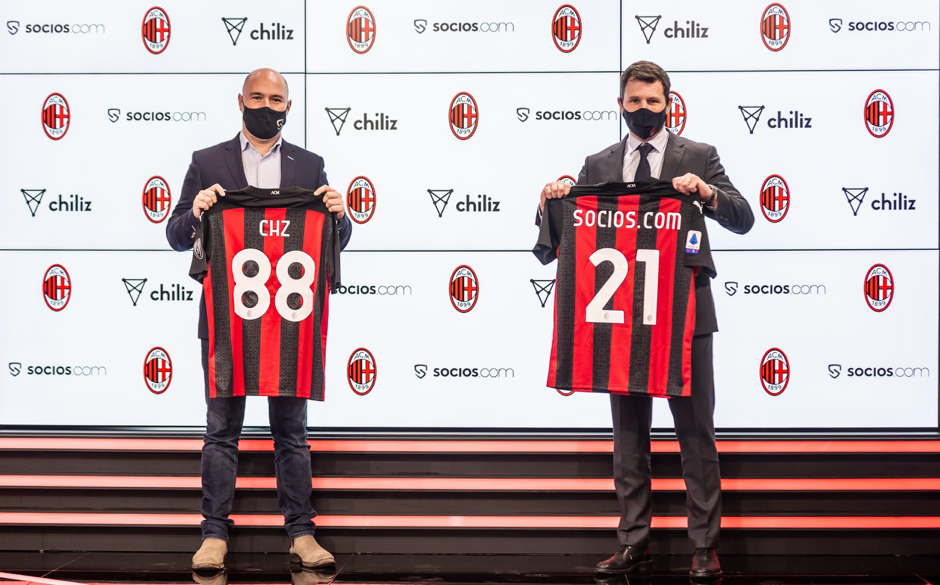 AC Milan is among the most successful clubs of all time, with 18 FIFA and UEFA trophies to their name in addition to 18 Serie A titles and a massive global fanbase estimated at 450 million, including a significant following throughout Asia.

$ACM Fan Token owners will be able to access a wide range of benefits including the right to vote in multiple club decisions each season, VIP rewards & experiences, exclusive club and sponsor promotions, games, competitions, and ‘super-fan’ recognition.

The club joins a list of 19 major sporting organizations that have partnered with Socios.com to launch Fan Tokens, including FC Barcelona, Juventus, Paris Saint-Germain, AS Roma, Atlético de Madrid, Galatasaray, and Trabzonspor. Leading esports organizations Team Heretics, NAVI, OG and Alliance have all launched Fan Tokens on the platform, while UFC have signed a global fan engagement agreement and fellow MMA organization the Professional Fighters League will launch a Fan Token in the coming months. More major clubs are set to launch Fan Tokens in the near future.

Notable examples of fan engagement through Socios.com include fans of Apollon FC choosing the first team for a friendly match and the club’s home and away kit for the 2021/22 season. Juventus fans chose the club’s new goal celebration song, decided on a limited-edition redesign of the iconic ‘J’ logo and the first team bus for the 2020/21 season. Supporters of FC Barcelona placed a unique fan designed artwork at the heart of the Camp Nou dressing room, Roma fans delivered questions directly to head coach Paolo Fonseca in a live press conference and PSG fans chose a unique message for the captain’s armband as well as voting on their end of season awards through the app.

Powered by the utility token Chiliz $CHZ, Socios.com is one of the most active non-financial, consumer-facing mainstream blockchain products in the world. In just over a year it has been downloaded by more than 450,000 people, over 14M Fan Tokens have been sold, and over 700,000 votes registered on the blockchain. In total, Fan Tokens have generated over $30M USD for clubs and partners in a little over 12 months. In late December and early January, several Fan Tokens were listed on major global exchanges driving significant activity, with $PSG and $JUV trading volumes hitting a 24 hour high of $300M in late December.

Fans who purchased ‘Milan Devils’ Tokens using Socios.com pre-sale feature Locker Room will have their tokens transformed into $ACM Fan Tokens upon launch. Locker Tokens for Manchester Blue and The Galácticos have sold out.

“We are happy to join hands with Socios.com and welcome them to our family as a global partner. This partnership allows us to give our 450 million fans across the world another exciting way to interact with AC Milan, which is particularly important under the current circumstances created by the Covid-19 pandemic.

“As an innovative Club, one of our focus areas is modernization and this partnership helps us complete another important step in that direction.”

Alexandre Dreyfus, CEO and Founder of Chiliz and Socios.com said:

“I’m delighted to welcome AC Milan and their 450 million fans from across the world to Socios.com.

“Fans of the I Rossoneri  will be able to enjoy unprecedented engagement with their favourite team, influencing the club in polls, accessing VIP rewards, exclusive promotions, chat forums and much more.

“The AC Milan partnership is a great start to a year in which we will work harder than ever on our mission to fully establish Fan Tokens as the ultimate fan engagement tool and as a powerful new revenue generator for the sports industry.”

Chiliz ($CHZ) is a fintech blockchain company that provides sports & entertainment entities with tools to help them engage & monetize their global audiences. The company’s consumer-facing app Socios.com launched in late 2019. To date, 20  major sporting organizations, including FC Barcelona, Juventus, and Paris Saint-Germain have partnered with Socios.com to launch Fan Tokens.

Fan Tokens are digital assets that provide owners with engagement opportunities, including voting rights in exclusive polls.Fan Token owners can also connect with other fans in Socios Chat, access exclusive organization, and sponsor-related promotions, enjoy VIP rewards and take part in games, competitions, and quizzes on the app. In early 2020 Chiliz launched Chiliz.net (Chiliz Exchange) the world’s first tokenized sports exchange, with the goal to create a new ecosystem, drawing participation from sports fans and cryptocurrency enthusiasts who can trade and exchange Fan Tokens on the platform. All of these projects are fueled by the Chiliz token ($CHZ), a chain-agnostic digital currency that is currently available on leading crypto exchanges around the world, including Binance.

Why It Is Important To Invest In Runfy, Tezos, And Chiliz

Why Are These Celebrities Getting Involved With Binance, Big Eyes Coin, and Apecoin?

An Investment In Big Eyes Coin, Solana, And Avalanche Could Turn Into A Fortune