Analysts Expect Bitcoin to Rally to $19,000 Next Despite Spike in Funding

Bitcoin and the entire crypto market saw some immense volatility yesterday that came about after the benchmark crypto saw a sudden surge up to highs of $18,600.

The selling pressure that existed at this price level was so intense that it sparked a $1,200 selloff that sent the crypto to lows of $17,400.

From here it saw a “V-shaped” recovery and rapidly pushed back towards $18,000. It has been consolidating just below this level ever since.

One trader does believe that a push even higher is imminent in the near-term. He targets $19,000, noting that this could come about despite a rising funding rate and premium.

At the time of writing, Bitcoin is trading up just under 1% at its current price of $17,800. This is around where it has been trading throughout the past day.

Overnight, bulls were able to catalyze a strong push higher that sent it to highs of $18,600. The selling pressure here was intense, suggesting that this rally over-extended itself.

It then faced a sharp move lower that likely came about due to an abundance of late long positions. This move sent it down to lows of $17,400.

Analyst: BTC Likely to Continue Towards $19,000 Despite Selloff

One trader explained that the underperformance of altcoins seen as a result of Bitcoin’s recent volatility suggests that attention is about to shift back onto BTC and allow it to outperform the rest of the market.

He is targeting a move up towards $19,000, although rising funding rates do provide a reason for concern. 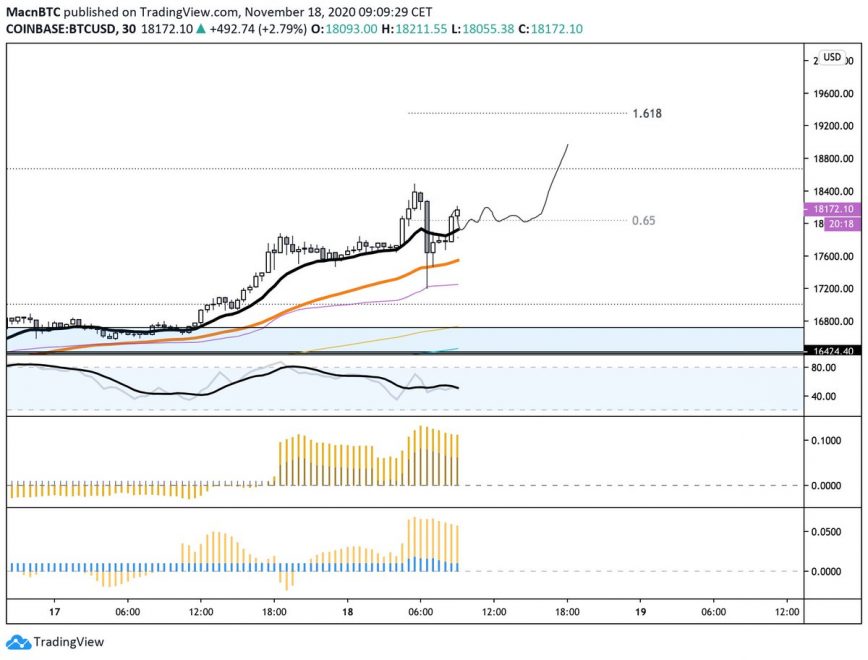 Whether Bitcoin can gain a strong foothold above $18,000 should provide some serious insights into its short-term outlook.