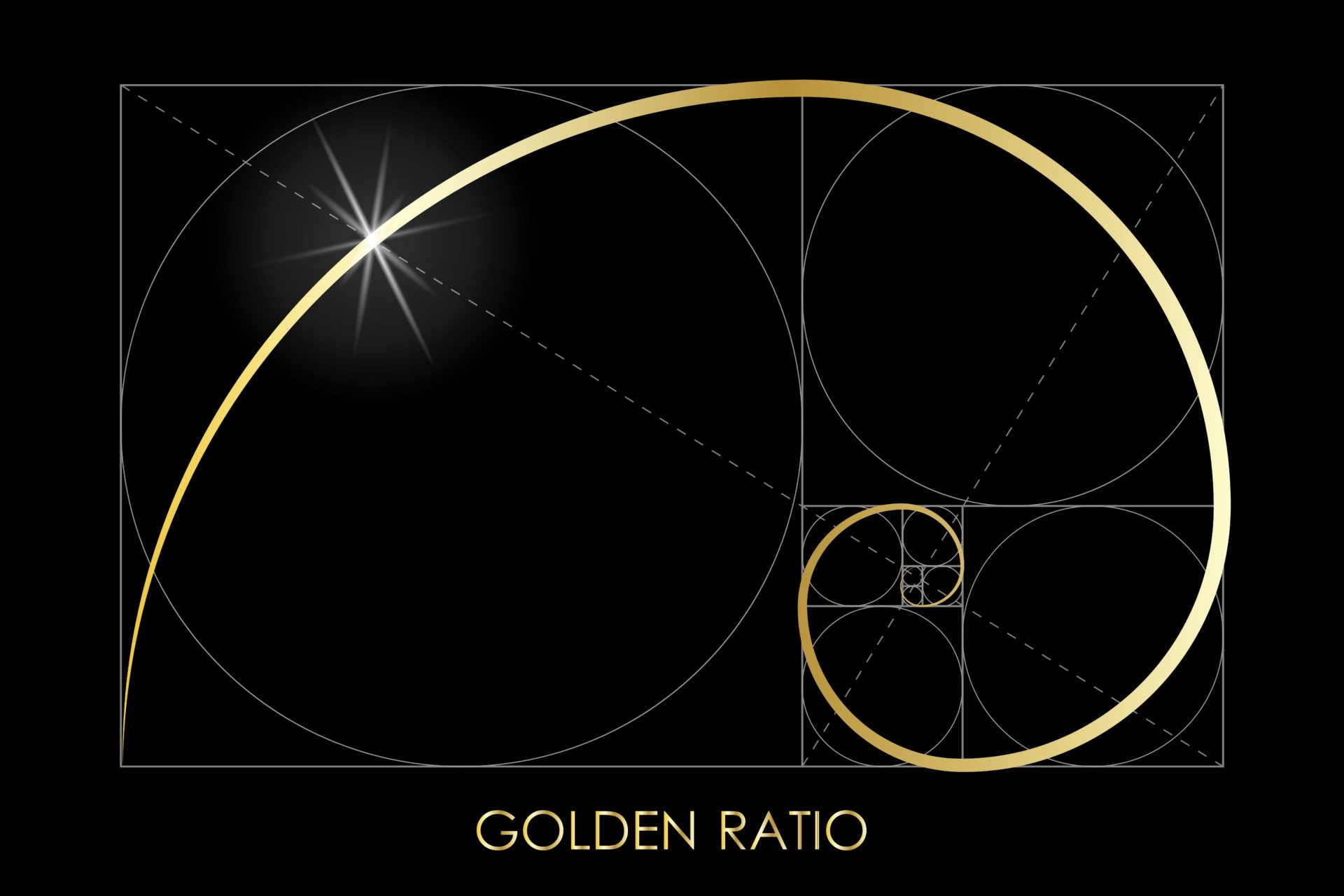 Bitcoin Analysis and Its Secret Love for Fibonacci Levels

Long utilized in disciplines like art and architecture, the Fibonacci sequence is also highly useful for analyzing Bitcoin trends.

Before we get into the analysis of Bitcoin (BTC) [coin_price], I want to familiarize our readers with Fibonacci Numbers.

I have been studying the Fibonacci sequence and its applications in investing and trading for over a decade, and find it a very fascinating topic of study.

Fibonacci is a mathematical sequence devised by its namesake, Italian mathematician Fibonacci, while trying to determine the breeding pattern of rabbits.

Fibonacci Retracement and Fibonacci Extensions are very common tools for use in trading and Investopedia did a great write up that you can read more about here.

On a short-term analysis, Bitcoin finally found some movement last night as it retested the $6500 – $6550 trend line that had previously been a strong resistance dating back to late July. 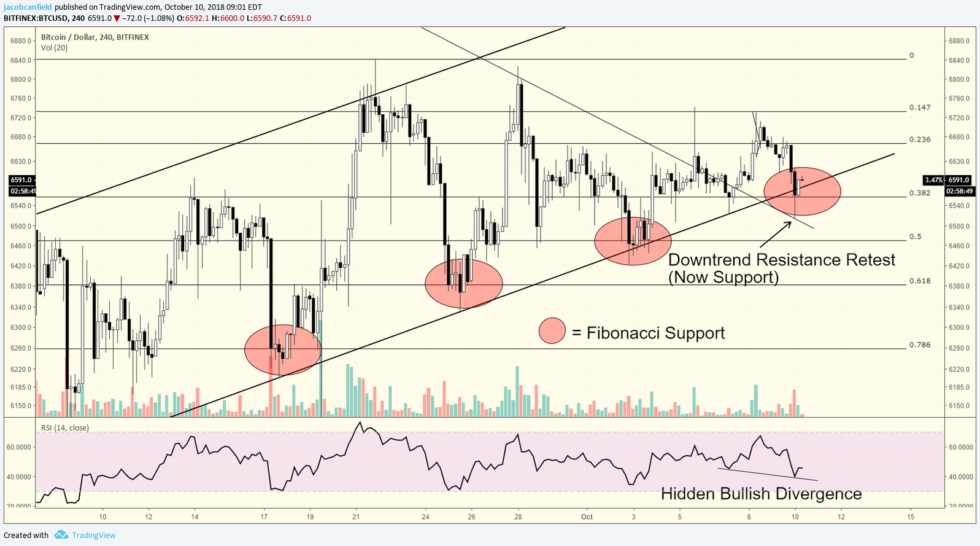 After Bitcoin broke out above the trendline, we waited for a long entry on the pullback. We also waited for a retest of the previous resistance in hopes that it would turn into support, which it did as you can see below. 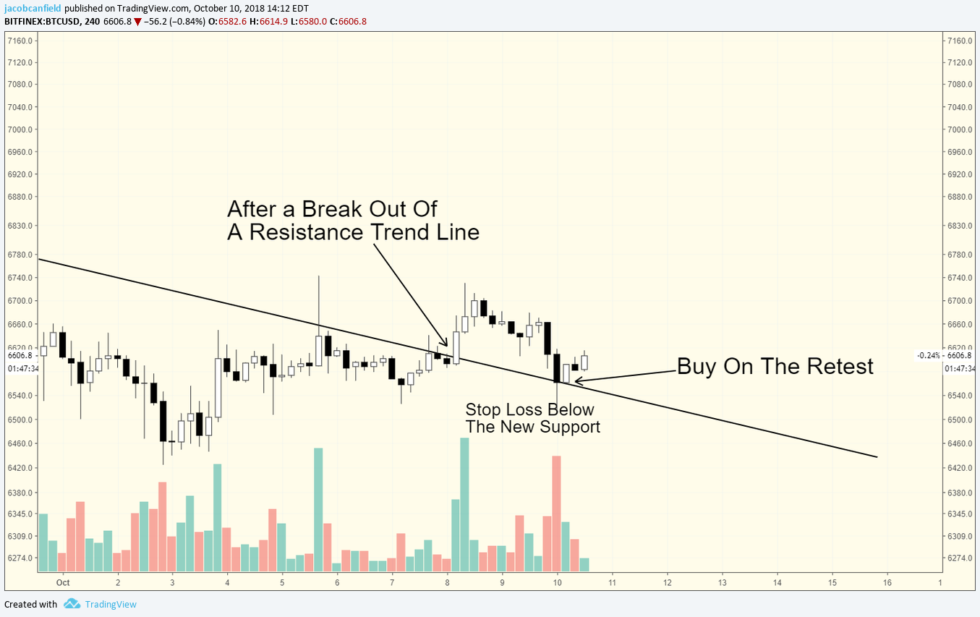 If you take a look at my chart below, you can really see how much Bitcoin respects the Fibonacci levels on the mid-term Fibonacci trend, just as well as it follows our short-term Fibonacci movements. 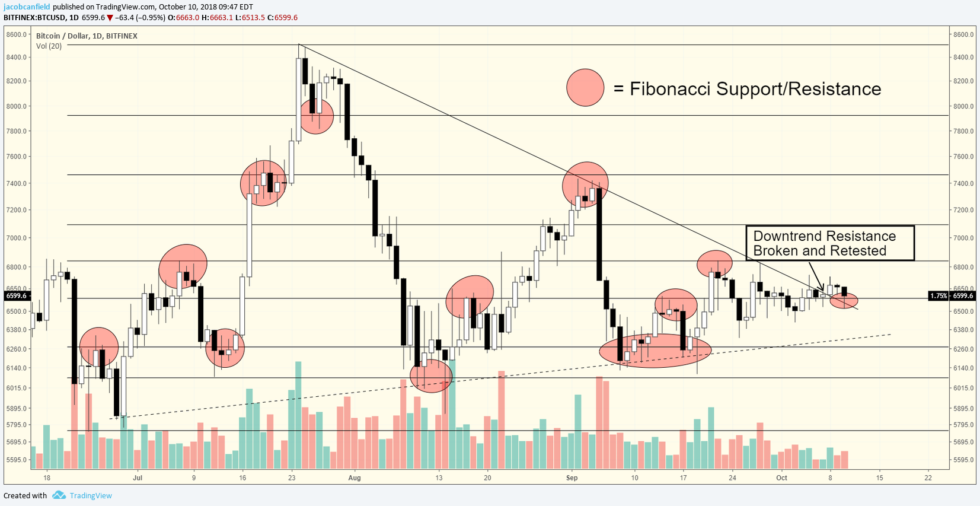 The confluence of the .382 Fibonacci level and the previous resistance turned support line was a great buying opportunity as buyers stepped in support the price.

The diagonal downtrend that we’ve been watching on the daily was finally broken and retested, which is the point of entry for a good break out trade.

As seen on the chart above, Bitcoin has also been finding support on each of the Fibonacci levels as it grinds it’s way upwards and currently sits on the .382 support.

Even though the RSI (relative strength index) has gone down, this can actually be viewed as a positive when the price goes up. This is known as a hidden bullish divergence for a continuation. It also gives the RSI a nice reset and the fact that it bounced off of the 40 RSI is typically an indication that we may be starting an uptrend.

Trader Tip: The Relative Strength Index (RSI) is a great tool for measuring overbought and oversold zones on a trading chart, but has many more uses and is a favorite tool among professional traders.

If we break down from the rising channel with strong volume, then I’ll worry that we’re going to see a big move down, but most of the signs are pointing to a bullish move.

From a longer-term time frame, I wrote up a long analysis on Trading View highlighting some new Fibonacci numbers that I had used for determining resistance and support levels for weekly/monthly analysis.

Bitcoin hit the 17.944 Fibonacci Extension and has fallen down to the 5.618 Fibonacci extension and is currently holding it as support.

If you’re not familiar with these higher Fibonacci numbers, it’s because they’re relatively new.

I recently created the ‘Canfield Fibonacci’ Numbers and began applying them to financial markets. I found that they are pinpoint accurate for long-term trends.

If you’d like to experiment with them, you can calculate them using the Fibonacci sequence and get the following:

Make sure you’re using any number past 13 in the sequence.

Using these numbers, experiment with them on longer time frame charts like the Dow Jones, Amazon, Apple, S&P 500 and see what you can come up with. I’ve found that the 17.944 shows up a lot, and is the same Fibonacci extension that rejected both Gold and Bitcoin.

Everyone is still waiting for a big move out of Bitcoin, but every time Bitcoin gets boring over the past two years is when I turn to altcoins. Big moves out of Bitcoin usually spell disaster for the altcoin market, so we like it when Bitcoin stays quiet for a while.

Thanks for reading and if you enjoyed the article, make sure you click the heart and leave a comment below.

I’ll be sure to read them and respond to as many as I can.

What are your thoughts on Bitcoin’s relationship with Fibonacci numbers? Don’t hesitate to let us know in the comments below!