Bitcoin has been struggling to maintain its multi-month uptrend, with the selling pressure found within the upper-$19,000 region stopping it from seeing any major gains throughout the past few days and weeks.

The selling pressure seen here isn’t surprising, as analysts have long forecasted that bears would try to defend against a break above the cryptocurrency’s all-time highs.

Until it can break above this level, it will likely continue facing prolonged bouts of consolidation. One trader believes that it may also see some serious downside until it can gain a footing above $19,500.

At the time of writing, Bitcoin is trading down just under 2% at its current price of $19,100. This marks a serious climb from its recent lows of $18,700 set at the bottom of the overnight decline.

This decline came about shortly after BTC tapped highs of $19,500. The fact that it has once again set what appears to be a higher-low is incredibly bullish and could indicate that upside is imminent.

One trader believes that the lack of price acceptance above $19,500 is a grim sign that may indicate downside is imminent.

He spoke about this in a recent tweet, explaining that he expects continued weakness until this level is firmly broken above. 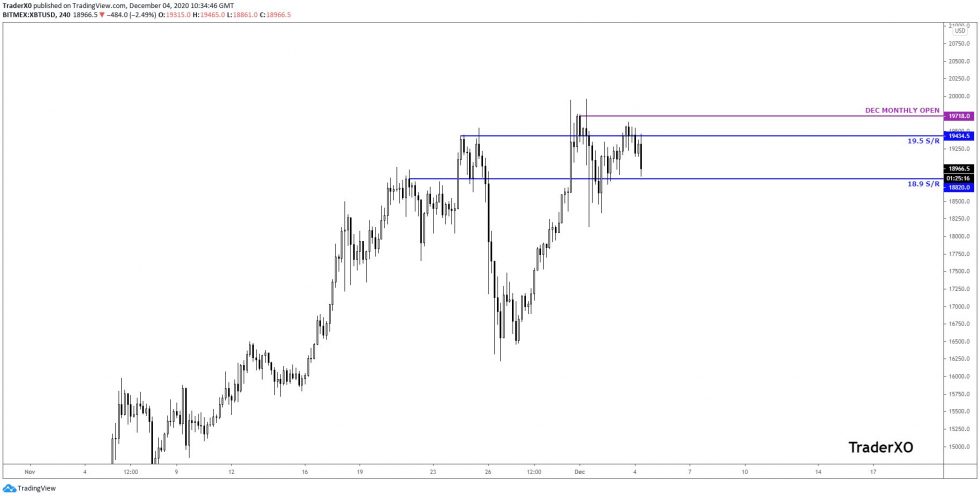 The coming few days should shine a light on Bitcoin’s outlook, as it is currently trading at a pivotal point. Any decline or rise from here could determine its trend throughout early-2021.