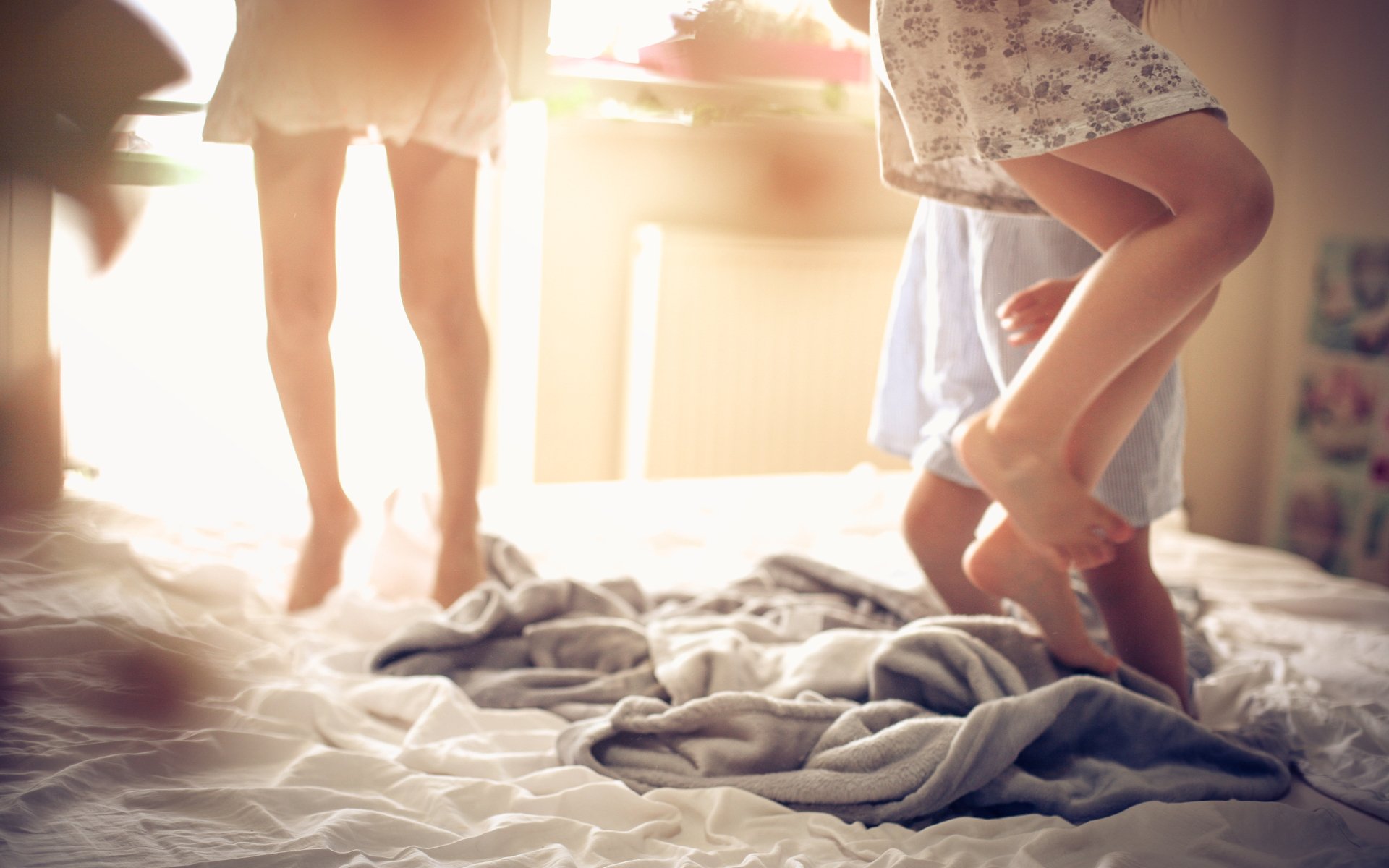 Bitcoin Price Analysis: BTC and Altcoins Were Jumping on the Bed

Bitcoin fell off and bumped its head after strong rejection at $7,684. Bitcoin price analysis, however, shows that former resistance levels are now serving as strong supports as BTC consolidates and prepares for the next leg up.

This week encouraging cryptocurrency news keeps on rolling in and a simmering aura of excitement is beginning to envelop the entire cryptocurrency scene as investors await the result of the SEC’s acceptance or rejection of Bitcoin ETFs. On July 20th, the CME announced that the daily volume of Bitcoin futures had risen by 93 percent from Q1 to Q2, while the number of open contracts is up 58 percent.

Meanwhile, Coinbase is rumored to have arranged a partnership with a $20 billion hedge fund and is in the process of seeking additional partnerships so while said apprehensively, perhaps this is the advent of institutional investors dipping more than just a toe into the cryptocurrency market. 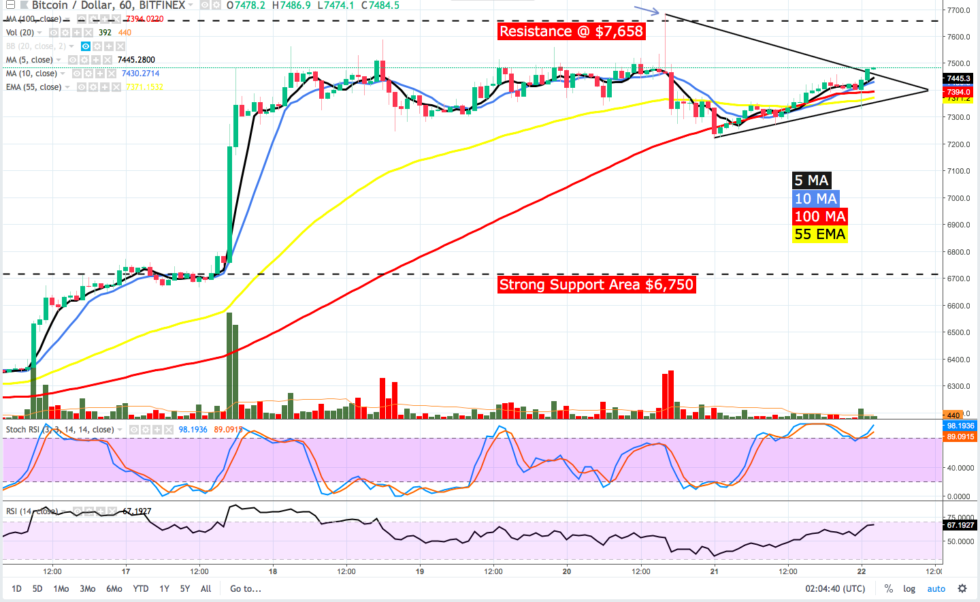 As shown by the 1-hour chart, bitcoin’s bullish stance has begun to soften as the 5 and 10-day MA are still angled upward above 20 and 100-day MA but also beginning to flatten. The gap between the 5 and 10-day MA has started to narrow, which indicates the presence of bearish pressure and, since yesterday, the Stoch has descended from oversold territory and the RSI also declined from 66 to 52.

BTC [coin_price] was strongly rejected from $7,687 and at the time of writing BTC rides along the 20-day MA which is serving as a soft support. Selling volume has also increased and bitcoin appears to trade somewhat indecisively as it tightens in the narrowing triangle.

A glance at the 4 hour and daily chart alleviate any worries caused by the 1-hour chart as BTC appears to have moved up a leg and now consolidates in a tightening range before attempting a second attempt at the $7,658 resistance. 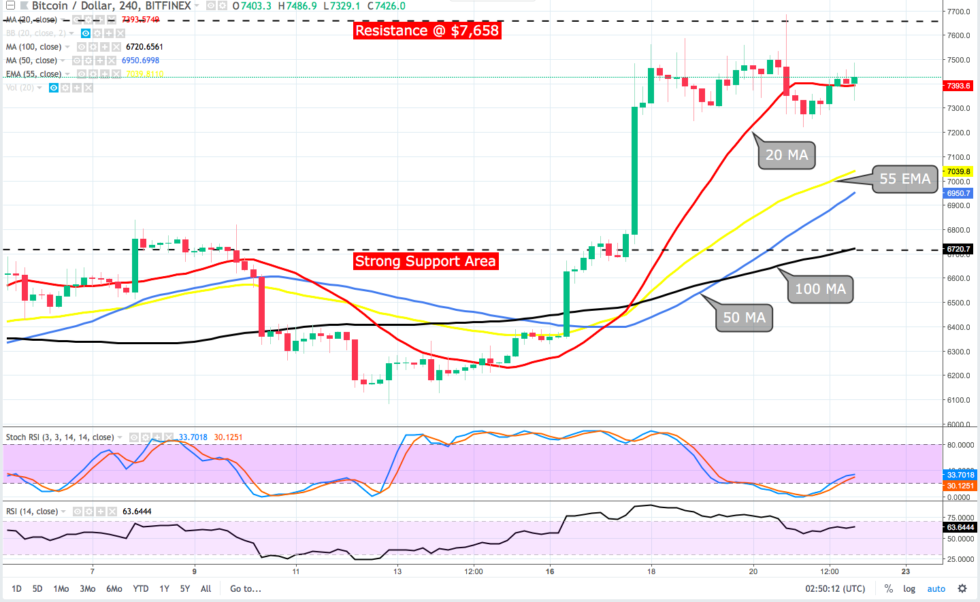 As noted on the 1-hour chart, the 20-day MA has flattened and BTC rides along the top of the 20. BTC remains above the 50 and 100-day MA, with all continuing an upward path and the most likely short-term scenario is for BTC to trade in a tightening range before attempting to overtake the $7,658 resistance for the second time.

In the event of a reversal, BTC has support at $7,350, $6,750 and $6,500. At the time of writing the Stoch is rising from oversold territory while the RSI has flattened and wavers in bullish territory.

As noted in the last analysis, BTC remains bullish for the short-term as the path of least resistance should follow the upward trend based on the position of the moving averages.

After reaching a new shelf, BTC appears range-bound between $7,300 – $7,550 as it consolidates before attempting a second attempt at the $7,658 resistance.

There are ample supports below the current trading range meaning the likelihood of dropping to recent swing lows sim, but if BTC were to fall below the bullish trendline, a revisit to $7,223 and $6,750 could occur.

As volume tapers off, traders should continue to keep an eye on volume, along with the 5, 10  and 20-EMA on the 1-hour chart.