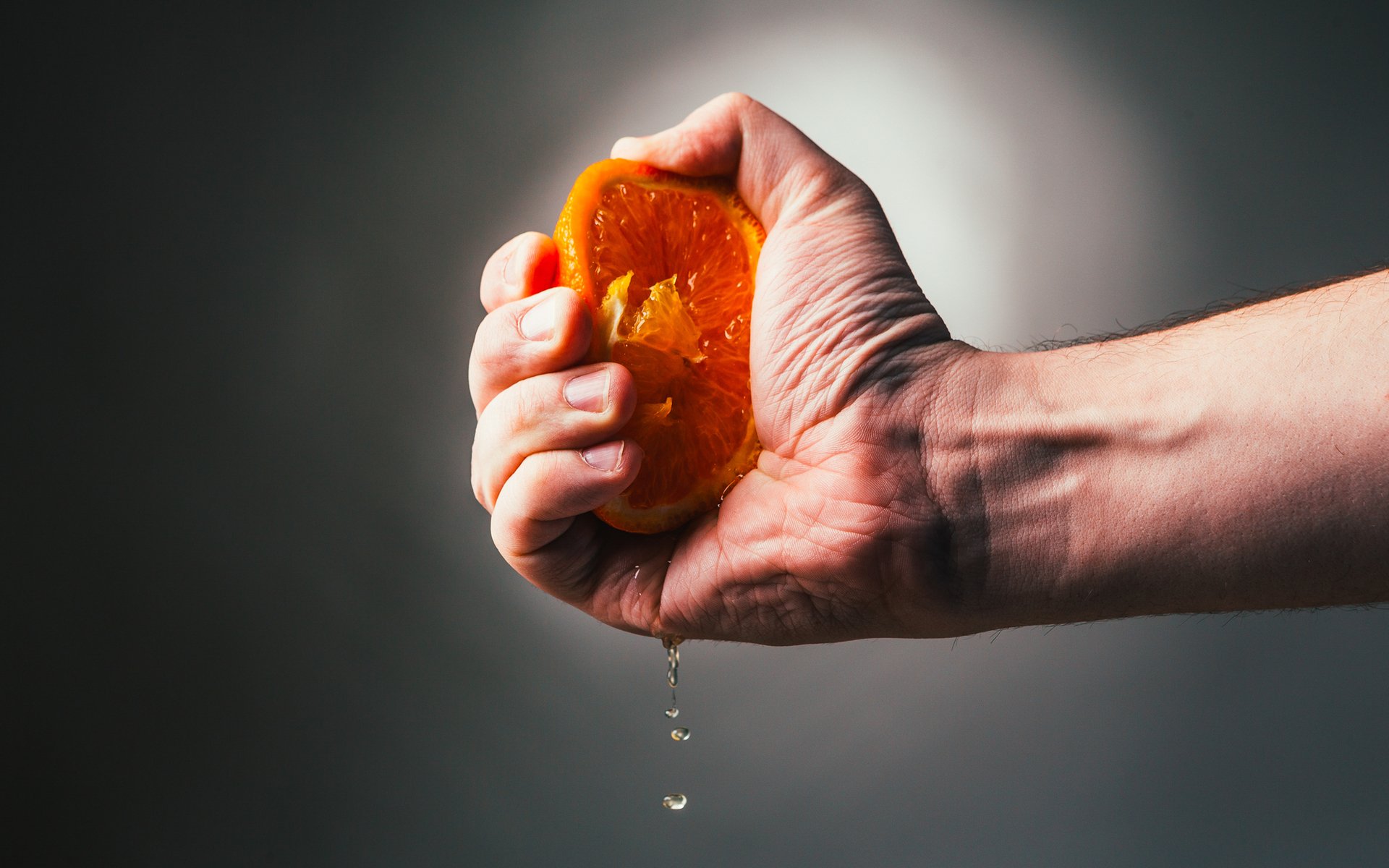 This time yesterday it appeared that all was lost, as Bitcoin price slipped within $100 of the current 2018 low. Then something unexpected occurred. Perhaps shorts got squeezed out of their loftily precarious positions or was it Tether’s newly minted $130 million USDT that saved the day?

Bitcoin [coin_price] spent the better part of the day fighting off bears and the cryptocurrency managed to post an impressive 10% gain as it briefly crossed above $6,600. Eventually, buyers became exhausted and BTC pulled back to the $6,200 to $6,300 range.

While today’s rally was pleasantly surprising, a bullish reversal is yet to be confirmed and just like last week, its possible that Tether could have intervened to save the day by injecting $130 million of newly minted USDT into the cryptocurrency market. Perhaps this is why we see BTC price quickly cooling off after such an impressive run.

For those that believe today’s movement was the result of shorts being tapped out of their positions, feel free to have a look at the fantastic BTC Shorts vs Longs piece FilbFilb concocted earlier this week. It’s not likely that shorts were squeezed out of their positions as today’s $500 gain was drawn out over a series of hours rather than the lightning quick ascension that is characteristic of a short squeeze.

In other news, Arthur Haynes is feeling mighty confident as today he prophesied Ethereum [coin_price coin=ethereum] could drop as low as $100 before the bear market ends.

At this point, a conspiracy theorist might began to propose that billionaire cryptocurrency exchange owners are walking the dog on a tightly tethered leash — but we digress and deviate from the main purpose of this piece… 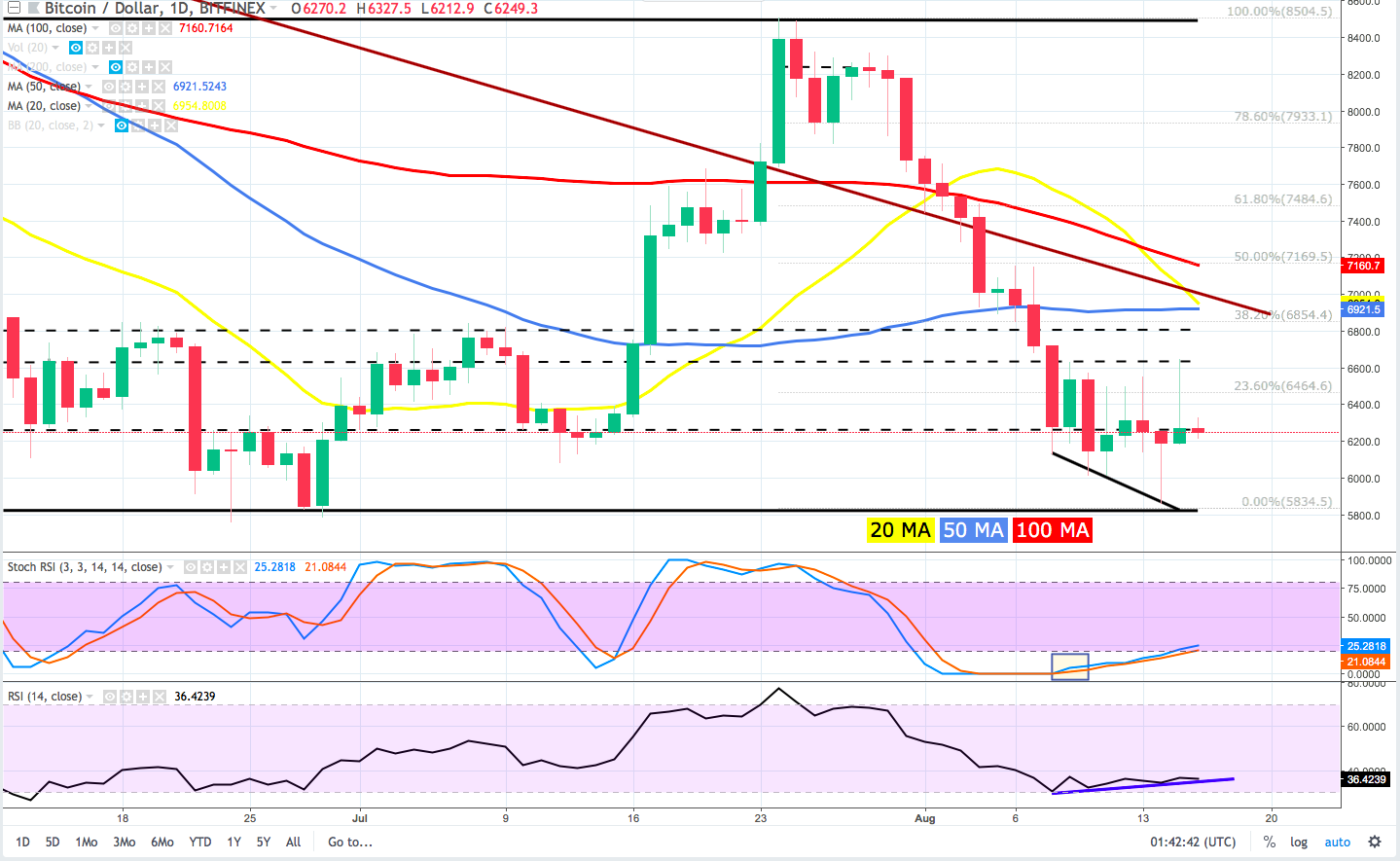 A clear divergence can be seen on the RSI which when compared to BTC price action in the daily chart signaled the possibility of a bull breakout. Around the same time, the MACD exhibited a bullish crossover in spite of BTC declining.

While $6,300 is probably not the bottom, it has thrice served as a strong support and pivot point for BTC and today was no exception to the rule. Today’s pop brought BTC above the 23.6% Fib retracement level and slightly above the $6,651 resistance for a moment.

A move above the key resistance at $6,800 would place BTC within earshot of the 20 and 50-day moving averages which are also set slightly above the 38.2% Fib retracement level, and right at the upper trend line of the 8-month old descending channel.

In the current climate, BTC [coin_price] tends to quickly pull back below the closest moving average(s) after high volume spikes such as the one experienced today. Thus, a daily higher low, followed by a higher high is required to inspire further confidence in the bulls and set the pattern of price consolidation that will help bitcoin move up another leg. 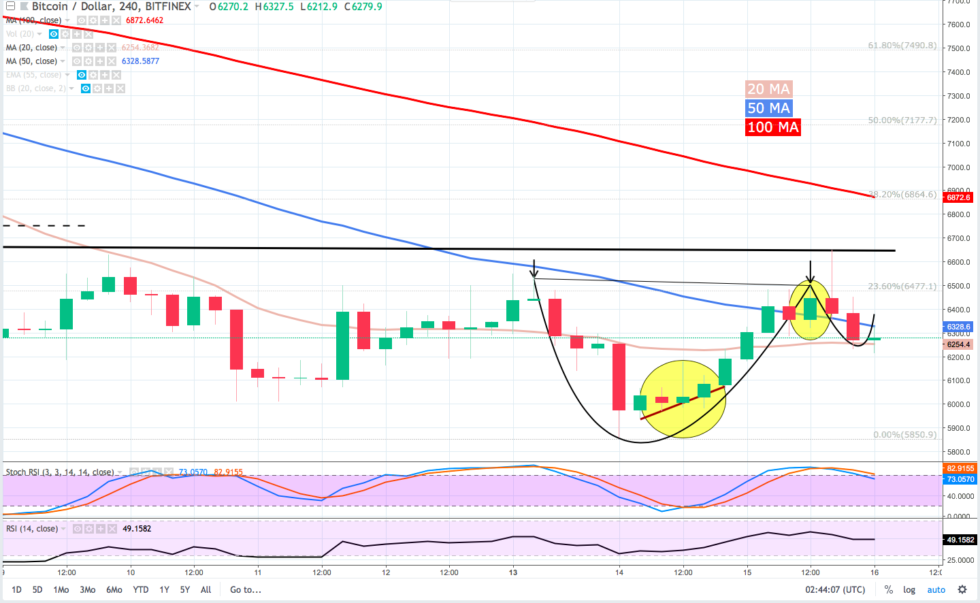 The completion of an inverted head and shoulders formation failed to lead to an upside move for BTC but yesterday the 4-hour chart showed the development of an inside bar (1st yellow sphere) and the beginning of a bull flag (upward trendline in the first sphere) pushed BTC over the $6,545 resistance.

Strong follow through from buyers and a bullish cross of the 5 and 10-hour MA allowed BTC to reach the neckline of the cup at $6,503. The ensuing price gains led to the near completion of a rather sloppy cup and handle pattern and currently we are waiting for bulls to follow through and complete the upper half of the handle at $6,503.

As with the daily chart, a 4-hour higher low, followed by a higher high would help BTC to consolidate in preparation for reaching the next price shelf.

At the time of writing, BTC is pinned between the 20 and 50-day MA and needs to sustain above one of the two in order to maintain momentum, but the pattern of rejection at the moving averages still rings true when observing price action on the 15 minute, 30 minute, 1-hour, 4-hour and daily chart.

Similar to the weekend, BTC could return to its pre-Tether inoculation range of $6,100 – $6,350 and trade indecisively before making a move.

We need to see bulls follow through by setting a higher low, followed by a higher high on the daily chart in order set the pattern of consolidation that will move BTC up another leg.

A move above the key resistance at $6,800 would place BTC above the 38.2% Fib retracement level and slightly above the descending trend line.

As mentioned over the past few weeks, ambitious traders could continue to execute relatively easy trades as BTC bounces from the $6,000 – $6,100 support and also has support at $6,300.

Where do you think the price of Bitcoin will go? Let us know in the comments below!