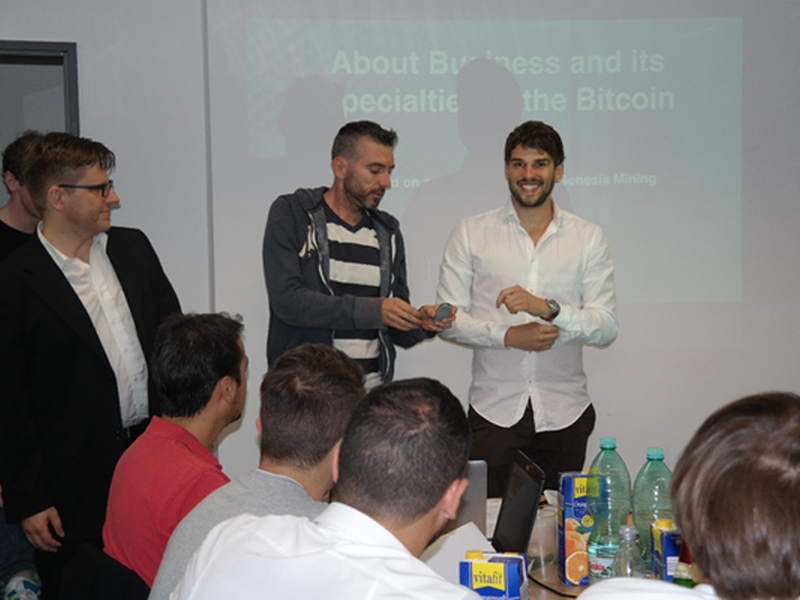 Bitcoin Startups Munich, a business networking group that connects Bitcoin entrepreneurs and is building an ecosystem of Bitcoin startups, met for the first time on the evening of Thursday, August 28th. The event took place in the premises of Opentabs, a payment processing and e-commerce start-up in East Munich.

Attendance at the inaugural event was higher than expected; although the organizers had received twenty RSVPs, over 50 attendees were on hand. A diverse crowd was on hand – software developers, journalists, investors, students, and entrepreneurs, including a founder from Vietnam who provided an overview of the state of the Bitcoin ecosystem in South-East Asia.

The event began with a brief introduction and welcome speech by Dr. Bastian Brand and Cris Genc, the two main organizers of the event. Dirk Röder provided a summary of Bitcoin’s fundamentals to those in attendance who were new to the topic of crypto-currencies. Marco Streng gave a presentation on his experiences at Genesis Mining, a German mining operator, and stressed the rapid pace of innovation in the sector.

After a short networking break, a lively discussion followed with a guest appearance from Dominik Weil, manager of Bitcoin Vietnam, the leading Bitcoin exchange in Vietnam.

In light of the overwhelming interest and support the decision has been made to host a monthly meeting going forward. To reflect the growing number of attendees the next session, which will focus on Bitcoin’s attributes for consumers, will be held in a larger location.

“Having visited a number of Bitcoin conferences and met with many Munich Bitcoin enthusiasts, I had the sense there was a real need to create a new networking platform that features presentations by experts and that provides access to consumers, investors or journalists. This was the catalyst for Bitcoin Startups Munich. Now, after we have concluded our first meeting I am overwhelmed by the audience’s positive reception and extremely grateful to all those who have helped to organize this event.”

“I just can congratulate the organizers of putting that together and hope they can keep the pace and the spirit show so far. In case this is going to happen, I believe that Munich can soon establish itself as another Bitcoin Hotspot in Germany besides Berlin. Especially in times were unthoughtful regulatory approaches by the authorities are strangulating the German Bitcoin Startup scene, it is great to see that people are still pushing forward to avoid the complete ossification of the German Bitcoin scene – despite unreasonable regulations by the powers that be and the – as a logical result – caused brain drain of young German entrepreneurs to locations abroad, were they actually can execute their ideas. Therefore we should all be thankful to people like Bastian and his co-organizers, who have not given up on Germany as a place of innovation – and I hope they will be able to reap the rewards of their efforts in time”