With a few weeks still left in 2018, the total Bitcoin trading volume for the year has already crossed $2 trillion. Many countries have also seen record BTC trading volume at different points of the year with more everyday people seemingly adopting the popular cryptocurrency.

Bitcoin Trading up 61 Percent Since 2017

This volume of trade is especially profound given the tirade of criticism from vocal naysayers who continue to engage in Bitcoin bashing. According to Satoshi Capital Research, the notional value of BTC traded so far in 2018 stands at $2.2 trillion.

The figures posted so far represent a 61 percent increase from last years total volume of $870 billion. However, the growth recorded in 2017 – 96 percent still dwarfs that recorded in 2018 and will remain so unless a massive spike in BTC trading occurs between now and the end of the year. 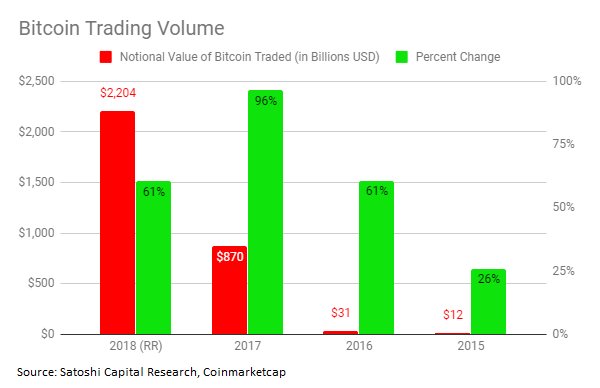 To put things in perspective, Mastercard recently published its Q3 2018 financials which showed a total transaction volume of $4.4 trillion for the year. The world’s second largest payment card company also settles about $12 billion worth of transactions per day.

From these figures, Bitcoin [coin_price] is already at half the transaction settling capacity of Mastercard despite losing close to 70 percent of its value during the year. BTC’s daily volume which is at $8 billion, isn’t a million miles away from Mastercard’s.

Why do the Nocoiners Rage?

Some might argue that the analysis above is akin to comparing apples and oranges. This is because Mastercard’s figures only cover payments made to retail merchants on both online and offline platforms. The figures for Bitcoin come from merchants, futures trading, exchanges, and even international payments.

However, the fact that a cryptocurrency with a sub-$100 billion market cap is posting figures in the same ballpark as Mastercard is a glowing endorsement of BTC’s uptake. This assertion is especially true given the negative rhetoric espoused by critics such as Paul Donovan of UBS who recently said that the world’s most popular cryptocurrency Bitcoin is on the verge of falling apart.

Things may even get better for cryptocurrency trading as a whole. Earlier in the year, Bitcoinist reported that digital currency trading might grow by 50 percent in 2019 based on a study by Satis Group.

Do you think the 2018 Bitcoin trading volume negates the “Bitcoin is dead” argument espoused by vocal nocoiners? Let us know your thoughts in the comment section below.