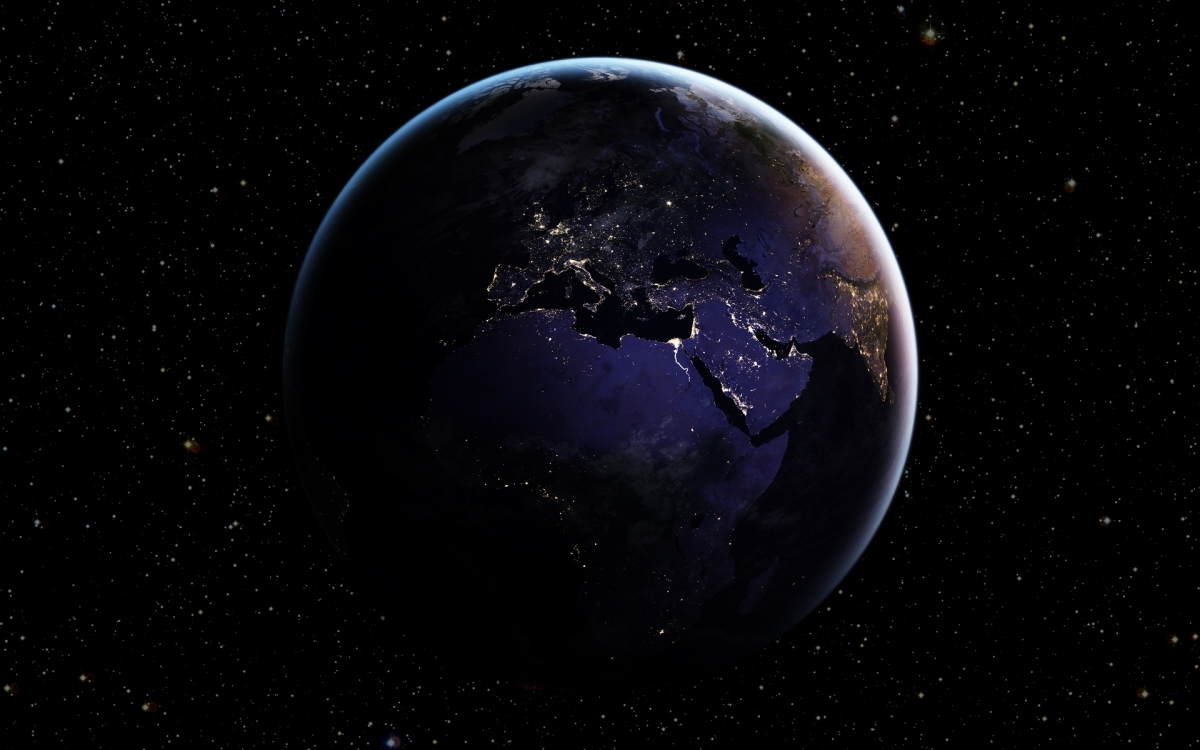 As Bitcoin continues to break new price records, people in cities around the globe are turning to the internet to find out more.

As Bitcoin continues to rally, this time nearing the $2,300 mark, its worldwide popularity has become undeniable. With over $36 Billion in market capitalization Bitcoin is slowly walking towards mainstream adoption, a long and arduous journey that began more than eight years ago. Not only are millions of dollars pouring into Bitcoin’s market cap everyday from new investors, many users that have yet to invest are turning to internet search engines in order to find out how. 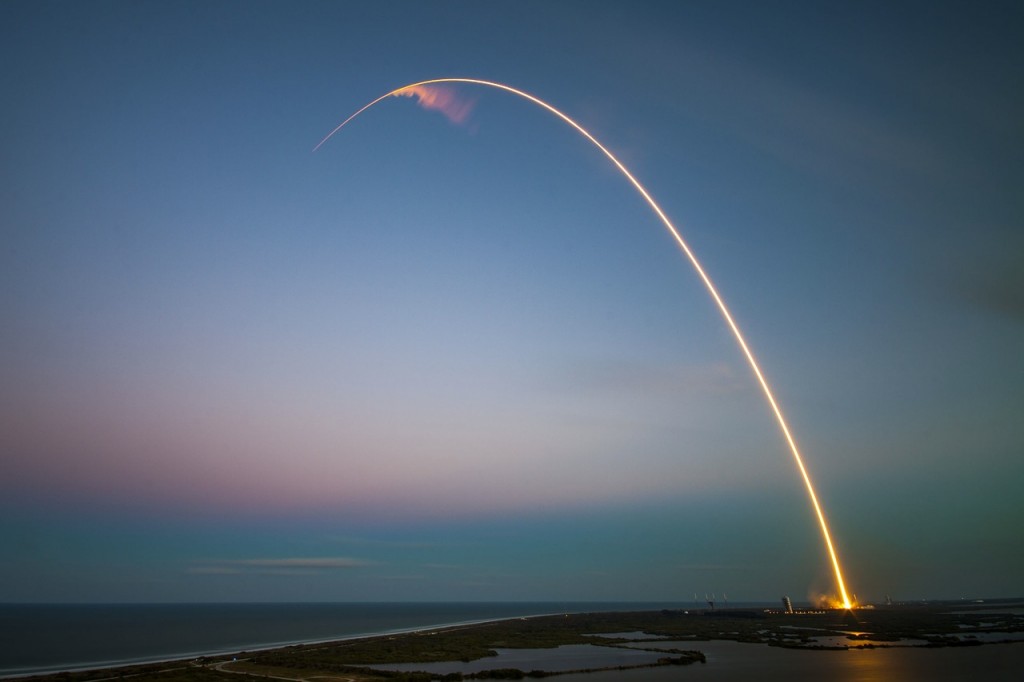 A look at Google’s trending topics by city reveals that the topic is not only being searched in the U.S, but also throughout the world in Europe, Africa, and Asia. Cities that are not knowing for their Bitcoin industry have made it to the list, which means that Bitcoin’s popularity keeps growing, even in places where it is not being widely used.

On the 22nd, Bitcoin even made it to the 6th place as the most popular search term in the U.S with more than 200,000 searches. Also in the top 20 is the search term “Ethereum,” reaching the eighteenth spot after news that the Enterprise Ethereum Alliance added 86 new members.

A look at the cities that are googling Bitcoin reveals a diverse list composed of:

Starting with Lagos, a city in the Nigerian state of Lagos, and the city that is currently showing more interest in Bitcoin than any other. Although Bitcoin isn’t as popular as it is in other countries, the first place in Google search trends is probably driven by the country’s need for a decentralized and deflationary currency.

Then there’s San Francisco along with a few other American cities, New York and Los Angeles. The United States of America is considered one of the most important countries in Bitcoin the USD making up a good portion of the global Bitcoin volume, second only to Japan. Citizens are currently awaiting the SEC decision regarding the review of the Bitcoin ETF. 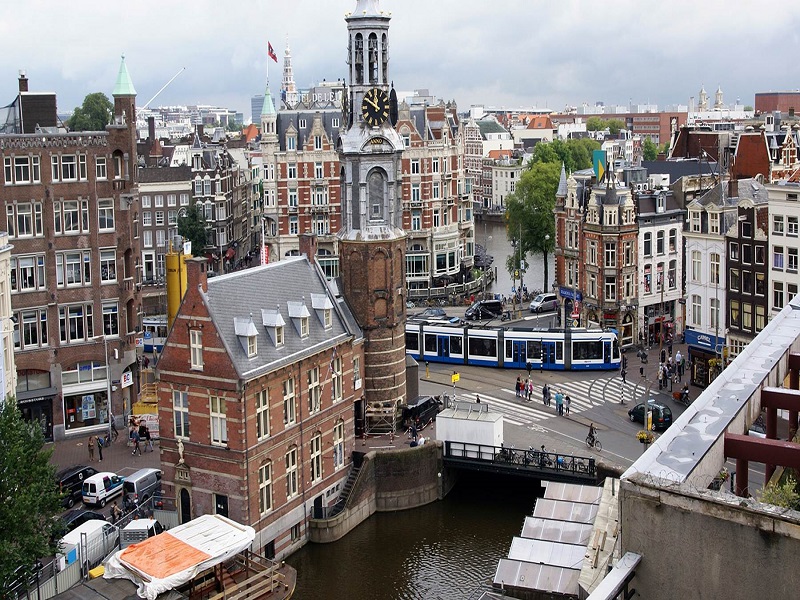 Then, we have two European cities, Amsterdam and Vienna. Europe is still a bit behind on Bitcoin as the sum of all European Union countries using EUR to interact with Bitcoin makes up for roughly 7% of the global Bitcoin volume.

We were suprised to find Toronto on this list, as the Canadian Dollar currently makes up less then 0.30% of the global Bitcoin volume. This, however, may change in time as Bitcoin continues to gain traction.

Lastly, we have Melbourne and Sydney, two Australian cities that are searching for Bitcoin. Although the Australian Dollar makes for an even smaller percentage of the global trading volume, the most recent tax cut on Bitcoin’s double taxation problem may kickstart the Bitcoin industry in the country.

If you were surprised to not find any Japanese city on this list, you’re not alone. This can mean that there is still room for the coin to grow in Japan. It can also mean that Japanese citizens don’t feel the need to search for Bitcoin in google, as the coin is becoming a sort of national phenomena and is widely accessible offline.

However, it is also worth noting that although no Japanese city is on the top ten right now, Bitcoin was the 7th most googled term on the 22nd of May in Japan.

By now, everybody knows that Japan is the becoming a sort of “Bitcoin capital”. The country recently passed a law in which Bitcoin is recognized as a legal method of payment, made the sale of Bitcoin exempt from the consumption tax and basically gave it the big government seal of approval.

Japan’s Peach airlines made news this week for accepting Bitcoin for its flight bookings is just the latest example of Bitcoin sweeping the country by storm. 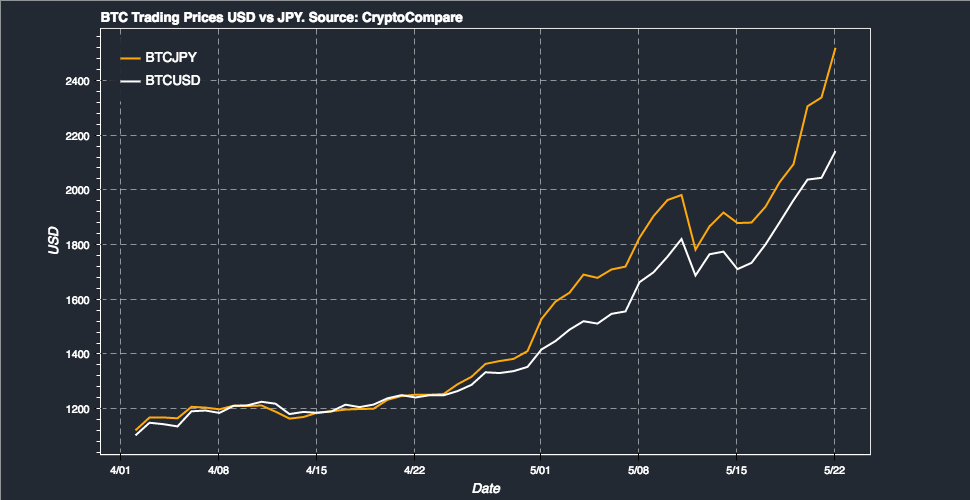 The JPY has also overtaken the USD and CNY in terms of trading volume. This overwhelming demand for Bitcoin in the country has even caused Bitcoin to trade at considerable premiums, with Bitcoin being bought and sold today on Japanese exchanges.

It truly seems that Bitcoin is coming closer to the mainstream stage in part due to the Japanese government’s permissive stance on its legislation and, as Google shows, there is still room for the currency to grow both in Japan and throughout the world.

Is Bitcoin truly becoming mainstream? Can we continue to grow so rapidly without fixing our scaling issues first?