Welcome back, book lovers! As we continue our exploration of Saifedean Ammous’ “The Bitcoin Standard,” it’s time to turn our heads to previous forms of money. Each of these stories carries a lesson. At least one serves as a metaphor for the state of our current monetary system. They’re all fascinating, you’re in for a treat.

But before we get into the meat and potatoes…

Back to The Standard, let’s start with “Chapter 2: Primitive Moneys.”

The Rai stones Of Yap Island

According to Wikipedia, Yap is composed of four islands, “separated by relatively narrow water features, and the islands are surrounded by a common coral reef. ” Currently, they’re part of the Federated States of Micronesia. The islands are a desired scuba destination and are famous for the Rai stones. Their story inspired the novel “His Majesty O’Keefe,” and a posterior movie starring Burt Lancaster.

What are the Rai stones, though?

The Rai stones that constituted money were of various sizes, rising to large circular disks with a hole in the middle that weighed up to four metric tons. They were not native to Yap, which did not contain any limestone, and all of Yap’s stones were brought in from neighboring Palau or Guam.

To quarry and then transport the stones required real effort, months, and hundreds of men for the bigger ones. Once a Rai stone arrived to Yap, it was displayed for everyone to see. If and when the owner decided to buy something with it, they would just announce to the crowd who the new owner was. Transfer of value completed, he or she could do the same. That’s it. That was the system they used, “For centuries, and possibly even millennia.”

So, the stones were difficult to produce, they were “hard money.” They were salable and, once in place, didn’t need transportation and could be used all over the island. They were also divisible, the townsfolk figured out a way to buy and sell fractions of a Rai stone.

In other words, Rai stones had a very high stock-to-flow ratio, and no matter how desirable they were, it was not easy for anyone to inflate the supply of stones by bringing in new rocks.

A Stranger With Money Arrives

This is where it gets interesting. An “Irish-American captain by the name of David O’Keefe was shipwrecked on the shores of Yap.” The sailor saw a business opportunity. He wanted to sell the island coconuts to coconut oil producers, but the islanders were not interested in helping him. O’Keefe sailed to Hong Kong, got a large boat and modern tools, went to Palau, got Rai stones, and sailed back to Yap.

Contrary to what O’Keefe expected, the villagers were not keen on receiving his stones, and the village chief banned his townsfolk from working for the stones, decreeing that O’Keefe’s stones were not of value, because they were gathered too easily.

Of course, some of the islanders disagreed and did business with the sailor. That brought conflict to Yap and, long story short, the Rai stones ended up losing their usefulness as money. Another explanation:

With modern technology, the stock-to‐flow ratio for Rai stones decreased drastically: it was possible to produce far more of these stones every year, significantly devaluing the island’s existing stock. 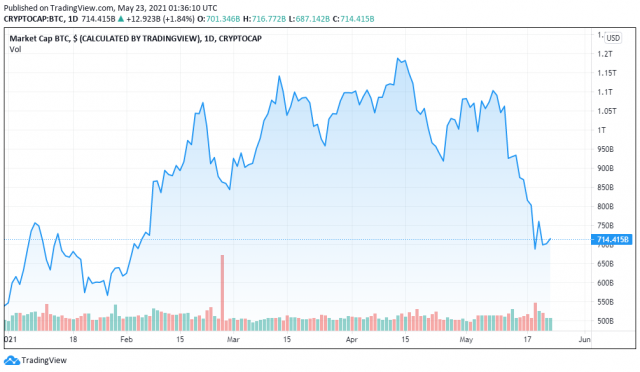 The Aggry Beads Of Western Africa

It’s not clear where these beads came from, but they were considered valuable in that region.

Glassmaking technology was expensive and not very common, giving them a high stock-to‐flow ratio, making them salable across time. Being small and valuable, these beads were salable across scale, because they could be combined into chains, necklaces, or bracelets.

In Europe, glassmaking technology was common. When European explorers got to the region and saw their economic system, they brought glass beads and slowly flooded the market. This turned the beads from “hard money” to “easy money.” The process eroded the Western African’s buying power and slowly transferred their wealth to the Europeans.

The aggry beads later came to be known as slave beads for the role they played in fueling the slave trade of Africans to Europeans and North Americans.

In current words, the glass beads are inflation and we’re the slaves.

Related Reading | How Bitcoin Could Surge 500% Amid Rising Institutional Adoption

Seashells were used as a medium of exchange all around the world. The harder to find were more valuable because they were scarcer. They had a problem, though. Since the seashells were not uniform units, prices couldn’t be easily expressed in them. So, “As technology advanced, particularly with metallurgy, humans developed superior forms of money to these artifacts, which began to quickly replace them.”

When metal coins arrived in North America, they substituted whichever form of money the region had. They were easy to transport and uniform, so prizes could be expressed in them. And the coins were increasingly accepted everywhere.

New technologies and the use of “hydrocarbon fuel energy,” made “artifact money” obsolete because it made everything easier to produce.

As soon as these monies lost their hardness, their holders suffered significant wealth expropriation and the entire fabric of their society fell apart as a result.

Is Saifedean Ammous insinuating that’s what’s happening to our current society? Probably not.