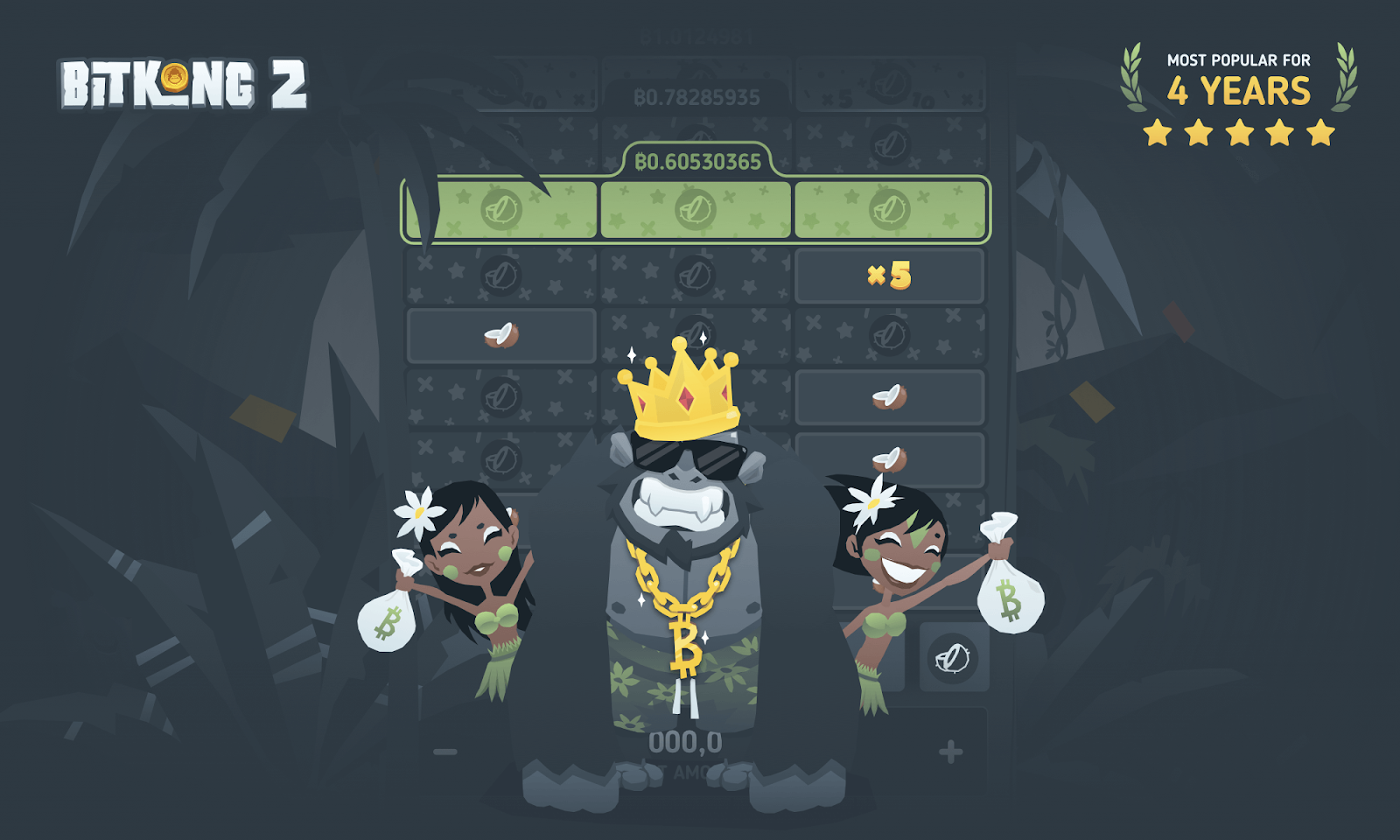 BitKong is a cryptocurrency casino that is free to play, and impossible not to love. This game supports a wide range of cryptocurrencies on their website and Android app and even provides users with the ability to play for free as they get the hang of the interface.

The look of BitKong immediately strikes you as professional—the graphics are fun and appealing, and the different gameplay modes make it evident that a great deal of thought has gone into this cryptocurrency casino.

You have three options to begin playing on BitKong: deposit BTC or another cryptocurrency; use the “for fun” mode which allows you to basically test the game for free, or use the bitcoin faucet to earn some BTC and possibly win big without investing anything.

Each of these options works seamlessly, and everything has been highly optimized.

BitKong has great bones, which means that a lot of unnecessary flashes isn’t really missed. The BitKong platform offers two other dice games hosted by its sibling websites, and it uses a provably fair system for the sake of transparency. The “bonus options” section in BitKong is somewhat vague, so it’s difficult to make an early judgment call on this topic. 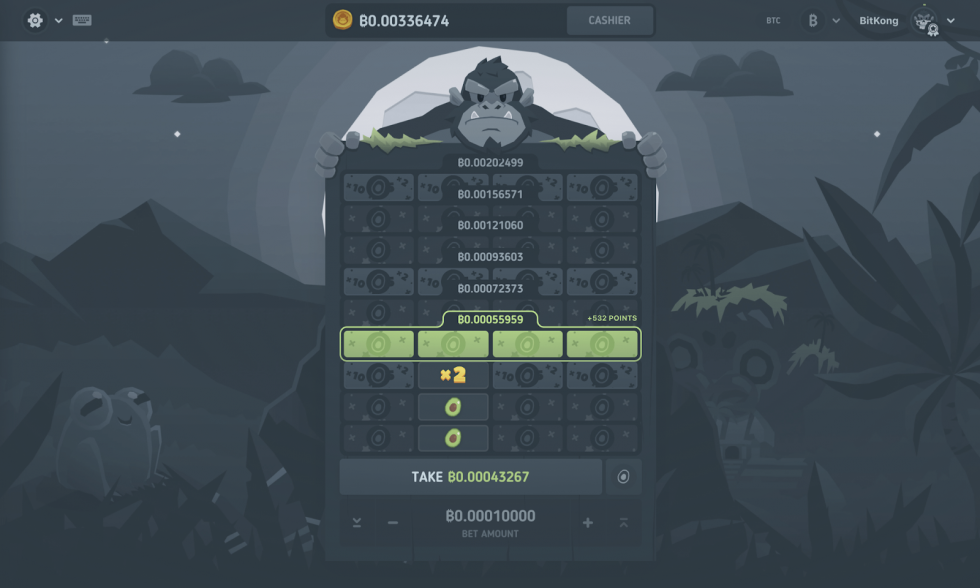 How The BitKong Game Is Played

When you begin a BitKong game, you will see four columns and nine rows; within each row, you’ll have four options. One of those four options will cause you to lose automatically, and the other three will allow you to move on to the next row—each successive row features bigger rewards. You can cash out anytime throughout the levels, but obviously, the longer you hold out, the more you can win.

BitKong levels transition in this order: Easy, Medium, Hard, Extreme, and Nightmare. In the Nightmare Level, just one option out of four allows you to pass on to the next row, but this obviously means that the payout is higher. For the Easy level, the payout is 1.29x, Medium is 1.45x, Hard is 1.94x, Extreme is 2.88x, and Nightmare is 3.8x. Some levels feature the chance to get a random multiplier, which allows you to drive up winnings further.

The minimum bet on BitKong is 10 satoshi, but you can bet up to 1 whole bitcoin if you’re feeling lucky. 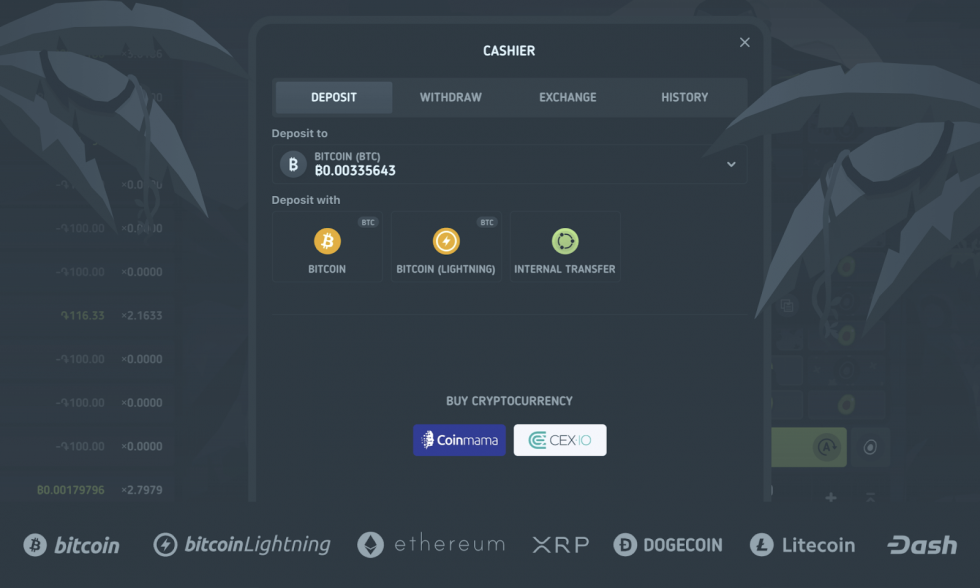 Deposits and Withdrawals on BitKong

BitKong allows deposits from Native Segwit and Legacy addresses, and they even support lightning network deposits; lightning has just a 1000 satoshi minimum deposit.

As is standard in the industry, BitKong charges a 0.0001 BTC fee for withdrawing, but you can speed up the transaction by paying 0.0005 bitcoin instead if you need your funds immediately. For the sake of simplicity, you can also exchange your bitcoin for other cryptocurrencies inside the BitKong casino.

BitKong offers an immense number of extra rewards and potential bonuses to players. Their provably fair jackpot offers the chance to win big if all the first seven signs of your bet’s hash read seven (so it should look like 77 77 77 7).

The jackpot can get absolutely massive depending on players’ bets. The chances of winning the jackpot are slim to be sure (1 in 268 million, or somewhere in that ballpark), but that’s the way it goes when you’re volleying for a top prize.

BitKong also offers daily, weekly, and monthly leaderboard rewards. Players with the highest points in a given period can receive prizes. BitKong’s Ranking also provides cashback (up to 0.3%) to players with the “King” rank. Lower rank players still earn 0.1% back.

Another bonus reward BitKong features are magic chests. These are, again, based on points. Players who receive magic chests are rewarded with a random amount of credits once they unlock them. The reward in the “Black” magic chest goes up to $10,000.

Another huge perk of engaging with the BitKong platform is the opportunity to compete in tournaments. These tournaments give players another chance to win big–one of the BitKong tournaments is structured so that the first place winner receives 30%; second place gets 15% of the bets; third place takes 5%, and the additional money is split amongst the rest of the players.

This is just one example of the tournaments that BitKong offers, so betters who are interested in progressive bonuses and other tournament structures will be pleased with this one.

To keep your information and funds protected, BitKong lets you utilize standard two-factor authenticator, but they obviously take security very seriously because they also allow something called “Security Keys”–which aren’t commonly seen in cryptocurrency casinos. They basically give you the option to use more secure solutions such as Trezor, Ledger, MacBook Pro Touch ID, and any other FIDO2 compatible hardware through BitKong. Additionally, you can enable Telegram and Line authenticators for even more peace of mind.

Instead of providing an endless selection of games to choose from, BitKong has opted to do just a few things very well. BitKong offers a simple yet innovative cryptocurrency betting game, equipped with tons of exciting extras and dynamic graphics. The designs on the BitKong platform are so strong that you’ll enjoy looking at this game, even if you aren’t winning money, and you never have to worry about fairness or security thanks to all of the extra efforts BitKong has taken.

Overall, BitKong is an incredibly strong cryptocurrency casino that is bound to delight passive betters and competitive players alike.