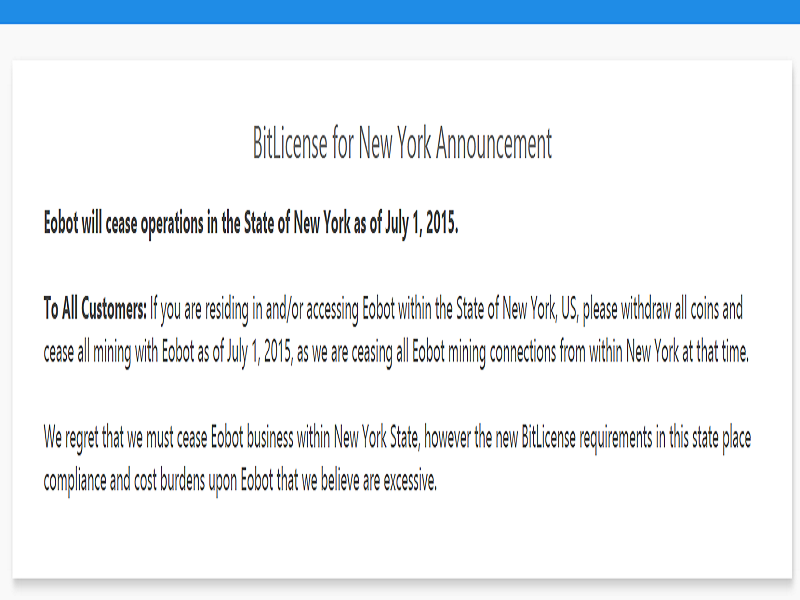 The highly restrictive and controversial New York BitLicense has claimed another victim. Eobot, a Bitcoin cloud mining company, will be ceasing operations in New York state as of July 1, 2015.

Eobot has made the decision to cut off its services to New York because it believes the BitLicense requirements are “excessive”:

“To All Customers: If you are residing in and/or accessing Eobot within the State of New York, US, please withdraw all coins and cease all mining with Eobot as of July 1, 2015, as we are ceasing all Eobot mining connections from within New York at that time. We regret that we must cease Eobot business within New York State, however the new BitLicense requirements in this state place compliance and cost burdens upon Eobot that we believe are excessive.”

This announcement comes just a few days after BTCGuild, another Bitcoin cloud mining company, announced that it would be shutting down completely because of BitLicense. BTCGuild worried that the regulation’s “gray areas” were vague enough to bring the company under the New York Department of Financial Service’s (NYDFS) jurisdiction, which would put the company at risk. BTCGuild cited other reasons for shutting down, such as falling mining profitability and an increasing risk of being attacked by competitors.

ShapeShift, a popular cryptocurrency exchange, recently cut its services to New York as well, citing an unwillingness to comply with BitLicense. Erik Voorhees, ShapeShift’s CEO and a well-respected member of the Bitcoin community, said that his company was not willing to diminish his customers’ privacy for the sake of complying with BitLicense.

Many people in the Bitcoin community have opposed BitLicense from the beginning for this very reason — they worry that the bill is so restrictive that many Bitcoin companies will not have the resources to become compliant with the law. Additionally, the reach of this law is massive; companies must comply with BitLicense if they do any business in the state of New York, regardless of where the company is actually located.

Do you think companies will continue to shut down or end services in New York because of BitLicense? Let us know in the comments below!