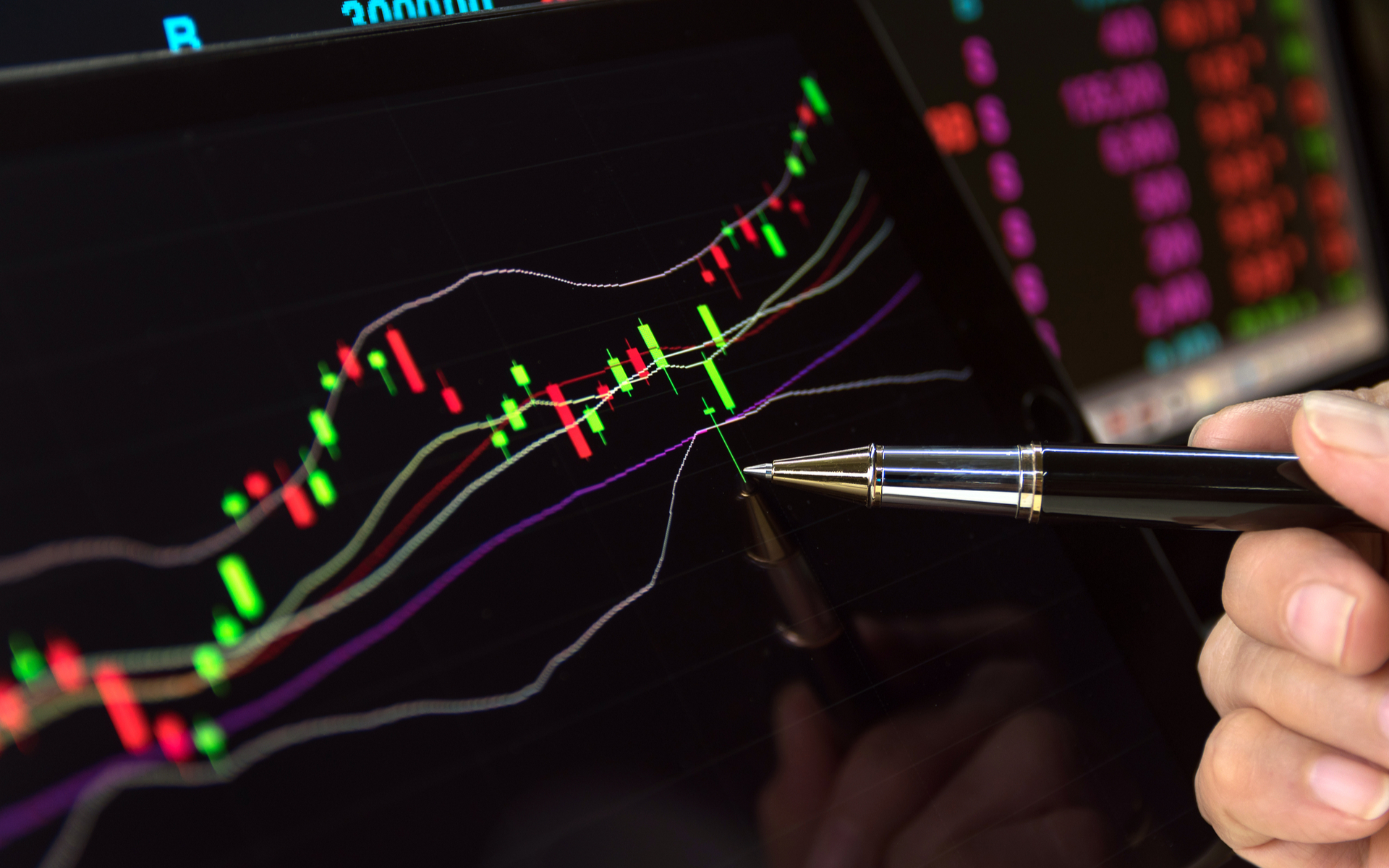 Bybit VS BitMEX: A No-Frills Comparison for Crypto Derivatives Traders

BitMEX, founded in 2014 is a peer-to-peer trading platform for cryptocurrency products. BitMEX and the BMEX mobile apps are owned and operated by a Seychelles incorporated entity called HDR Global Trading Limited.  BitMEX’s founding team is made of three individuals with experience in equities derivatives trading, web development, and market-making.

Bybit, established in 2018 is a cryptocurrency derivative trading platform registered in the British Virgin Islands. It has its headquarters in Singapore and it also operates out of Hong Kong and Taiwan. Bybit has individual clients and retail from all over the world including North America, Europe, Russia, Japan, South Korea, and Southeast Asia. In late June 2019, it revealed that it’s trading volume hit $1billion and $2billion USD on consecutive days.

Bybit was founded by Ben Zhou, an experienced quantitative and margin trading professional who believes that there were too many inefficient markets in crypto derivatives trading and he thinks that traders deserved a better exchange that really gave them what they needed. 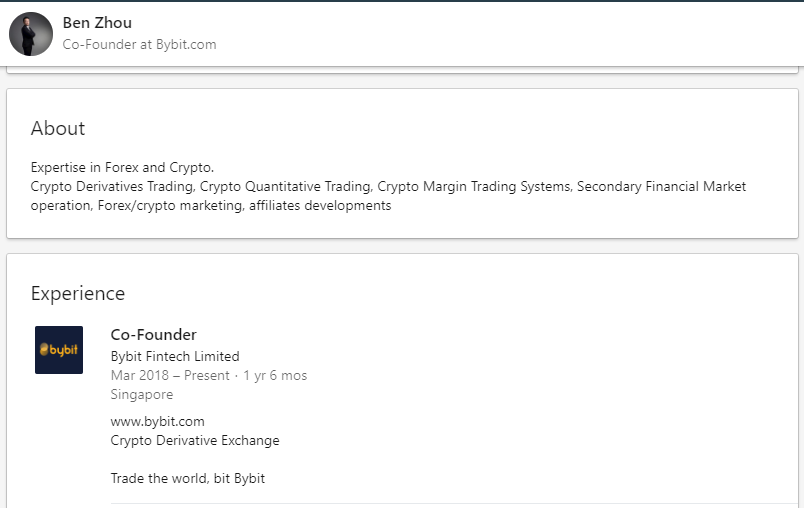 Both Bybit and BitMEX are created as platforms for trading cryptocurrency derivatives. A derivative is a trading instrument that derives its value from an underlying instrument. The most popular crypto derivatives are futures, options, and swaps. Derivatives trading is also bundled with leverage (also called margin) trading to provide traders with a multiplier effect on the value of the actual money they spent on a contract.

On BitMEX, traders buy “Long” or sell “Short” perpetual contacts as limit, market, or stock market orders. The UI is somewhat crowded, and beginners might be overwhelmed by the information overload and lack of guiding prompts and tips. However, BitMEX offers traders up to 100X leverage; hence, what you could argue that the high leverage makes up for the lack of a user-friendly interface.

On Bybit, you can trade perpetual contracts on BTC, ETH, EOS, and XRP. The exchange says it is already working on supporting derivative trading on a long list of other cryptocurrencies as well. ByBit also offers up to 100X leverage on its trades. The trading layout is user-friendly with compartmentalized panes for different information and actions. There’s a non-intrusive tutorial that provides navigation tips which could be very helpful to new users or beginner traders.

Bybit is also making a strategic move that eases new users and beginners into its platform with a bonus policy that helps new users to try the platform with no risk for the first time. After creating an account, following Bybit on Twitter, will earn you $10 welcome bonus. You’ll get an additional $50 bonus after your initial deposit. The $60 bonus can then be used to test the market until you are comfortable with risking your money in a trade.

Fees could potentially eat into your profit or widen your loss. BitMEX charges a negative – 0.0250% maker fee and a 0.0750% taker fee. A negative fee suggests that you will be given a rebate on the trade. BitMEX also charges its users long and short funding fees as seen in the chart below. 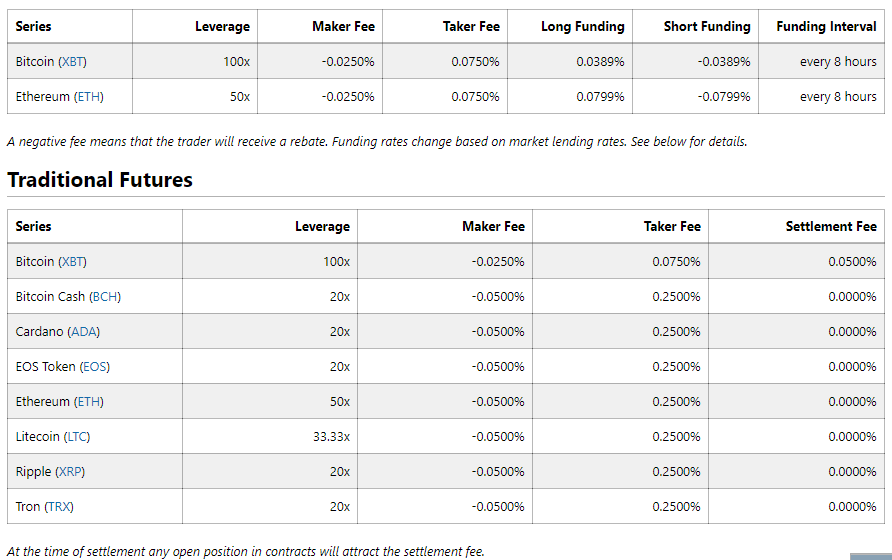 On Bybit, traders are charged a negative -0.0250% maker fee which suggests that the trader will earn a rebate for making a trade. Bybit also charges a 0.0750% taker fees which is the same amount charged on BitMEX. However, Bybit says it does not pay or receive any of the funding fees on its perpetual contracts. In addition, Bybit doesn’t charge any deposit or withdrawal fees.

BitMEX currently supports BTC, BCH, ADA, EOS, ETH, LTC, and XRP. The leverages that it offer on trades also vary for different cryptocurrencies. You should also note that only BTC deposits are accepted on BitMEX. You can’t deposit any other cryptocurrency. The exchange also records profits and losses in BTC terms; hence, withdrawals is only possible in BTC as part of what it calls ease of accounting.

In contrast, Bybit only provides supports for BTC, ETH, EOS, and XRP – it promises to add other coins in the coming months. Bybit charges a flat -0.0250% maker rebate and 0.0750% taker fees on all the coins its supports. The best part is that Bybit allows traders to make deposits and withdrawals in all the cryptocurrencies that it supports.

BitMEX customer support available via its website is primarily a web-based support ticketing system. It claims to provide support for the English, Chinese, Russian, Korean, and Japanese languages. In addition, it seems to have a chat-based support on third party instant messaging platforms such as Wechat, Weibo, and Telegram (Russian).

Bybit’s motto is “We listen, We care, We improve.” This motto is a core element in how Bybit’s customer support functions. It offers 24/7 customer service live chat right there on its website. In addition, users can reach out to support via email or reach out to one of its social media accounts on 8 of the biggest social media platforms in the world.

From the foregoing, BitMEX only takes the lead in for listing two more cryptocurrencies than Bybit However, Bybit has a cheaper and straightforward fee structure as opposed to BitMEX’ staggered fee structure. Bybit has 24/7 live chat which is better than opening a support ticket on BitMEX.

BitMEX might be older than Bybit but age is not necessarily a determiner of value. The verdict is that Bybit provides a superior trading experience.

However, Bybit is still relatively new in the market, we will be back after one year to see if its service has improved or deteriorated from current levels.

Disclaimer: This article is strictly for educational purposes and should not be construed as financial advice.