Coinapult announced that they have had their hot bitcoin wallet compromised.   The amount of BTC they said is 150 coins.  The hack comes on the heels of their deal with Factom.  Bitcoinist covered the news on their deal.

From the article about their working with Factom. 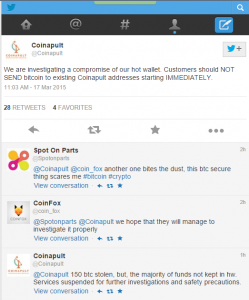 Coinapult CEO, Ira Miller, had the following to say:

Coinapult melds trustless, blockchain-based tokens like Bitcoin with familiar assets like US dollars. These are notoriously different and incompatible. Factom allows us to bridge the gap by digitally tagging and verifying centralized assets. Factom lets Locks act more like a cryptocurrency by limiting the trust required.It is always the right time for transparency. Now is just the first time this sort of thing is possible. Factom didn’t exist until recently, nor did other cool projects like tlsnotify. This really is the bleeding edge.

What this means for the Factom relationship we will find out and bring the information to you as we get it.  Coinapult posted the following information on their website and twitter about the hack.  Coinapult has suspended services while they investigate the hack.

Coinapult is investigating a compromise of its hot wallet.

Coinapult has stopped services during investigation. Withdrawals are currently disabled. It appears 150 bitcoins were stolen. The majority of funds were not in the hot wallet.

Updates will be provided as they become available.

Coinapult markets itself as a way to secure your bitcoins against market volatility and the ability to keep them secure.  More and more hacks are happening in the Bitcoin and Cryptocurrency industry ranging from exchange hacks to DDoS attacks against mining pools for ransoms. Despite lots of services like BitGo and others many companies and individuals are being caught by surprise by hacks.  Recent security holes in tools like Authy have made securing Bitcoin related services even more vulnerable.  Bitcoin being an all digital currency makes it a tempting target.

Bter suffering yet again another hack along with BitStamp and other it has been a busy 2015 for companies fending off and recovering from hacks if they are able.  Hopefully companies will take closer looks at services like BitGo and others offer to secure their systems.  Always remember with Bitcoin and other Cryptocurrencies you are your own bank.  Keep your coins secure and if you for some reason trust others with your coins be aware hackers are lurking and are actively hacking to get get into every service or exchange.

What do you think about the Coinapult attack?