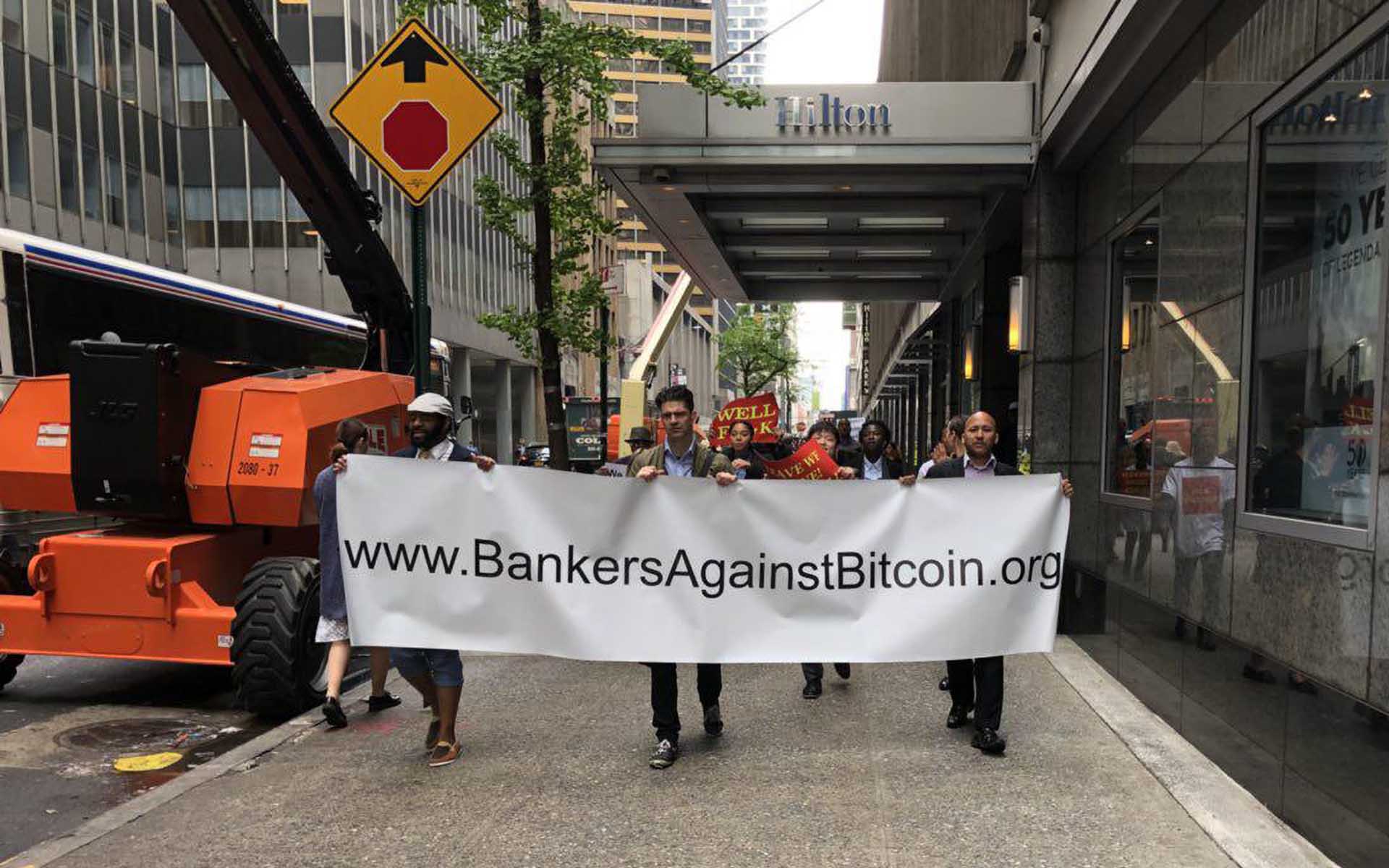 The 2018 Consensus Conference is underway in New York. Already, this year’s event seems to be even more colorful than previous with protesters staging a march outside the summit venue. The turnout so far is impressive with the usual logistical issues that are common in large gatherings such these.

While experts and crypto enthusiasts are engaging in the conference outside, some bizarre scenes are taking place outside. Scores of protesters bearing placards and banners are staging a “demonstration” on the streets. Alas, the individuals are part of the “Bankers Against Bitcoin” movement. Despite their name, these guys aren’t crypto critics. They are, in fact, trying to raise awareness of what the coming blockchain dominant future will look like. The demonstrators hold aloft signs with inscriptions like “we thought this was a bubble” and “free Jamie Dimon.” Some chant hilarious marching songs like “Hey, hey, Ho, ho. Blockchain has got to go.” According to the manifesto on the group’s website:

This protest is representative of what will happen to those industries and companies that fail to understand times have changed. Legacy industries that have gone unchallenged for decades will soon begin to see their monopoly slip away. The consumer abuse that’s been possible due to a lack of competition is over. The biggest competitor big banks have ever faced has arrived, and it’s not a company or organization, it’s a decentralized technology.

“Hey, hey. Ho, ho. Blockchain has got to go,” protesters outside Consensus. pic.twitter.com/WRKKIZVkcj

This isn’t the first time the group has taken the mainstream sector to task for its constant bashing of bitcoin and the crypto space. During the Miami Bitcoin conference, the movement published a scathing criticism of Jamie Dimon. Wall Street naysayers aren’t the only targets of the group as they have also come down hard on FUD-mongering journalists who are in the habit of writing “bitcoin obituaries.”

Major Highlights of Consensus 2018 so Far

Early reports on social media monitors of the conference indicate a high turnout. One of the highlights of the summit so far has been Fred Smith’s comments on Blockchain. The billionaire FedEx chairman said:

Blockchain has the ability to completely change logistics as we know it.

James Bullard, on the other hand, took a dim view to cryptos. The President of the St. Louis Federal Reserve said:

Cryptocurrencies might be pushing in the wrong direction in solving an important issue.

Bullard argued that cryptos being non-uniform currencies might be anathema to society. Thus, cryptocurrencies may work in a global environment but not as discrete national currencies. He also said the dollar would remain the de facto global world currency unless the bankers “screw up” but that both public and private currencies can co-exist as part of an equilibrium.

The 2018 Consensus Conference takes continues through Tuesday 15 and Wednesday 16, May 2018.

Will “occupy blockchain-themed” protests from mainstream finance become a thing in the future? Let us know in the comment section below.