The NFL is approaching crypto sports deals with caution, but the abundance of potential revenue is keeping the league engaged. Meanwhile, one storied football club across the pond is looking to build the first-ever ‘metaverse stadium.’ And a popular NBA player is shutting down shop on his NFT project, leaving many with a bad taste in their mouth.

It’s all in a week’s worth of action when it comes to sports and crypto. Let’s review the past seven days of activity.

De’Aaron Fox is arguably the most talented player on the admittedly lowly Sacramento Kings, and has been a long-time fan favorite for the Bay Area-adjacent club. Fox was one of the first NBA players to release their own NFT projects, titled SwipaTheFox, and despite roughly $1.5M in NFT sales, it’s all coming to a screeching halt this past week.

It’s another NFT project to join a long list of celebrity-started or sponsored mints that provided a detailed roadmap, but failed to deliver. Below is a screenshot from the project’s Discord that shows Fox’s announcement of discontinuing the project: 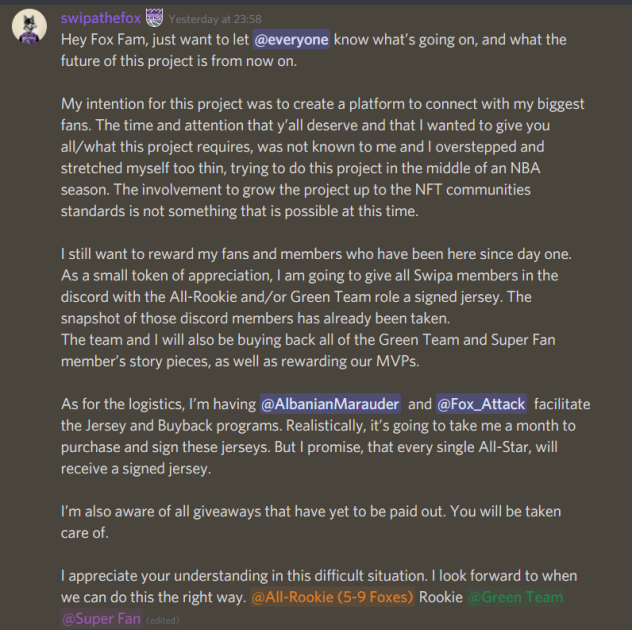 A new report from Front Office Sports has unveiled that crypto exchange FTX is launching a dedicated gaming unit focused on blockchain network and NFT integration. The full scope of the unit is yet to be disclosed, however the move is certainly on par with FTX’s positioning. The exchange has partnered with powerhouse esports org TSM in a first-ever naming rights deal, and has spent substantial funds around GameFi and related areas.

Meanwhile, the exchange also brought on a new head of global luxury partnerships as FTX looks to build outside of it’s current sports-sponsorship heavy strategy. Lauren Remington Platt will fill the role and has a resume tailored in fashion and business development that will be tough to top. Platt previously built her own beauty service and established premiere partners such as Saks Fifth Avenue and Vogue.

Nielsen Report: Blockchain Sports Sponsorship To Hit $5B By 2026

A new global sports sponsorship report from Nielsen that was released this week reveals that the analytics and data firm is projecting massive spend from crypto competitors to continue to flood in to the sports sponsorship space. Nielsen is forecasting sports sponsorship deals from blockchain players to amass to $5B by 2026, a nearly 8-fold increase over last year’s spend. The report cites ‘legitimacy’ and ‘fan engagement’ as the two key factors to contribute to future deal’s success in sport.

We’ll have a deep dive on the Nielsen report in the days to come.

MLS club DC United has found a new blockchain technology partner this week in XDC Network, who have signed a three-year deal and will find brand assets on United’s home and away jerseys and training tops.

“This partnership is about bringing the value of blockchain to the D.C. United fanbase to elevate their experience, drive deeper engagement, and connect the growing crypto ecosystem to the club.” 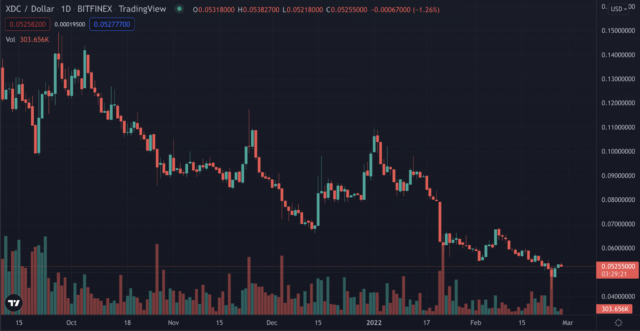 Last week’s Sports Slice highlighted the NFL’s latest lobbying efforts with the SEC and other U.S. federal agencies. This week, a new report from the Sports Business Journal states that the NFL is still proceeding with care; despite massive success in the Super Bowl commercial execution from crypto companies like Coinbase, the league isn’t ready to go all-in quite yet.

League representatives told SBJ that they are “hopeful” that a league-wide crypto policy can come into place in the next 30 days, admitting that it realistically “may or may not happen.” The league’s current hesitance lies within the lack of current regulatory framework, and SBJ reports that the league is “is more confident in products based on the blockchain that don’t require cryptocurrencies to function,” citing the deal with Ticketmaster to produce NFTs. In present day, the league is certainly more prone to revenue-driving opportunities that don’t require the league to take on the level of risk that current hands-on crypto engagement is exposing.

Manchester City has been one of the more aggressive Premier Club teams, and now the club is working with Sony’s VR team to build a “virtual duplicate of the Etihad Stadium” that will serve as the team’s virtual HQ. The club already has a fan token established with Chiliz, and despite rocky relationships at times with potential blockchain partners, it’s bullish to see Man City still pursuing new avenues to engage with fans.