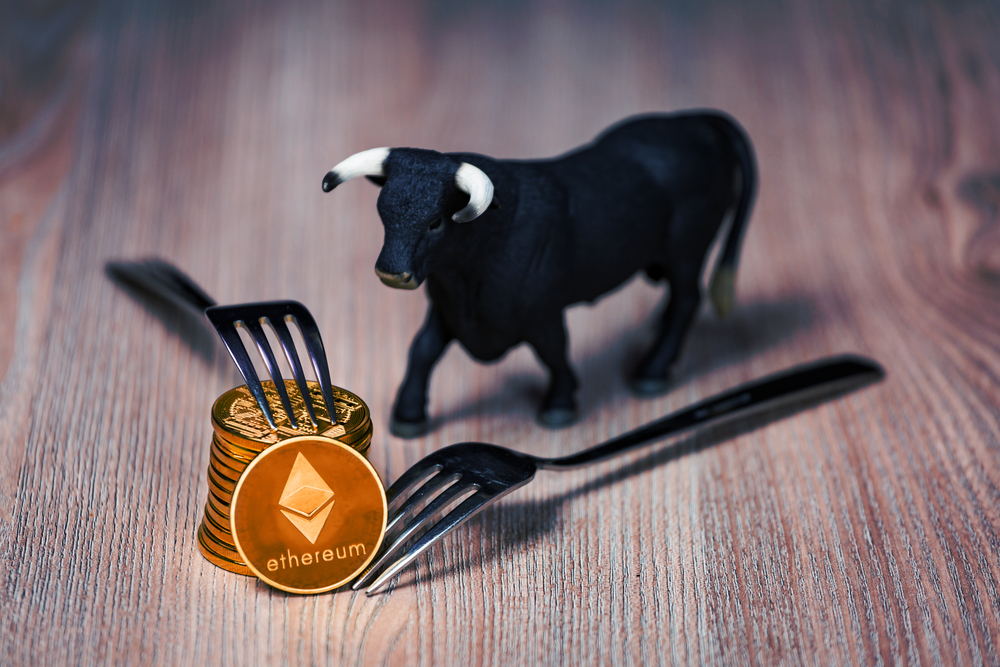 Ethereum prices rocketed back above $1,700 over the weekend, hitting a multi-week high after a major upgrade to the network was announced.

The Ethereum Improvement Proposal 1559 will be implemented as part of the planned  London hard fork coming this July for the network and will see a major shift in the way users transact.

Currently, users pay a gas fee to a miner for a transaction to be included in a block, which makes up a substantial part of miners’ overall income.

However, under the new proposals – which have gathered support from users and application creators – gas fees will be sent to the network instead of in a new fee structure called a “base fee”. Miners will only be given an optional tip by users, with the base fee set by an algorithm and thus easier for users to understand and check if they are paying a fair fee or not.

Ethereum and bitcoin prices have both bounced over the weekend amid the news and the latest expectations of further government stimulus. Ethereum climbed to a peak of $1,739  before pulling back marginally to trade around $1,683 this morning, while bitcoin also jumped to a multi-day high above $51,000 before settling just under $50,000 this morning.

The Mary hardfork was successfully completed on the Cardano mainnet last week, with tokens now being created on the Cardano blockchain. A big development, the update helped  ADA surge in price in recent months, with its valuation soaring some 900% since early  December to peak at $1.45 per coin.

While ADA has pulled back from its peak, it remains well above the $1 mark. The next milestone is the Alonzo hard fork which will bring smart contract functionality to Cardano. It should happen sometime in the second quarter, completing the overall Goguen upgrade.  This could really position Cardano as a rival to Ethereum over the coming years, especially as Ethereum is in the midst of transitioning to 2.0, and gas fees on the current blockchain continue to be a talking point.

Argo Blockchain, the UK-listed crypto asset mining firm, has started paying its CEO’s salary in bitcoin. It said that another staff was also being offered the bitcoin salary option, with monthly payments automatically converted from fiat currency to bitcoin at the daily market rate via the Satstreet exchange.

In February, Argo Blockchain mined 129 BTC, bringing in $6million in revenue. Whilst announcing its new payment options, it also told the market that the 4,500 mining rigs it leased from Celsius Network in February are all now operational, taking its bitcoin and other  SHA-256 crypto assets mining capacity to 1,075 petahashes.

Eco, a crypto asset startup created by the former co-founder of Uber has raised $26m in funding.

Garrett Camp, who helped start Uber, is one of the founders of Eco, which offers rewards on both crypto savings and spending at firms like Amazon and Uber.

The business claims to be building a new type of finance platform and has been supported by a number of businesses, including 16z Crypto – the digital asset investment arm of  Andreessen Horowitz – the Founders Fund, Activant Capital, Slow Ventures, Coinbase  Ventures, Tribe Capital, Valor Capital Group and others.

Eco says its platform is “not a bank, checking account, or credit card — we’re building  something better than all of those combined.”

Users will see cashback of up to 5% on spending and will earn 2.5%–5% annually with assets just sitting in their accounts, according to a post from the business. The top rate for savings is dependent on referrals to friends.

The Kings of Leon have released their new album in the form of an NFT – a non-fungible token. The first band ever to do so, they offered three types of tokens and thereby giving perks not available on more mainstream music platforms like Spotify or iTunes, in an attempt to improve artist/fan relationships.

NFTs are expected to increase in value over the coming years and are already proving lucrative, as seen by the artist Grimes selling $6m worth of art as NFTs recently.

The non-fungible token universe is seeing soaring demand for collectibles, with tokens such as CryptoPunks leading an explosion in bids for one-off digital images.

With a combination of art, technology, and social experimentation, the 10,000 unique collectibles have all been created and sold already. Other NFT’s are emerging across different sectors, with Jack Dorsey, CEO of Twitter, now selling the first-ever published tweet as an NFT.

Disclaimer: This is a marketing communication and should not be taken as investment advice, personal recommendation, or an offer of, or solicitation to buy or sell, any financial instruments. This material has been prepared without having regard to any particular investment objectives or financial situation and has not been prepared in accordance with the legal and regulatory requirements to promote independent research. Any references to past performance of a  financial instrument, index or a packaged investment product are not, and should not be taken as a reliable indicator of future results.

All contents within this report are for informational purposes only and do not constitute financial advice. eToro makes no representation and assumes no liability as to the accuracy or completeness of the content of this publication, which has been prepared to utilize publicly available information.

Crypto assets are volatile instruments that can fluctuate widely in a very short timeframe and therefore are not appropriate for all investors. Other than via CFDs, trading crypto assets is unregulated and therefore is not supervised by any EU regulatory framework. Your capital is at risk.