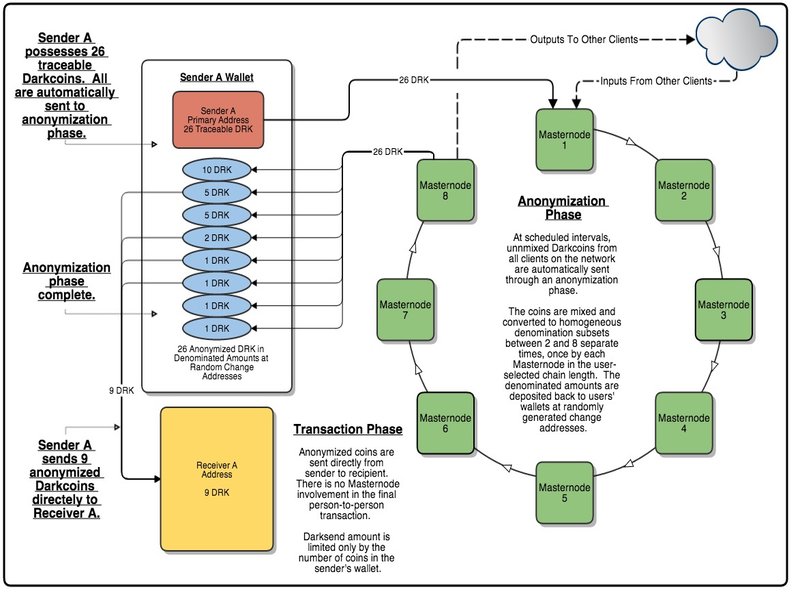 Darkcoin: Improving on all Stages

For those unfamiliar with Darkcoin, you better start researching on it as it had begun a new era of anonymous coins in cryptocurrency which is arguably the reason for which we see many anonymous coins these days.

Darkcoin was launched at the beginning of the year, and the constant updates it has been receiving may be a shock to many who do not believe in altcoins. Being one of the few coins that has shown long-term promise, Darkcoin is definitely a great contender for the future. An interesting feature that was introduced into the altcoin market by Evan Duffield, developer of Darkcoin, is that of masternodes. The use of these is as a foundation for DarkSend so that all transactions running through DarkSend have to be routed through these masternodes which can be hosted by Darkcoin holders with at least 1000 DRK.

One of the most important features introduced by Darkcoin which has become a standard in many altcoins released in today’s market is their X11 hashing algorithm. Arguably one of the most overused algorithms after its release, innovation is what counts, and this hashing algorithm was brought by Darkcoin, and for that, credit must be given. In an interview with Evan Duffield, when asked regarding the creation of the X11 Algorithm, the answer was:

All of this being mentioned, a new version of the Darkcoin wallet was released a couple days ago. The RC4 version of

the wallet brings many updates to the wallet itself, and many upgrades to the DarkSend platform as well. Updates to the main wallet screen and transaction are highlighted in this release other than many bug fixes that have been slowly taking place.

While many people have happily embraced this new version of the Darkcoin wallet, many have complained regarding bugs in the Darksend platform which seemed as a surprise to many, and this was addressed by Evan Duffield:

“From the looks of the thread all issues users are experiencing are not bugs at this point, just a misunderstanding of how Darksend works. All major bugs have been resolved and I’m going to move on to RC5 and other unique features of Darkcoin that we’ve had in the works for awhile”.

As it seems, most bugs have already been fixed and speculation regarding bugs in the DarkSend platform have just been misunderstandings regarding the way it actually works. However, there has been much talk on Darkcoin lately, and there have been concerns connected to the way the masternode network is handled. These questions have been answered but they must be clearly answered by the developers in order to eliminate any speculation. Darkcoin has certainly brought many things into the cryptocurrency world while keeping itself intact with constant updates. Yet, as with all coins, there will always be speculation regarding the coin, and whether its true or not, its something to ponder.