Earnabit: Get paid to answer questions! 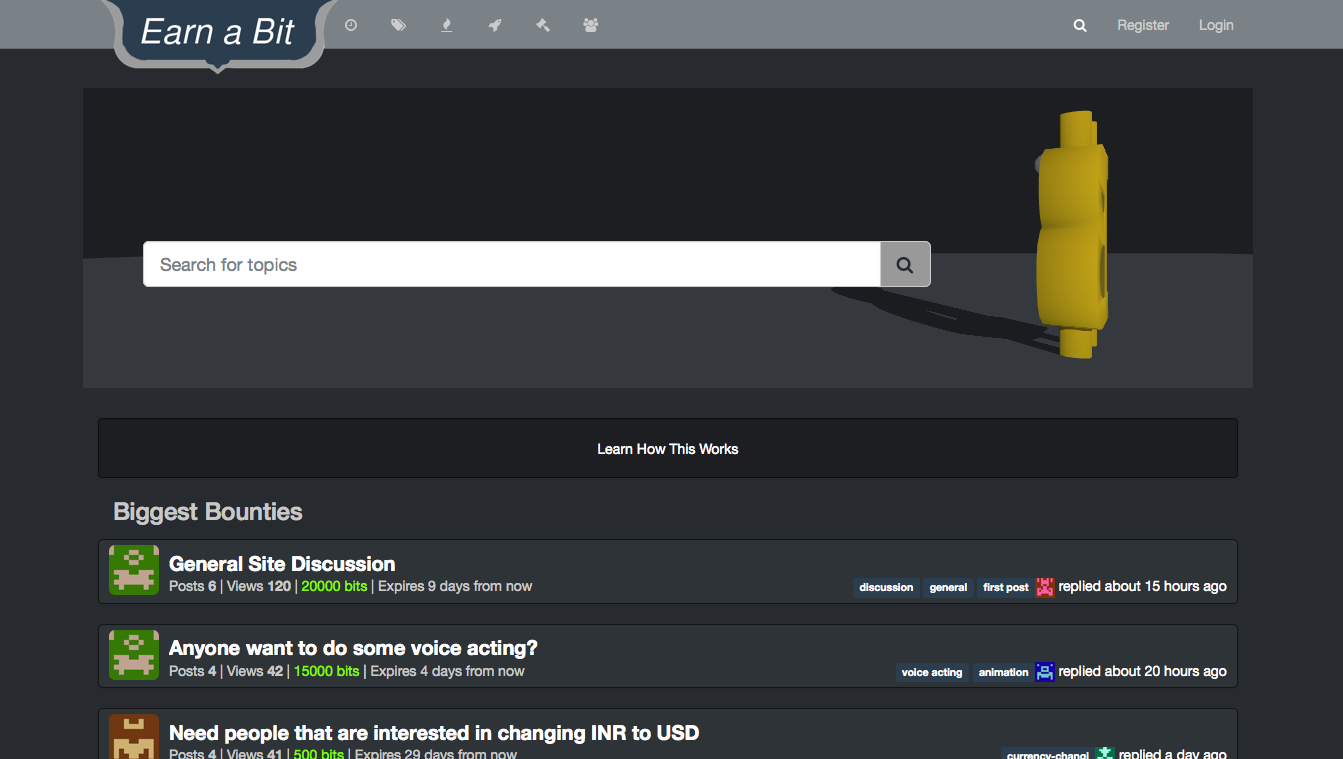 Earnabit: Get paid to answer questions!

Similiar to for example Yahoo Answers, but for actual bits instead of “points”. Another way Bitcoin ability for microtransactions opens up new business models and tipping. Today is the launch day of Earnabit as well, the first 300 users will get a 1000 bits on signing up as well!

1. What sparked the idea of Earnabit?

I noticed that a lot of very technical or very niche questions on sites like stackoverflow.com often get ignored. You really can’t expect someone to spend hours of their time helping a stranger for free if it will only benefit one or two people. That’s when I thought that it would be nice if users could post bounties along with their questions to give a greater incentive to the answerers.

It’s hard to say right now. I think it will either appeal to Bitcoin users asking serious technical/programming questions or maybe it will appeal to people who are just like forums in general. You could do a lot of fun stuff with it like posting a bounty for whoever has the best caption for a photo or maybe paying someone who does a little favor for you. For example, I put up a .02 Bitcoin bounty for someone with an Australian accent to read a few sentences that I might use in a video to explain my site. In the longer term, I hope it brings new people to use Bitcoin.

You need to sign up for an account. Then you have to look for posts that have active bounties. Chances are, if you leave a relevant, insightful post, the asker will probably award you with a share of the bounty.

This is my second e-commerce site and my third site that has Bitcoin integration so luckily I knew what I was getting myself into. I based it off of the NodeBB forum system which is an open source project that provides a beautiful, responsive forum. Adding my Bitcoin related modifications only took a few gruelling weeks to develop.

Currently, we are in an open beta. I feel pretty confident about my security model, but I’d hate more than anything to lose other people’s money so I want to warn users to only keep tiny amounts of Bitcoin on the site until the best of the best hackers have given up trying to hack the site. Once the security system becomes field tested and I review the code several more times, I’ll be more comfortable making the release official.

In the short term, I need to make a good video explaining how to use the website. I was able to get so many killer features into this release that for the foreseeable future I am just going to focus on small behind-the-scenes improvements.