On Monday, Easbit launched its final wallet version for Android smartphones! Easbit is a new company trying to lead the Bitcoin mobile applications industry. The company is introducing its newest app, a high level secured and “granny proof” Bitcoin wallet application exclusively designed for Android smartphones. The Easbit App’s only purpose is to provide users with a secure, user-friendly crypto-currency transaction platform for Android users while enabling them to send and receive secured transactions in the cryptocurrency Bitcoin.

The team is also interested in being available on all platforms, thus making it accessible to everyone, but for now the main goal is to reach and deliver the app to all Android users.

The company states that, according to EMarketer.com, the Android smartphone is already an essential part of everyday life for the majority of people around the world.  The mobile phone has evolved from being a simple communication device to an everyday use. Easbit sees the mobile payment market is a promising and potentially profitable market with an estimated transaction value of $721 billion by 2017, representing a growth rate of 33%. By 2017, it is estimated that 33% of the global population will have a smartphone, and the company feels that it is on the right track to become the take the leadership of this new market industry.

“Bitcoin has been able to steadily grow its market share and build a stronghold. We believe that it will only get better as more and more merchants are willing to accept the coin as payment for goods.”

The Easbit team has two co-founders whose backgrounds lay in the IT and marketing sectors — as well as banking. The company’s professional background forms its know-how in regards to how the traditional banking system works, as well as the potential role that digital currency can have in the future. 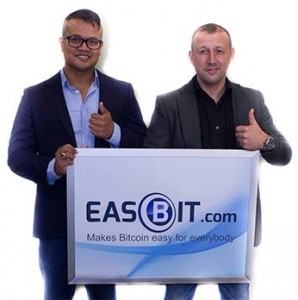 The Easbit team has been following Bitcoin since 2010, when it started to look at the growth of crypto-currency while being actively engaged in the creation of an app that would help Bitcoin achieve its potential. As the global financial crisis emerged, the team began thinking of ways to make Bitcoin more easily accessible to the average person; now, it seems their work is finally accomplished.

“We have been working on Easbit for over 1,5 years and now our new android app extends the Easbit platform to the mobile world freed by 3G networks from the constraints of Internet connections, our android app enables the secure transaction of Bitcoins on your mobile from anywhere. Encrypted scripts deliver all the security of the application, and judging from the overwhelming demand from the average person to integrate the mobile phone into their daily life, we believe this product to be a market changer.”

Easbit is determined to follow the true and decentralized nature of Bitcoin, and has implemented a system that doesn’t store users’ private keys or any related data on its servers. The company truly believes users should be in complete control of their money and therefore they have developed a system that stores private keys and users’ related information on their own Android devices. Each user connects to the system with unique user credentials that enable access to their wallet.

The company decided to focus its efforts on the Android operating system, as it is currently the most widely used platform.

EasBit will effectively deliver unprecedented, dedicated ease-of-use in order to differentiate its product from most of the Bitcoin wallets currently on the market. The team has seen an opening in the mobile phones market and strongly feels that there is a huge need for a far more user-friendly Bitcoin wallet, and firmly believes that they have taken the first major steps towards satisfying this need.

What do you think about EasBit? Let us know in the comments below!
Link to source