Ethereum is Gearing Up for a Massive Breakout; Here’s How High It May Surge

Ethereum has gained a strong foothold above $700, but it has been unable to extend its recent momentum. Each move into the mid-$700 region has resulted in it seeing relatively strong selloffs.

One trader is now noting that where the crypto trends in the mid-term will likely depend on whether or not bulls will confirm a few bullish technical formations that are currently in play.

He notes that a wave pattern combined with an ascending triangle indicates that a move up to $800 will likely take place in the days ahead.

Ethereum Holds Above $700 as Bitcoin Takes the Spotlight

As has been seen over the past few weeks, Bitcoin’s uptrend is once again occurring in isolation, with Ethereum and other major altcoins being unable to match the momentum seen by Bitcoin.

This trend has caused most altcoins, including ETH, to form relatively bearish charts for their BTC trading pairs, and it remains unclear as to when this trend will shift.

It will likely require BTC to see a prolonged consolidation phase, or potentially a sharp drawback resulting from investors rotating capital.

Trader: These Patterns Indicate ETH is Gearing Up for a Major Rally

One trader is still confident that Ethereum’s short-term outlook is bright, noting that there’s a strong possibility that a wave pattern and ascending triangle both allow it to surge towards $800 or higher.

“ETH feels like its gagging for a breakout any time now. Nice ascending triangle in an uptrend on the usd pair forming and we already had a strong 5 wave rise and now abc down on eth/btc. Ez scalp to 800 imo, long term much higher.” 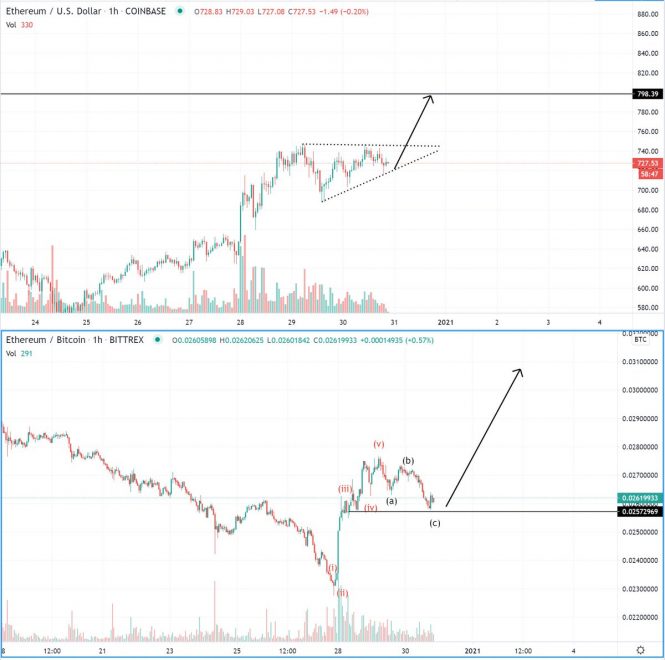 This upswing will need to occur in the next few days, or else both of the patterns he mentioned could be invalidated.