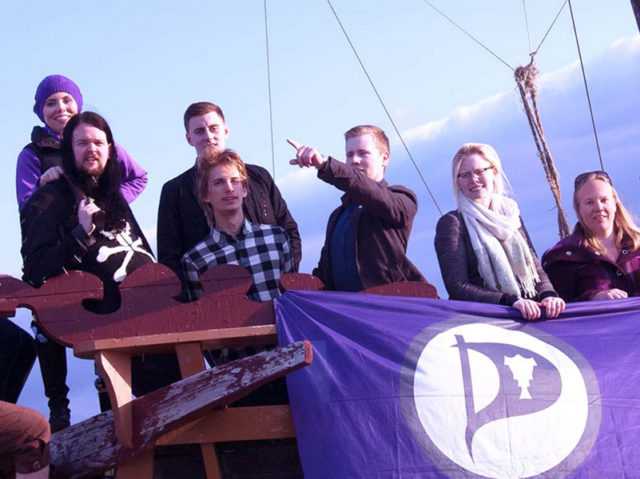 Iceland’s Pirate Party, part of a worldwide movement representing hackers, anarchists and Bitcoin enthusiasts, could possibly lead the country’s next government after Saturday. Current opinion polls have it ahead of any other party.

Although eight parties appear on the polling chart, under a parliamentary system it’s usually the largest party that has the opportunity to form a government first. Unlike the U.S. and U.K., it’s not winner-take-all. Iceland elects its parliament proportionally, meaning the legislature may look exactly like this pie chart soon.

Iceland: Few days before elections and the Icelandic Pirate Party (@PiratePartyIS) is in the LEAD! WOW! pic.twitter.com/uxJTDI3ynK

Iceland votes in an early election on October 29. All 63 seats in the national parliament, the Althing, are up for grabs and the winner needs 32 seats for a majority.

The election is happening six months ahead of schedule. They follow mass protests in April that saw prime minister Sigmundur Davíð Gunnlaugsson resign after becoming embroiled in the “Panama Papers” scandal.

Iceland’s Pirate Party bases its ideology on the original Swedish party of the same name. Many other countries also have local branches. The Swedish Pirate Party’s founder Richard Falkvinge is a well-known and fierce Bitcoin advocate.

While some proclaim Iceland’s party plans to make bitcoin an official national currency, this is probably too optimistic. The party does not mention bitcoin on its website, though there are a few cases of party officials speaking in Bitcoin’s favor.

However leader Birgitta Jónsdóttir, a prominent digital-rights activist, said she was inspired by fellow activist John Perry Barlow‘s wish to turn Iceland into “a Switzerland of bits“. This refers to a haven for all kinds of data, which no doubt includes Bitcoin on some level.

Previously a minor party, the Icelandic Pirate Party currently only has three seats in the national legislature. To go from there to a leading position in opinion polls suggests a volcanic shift in political sentiment.

2016 a Bad Year for Political Establishment

Perhaps this shift is happening worldwide, not just in Iceland.

So far, 2016 has been a bad year to be an Establishment politician. Financial scandals and economic disillusion saw formerly dominant political parties fall in important elections across the Western world.

While most eyes are on the upcoming U.S. election, Europe has already borne the anti-mainstream brunt most. Countries like Greece, Germany, Italy, the United Kingdom and Netherlands have all seen populist movements from across the political spectrum capture public attention — and votes.

Parties with long histories can no longer rely on majorities to hold their noses and vote for them come election day.

Like many countries, Iceland has a colorful history with its financial industry, and with Bitcoin. Previously a financial services center serving offshore customers in the U.K. and Europe, its banks and currency collapsed in 2008 as part of the Global Financial Crisis. Given that financial services controlled assets worth 10 times Iceland’s GDP at the time, this caused great economic and political upheaval. The people have maintained an often-hostile mistrust of bankers ever since.

Iceland’s Central Bank has previously stated that “to engage in foreign exchange trading with the electronic currency bitcoin” is prohibited. However to date there’s no record of anyone being arrested or punished for doing so.

On the contrary, Iceland is popular with Bitcoin mining facilities due to its frigid climate, which cuts cooling expenses.

Whether the Pirate Party wins government or not, it looks set to have a much more powerful voice in the future. Expect Bitcoin to at least be a major discussion topic there in the coming years.

Would you vote for the Pirate Party, whether it made any Bitcoin promises or not? Let’s hear your thoughts.