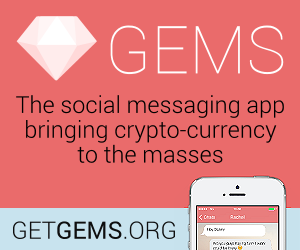 Over the past few weeks, there have been a lot of conversations in the world of cryptocurrency about the GEMS project. GEMS brings us the social messaging aspect we have all grown so accustomed to, and integrates it with the power of the blockchain, by offering GEMZ tokens. In order to gain user adoption, GEMS users will be able to contact people who use Telegram, or one of the third party applications built on top of Telegram.

GEMS is known for bringing social messaging and digital currency together. By offering a pre-sale of their GEMZ tokens on Koinify, they are not just raising the desired funds for future development of the platform, but they also try to attract potential advertisers for the social platform. Advertisements can be shown to users who opt in to seeing those kinds of advertisements, and the advertisers pay GEMZ to get their advertisements out to the public. Every time a user views one of these advertisements, they are paid in GEMZ.

As GEMS will be available for both iOS (currently in private beta) and Android (originally scheduled for Q2 2015), there has been a lot of interest in this project. By the looks of things, that Android release has now come a lot closer, as the GEMS development team, as they will be using Telegram’s Secure Open Source code. One of the main reasons for using this code is because it has all of the messaging features built in, and it allows communication with other Telegram users. 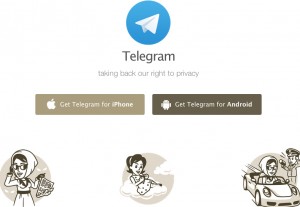 Telegram is a free-to-use social messaging application, which has seen a great adoption rate in The Netherlands, but is also available to other users around the world. As of this writing, there are over 50 million Telegram users worldwide. This is in big part because of the variety of operating systems Telegram can run on, whether it’s iOS, Android, Windows, Macintosh or Linux. Furthermore, there are both a web version and a Chrome app available as well.

Because of this move by the GEMS developers, their social messaging application will receive several security benefits. Secret chats is one of those examples, where users can set a timer before messages self destruct by using end-to-end encryption. Another benefit comes in the form of Group Chats, where up to 200 different users can have a conversation and/or share media and document files.

“The pace of Android development for GEMS was being questioned on the forums and we felt there was a gap that needed to be addressed. Momentum is important and we had to find a solution.Moving the GEMS Android app forward using Telegram is the best way for the GEMS team to help us all take back Social Media. All Android users should be very pleased.”

Have you used Telegram before? And if so, did you enjoy the exprience? Will it be beneficial to GEMS? Leave a comment below.