Bitcoin has been leading the market lower over the past couple of days, with Ethereum erasing the bulk of its recent gains as it slides towards $500, while BTC shows intense signs of weakness as bulls fail to defend $17,000.

This decline marks the first sustained pullback seen throughout the course of the recent multi-week uptrend.

Both BTC and ETH are still up significantly from their multi-month lows, but there now seems to be a greater risk of seeing even further downside.

One trader is noting that Ethereum needs to begin rallying higher and break above $570 to see further upside. He notes a break above this level could lead it to $800.

At the time of writing, Ethereum is trading down just over 2% at its current price of $510. This is around where it has been trading throughout the past few days.

The selling pressure seen over the past few days isn’t letting up, and Bitcoin’s break below $17,000 could create headwinds that force ETH lower in the near-term.

Analyst: ETH Could Rocket Towards $800 if One Key Level is Reclaimed

One trader explained in a recent tweet that a reclaim of $570 could open the gates for Ethereum to see a sustained move up towards $800. 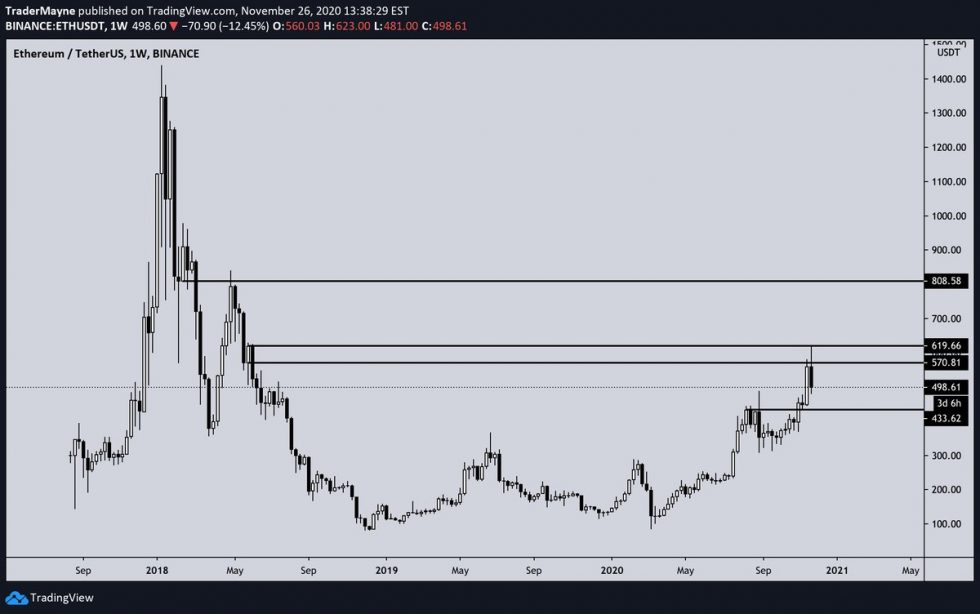 Although Ethereum could slide lower in the near-term – as mused by the analyst – the next strong upswing seen by the crypto could mark the start of a move towards $800.

This would allow the crypto to erase its trend of underperforming Bitcoin and potentially see significantly higher highs in the months ahead.