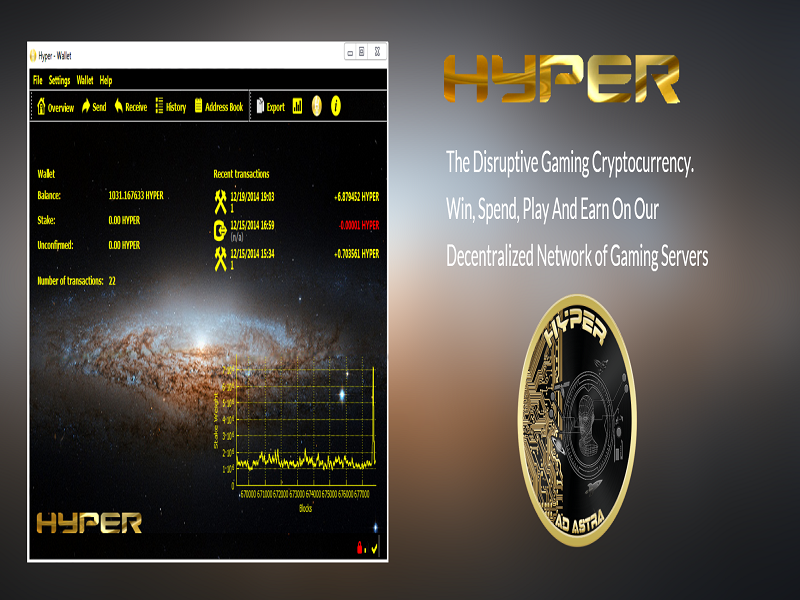 Recently, HYPER has been gaining a lot of momentum, as the gaming cryptocurrency has recently joined a couple of different projects, most of which are bound to play an important influence on the financial system, but also help the gaming industry thrive from all the points of view.

Disclaimer: This press release was provided by Bitcoin PR Buzz. Bitcoinist is not affiliated with HYPER or GoldPieces and is not responsible for their products and/or services.

For those who are not yet aware, HYPER represents a digital currency, meant for the gaming industry. Its main goal is to allow people to earn money, while playing games such as Counter Strike, while also strengthening the overall gaming ecosystem. Recently, the head of this digital currency has decided to sponsor a couple of different projects, while also getting involved in some. To further promote itself, the owner also got involved in a wide array of projects, including PICISI, Coin2 and more. Together with this, the company has started working on a worldwide crypto-gaming network, which is bound to revolutionize the gaming industry.

With these factors in mind, PICISI represents a digital currency crowdfunding project, which aims to change the way crypto-related projects are funded and become a reality. With this in mind, the platform was conceived to be a competitor to KickStarter, hence offering the same benefits given out by the crowdfunding platform, but many more as well, thanks to the fact that it can be operated with the help of a large number of different cryptocurrencies. If successful, PICISI will represent a great hub for financial support, but also of resources for developers from all around the world who would like to create anything from digital currency projects, to actual electronic devices and more.

Not only this, but HYPER now also has a twitch.tv livestream, where people can be tipped HYPER just for watching some of the live gaming action going on constantly, over on the HYPER CS:GO server. Together with this, gamers from all around the world will now be given the possibility to earn HYPER by playing a couple of more games apart from Counter-Strike, including Minecraft, on over 10 game servers, all of which support the popular gaming currency.

Recently, the currency has also gone ahead and integrated GoldPieces into their system, thus allowing players to earn this currency as well. Learn more about GoldPieces on bitcointalk. Other cryptocurrencies which would like to team up with HYPER, are welcome to contact the developers and learn more about this exciting project.

Based on everything that has been outlined so far, thanks to the fact that HYPER is now getting involved in some many projects, chances are that the digital currency will have a more important role over on the cryptocurrency market, and soon become one of the most powerful coins in its niche.

What do you personally think about HYPER and the latest developments? Let us know your thoughts.