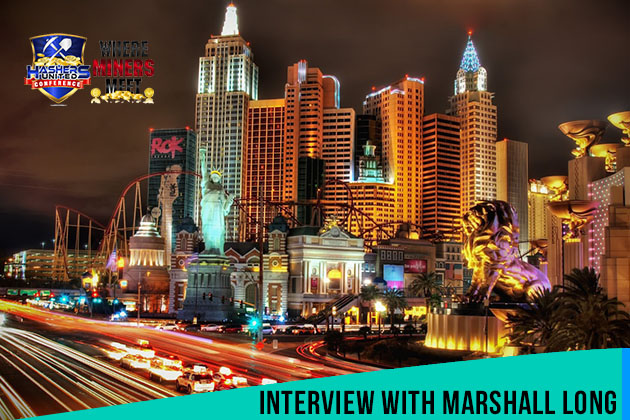 We were in the Crazy Sin City at one of the most exciting bitcoin conference of this year. Hashers United Bitcoin Mining Conference. We had a chance to talk to Marshall Long, executive director of Hashers.

Bitcoinist
-This is the first ever mining conference in the industry so congratulations guys for putting it together!
This is the second day of the two days conference here in Las Vegas. Amazing speakers, lot of audience. Excited to see a lot of new people. I have been to the Insidebitcoins conference beginning this weak and on the Coin Agenda as well, and I am really happy to see different people here.
We are talking about a pretty small industry, compared to the IT world and e-commerce world, but it was great to see all those new faces. Tell me a little bit about this!

How could you manage to throw a conference that has a completely different audience here in Las Vegas?

Marshall
– Yeah you know, the problem with a lot of conferences going on right now is just the same thing. Everybody is just talking about the same thing. We feel like the biggest underserved population in the crypto-community is miners. It’s just everybody is facilitating the VC-s, and you know, capital capital capital, with nobody talking about the miners.
Which everybody knows is the backbone. The backbone of, you know, the crypto-eco system.

Without the miners, you don’t really have anything. So it’s important that they get facilitated with, and you know it is also hard to find a place where you can get hands on and meet your peers.
Because most of the staff for miners is all online. So we thought it would be a good way to get that out and going. We do a lot of private customers and they wanna know more.
There’s not really a good place to get hands on and that’s why we thought.

Bitcoinist
– What do you see the direction of this conference, in terms of, you know with the problem of the power consumption of the mining equipment, the whole industry is turning towards the cloud mining and cloud services direction. Which will kind of be a disappointment for the end users that they won’t be able to set up their own home miner and mess around with it and over clock those machines at home. So we’re just gonna have huge
mining facilities, data centers and basically just online contracts. However, there is still going to be a niche market for script miners. Are you guys just going to target that?

Marshall
– Yes, so we are all under the belief that there is always going to be that group of people that just wanna get their hands on the new tech. It doesn’t have to be power efficient or any of that.
There is always gonna be a small group of people that wants to play around with new toys. I mean, why do technology people go to fairs and spend three hours walking around and don’t buy anything?
Because it’s a toy store, for you know, people who are technologically inclined. So there is that small group who will always have demand for new hardware. But there is also the factor what we call the “wife factor”.
Because when hardware gets in your house, we consulted you know a lot of newscrypt A6 centers, we brand them as the divorce makers. Cause while they are in your house, you have to sleep on the couch.
– But at least you don’t have to pay for heating.

– It will heat up your whole place.
But you know the problem with mining in Texas during the summer is, you tend to heat your house as well as heat your wife.

Bitcoinist
-Tell us a little bit about the next big conference. I heard there’s going to be something at the Philippines, is that right?

Marshall
– Yes, so we like the Philippines… we teamed up with Coin Agenda on this one. With the Bit Angels, Michael Turpin because we like to hit both sides, my team consists of tech people as well as investors people and attorneys and that kind of stuff. So we like to hit every market. So the Philippines is an interesting area. We’re gonna be doing one there in the next coming months as well as Hong Kong, London.

You know talking to Marco from Genesis, he thought it would be a good place to do Munich also. We may hit Munich towards the end of next year. Doing Octoberfest would be a fun thing for sure.

It’s a great idea to connect, there’s gonna be a lot of people there, it’s one of Europe’s biggest happenings in terms of festivals, so great idea with that.

Bitcoinist
– Please tell us a little bit about Hashers. I have seen a demo of the key chain, I found it amazing! It’s an amazing technology, with the mainstream of NFC mobile phones it’s just going to be helping the Botcoin storage as well as spending. Whose idea was that originally?
Please also tell us a little bit about the position on the market.

Marshall
– Sure! So the NFC card wallets how they came to be, it’s actually very interesting! My partner Leo, his brother was one of our very first customers way back in the day. And we gave him paper wallet to store his stuff on.
His brother’s name is Berentine. And one day Berentine came over to our RND lab in Houston, and said: Guys! What if this thing catches on fire? – Come on man! – No seriously, what if I drop it? What if I get it wet? – And we said,
well you could just put it in the safety deposit box right? And he said: well, why don’t you just make it out of metal? So, we went through a long phase of doing like actual cards made out of aluminium, or we hit it with a laser engraver and engraved the QR code and that stuff. And then, me and our business developer Godwin were sitting over lunch one day and said: man, Confucius had a real good idea, and the cool thing was we had our money transmitting license so we were not gonna have the same issue as Godwin was playing in, so we thought there would be a better way to do it, because QR codes on the back of coins kinda get you know, you’re still stuck at the same place of having something printed.

So we said let’s do it with NFC! We were able to embed an NFC chip inside the coin, that will hold private keys, public keys, whatever you want. So essentially you don’t have the same problems that plague paper wallets, such as disruptive happenings.

Bitcoinist
– What are the next goals? Selling those and getting those to the mainstream?

Marshall
– Yes, so our app team right now is really close to finalising the app that will make it little bit easier, cause the problem right now is that, you know, we like to appeal to the whole market. A technologically inclined miner doesn’t know what to exactly do with it. A casual miner or maybe a brand new miner won’t know what to do with it, necessarily. So we’re gonna be pushing out an app within the next couple of weeks. That will make it very easy to both put coin on that wallet, and also reprogram the wallet if you wanna put a private key on it, rip it off. So that, you know, people don’t have to buy a new one every time they spend it so. That’s gonna be in the works within the next couple of weeks and that will solve
the problems with it so.
Is it your goal to have it in everyone’s hand and use it for daily spendings or just to keep it as like a really really safe cold storage?

Marshall
– So that’s the nice thing anout NFC, it is really flexible. You know, NFC wasn’t really just developed for texting beds and stuff like that. You can send sms, you can do email, you can do contact transfers and that kind of stuff.
The chip inside of that can do all that kind of thing. Though it’s gonna be interesting to see what develops over the next few months and what customers really want. What the idea is.

So what our goal is, is for both. Some of our private customers, they actually physically put it in a bank, in their safety deposit box.
And they send all their payouts what we give them, essentially to the bank. And whenever they are ready to cash out they just go to the bank and pick it up. Now we also have a set of customers who use it to put their private key on it.

So they can take payments when they are on the go. You know they don’t have to take their phone or laptop with them, they just have this little coin or key chain. Someone says: hey! What’s your public key! I wanna send you some BTC!
And you just tap it on their phone and there you go!
– It’s a pretty nice way to keep your coins in a safety deposit box, and still receive payments whenever.

Bitconist
-It’s an amazing technology! Congratualations for you guys to put that product out on the market ! Congratulations for the conference as well! I had a great time here!