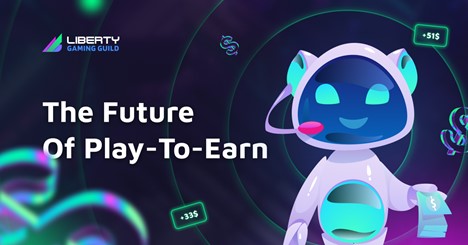 The cryptocurrency world welcomes new innovations every other day with an aim to connect the globe decentrally. After the quick rise of decentralized finance (DeFi) and Non-fungible tokens (NFTs) markets in the past year, the crypto community has once again turned its eyes to something new, play-2-earn (P2E) games, or GameFi as its popularly known. One of the most interesting aspects of this rapid globalization of communities is the economies that have grown out of them, how players place and create value on digital goods and services, and the ability for any player around the world to join.

Over the past month, seven of the top ten P2E games have a transaction volume of $100 million or more, Axie Infinity leading the pack with $1.1 billion in monthly volume. Despite the explosive growth of the GameFi industry, the fact is barriers to entry for the average gamer are exceedingly high. The cost of playing, geographical barriers, age of player, skill level, and other barriers could prevent a gamer from earning or playing.

Speaking in an interview, Nikolai Gurskyi, Founder of Liberty Gaming, a blockchain-based gateway for gamers to get easier access to NFTs, explained the challenges facing P2E gaming saying,

“P2E gaming faces a tough barrier to entry making it difficult for gamers to get access to NFTs, as they are normally not unlockable, or are simply too expensive for them to get,” he said. “Furthermore, players are finding it very difficult to get scholarships.”

With over 3.5 billion traditional gamers globally, the growth of NFT gaming and the GameFi industry seems to be only starting. As such, platforms such as Liberty Gaming aim to give existing and upcoming gamers easier access to NFTs and lower the cost barriers, allowing more gamers to start earning while playing. Launched in 2020, Liberty also seeks to teach and mentor these gamers, as well as provide them with a way to make earnings from playing games.

Notwithstanding, newcomers in the crypto gaming world normally invest in one or two games, which could pose a risk as an investment. This could see them earning less from playing low-rewarding games or investing in a game that doesn’t have a nice growth rate. In an effort to make it easier for people to invest in games, the game combines 7 popular P2E games – Axie Infinity, The Sandbox, League of Kingdoms, Star Atlas, Guild of Guardians, and Illuvium – creating a diversified pool under one token, LGG. This brings in more gamers to invest in P2E games by lowering associated costs, minimizing risks, and making them more accessible to the public.

As the GameFi industry grows, new gamers will require easy-to-use and cost-effective games to play. The P2E industry will move towards mainstream populations around the globe, boosting adoption rates and pushing GameFi towards a trillion-dollar market. By providing better tools, characters, gaming resources, and games, gamers are likely to earn more from the game and find more success. This welcomes more players which in turn grows the P2E gaming industry and the market.

Lastly, knocking down the barriers to access P2E games could help some gamers create a source of income. The industry creates a new dynamic to how gamers earn real money from playing games and performing other services in the gaming environment.