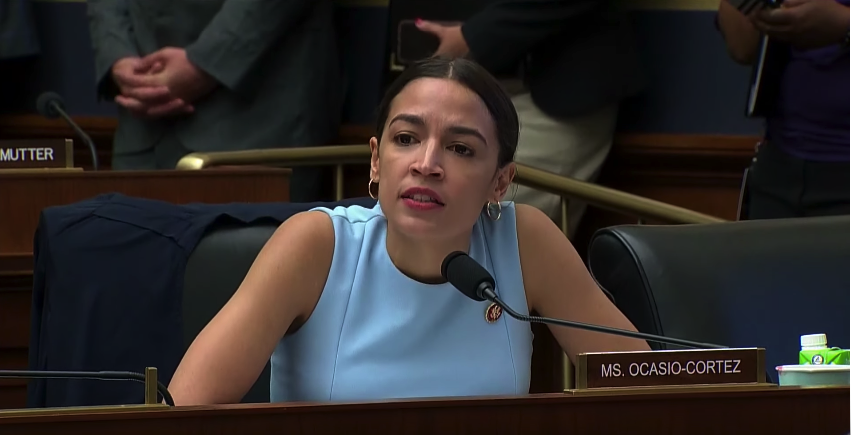 The 29-year-old congresswoman went directly at Facebook for calling Libra a decentralized project. She questioned Marcus over the procedure using which they handpicked 27 founding members for the Libra Association, a so-called nonprofit backing Facebook’s cryptocurrency.

Realizing that Facebook had installed principal founders using a $10 million investment as one of the criteria, AOC said that the social media giant backed crypto would become “a currency controlled by an undemocratically-selected coalition of largely massive corporations.” Marcus responded by saying that Facebook’s digital asset does not want to replace sovereign currencies, and their broader purpose is to work with regulators and address all their concerns in due time.

"We are discussing a currency controlled by an undemocratically-selected coalition of largely massive corporations." https://t.co/D5DNvyW7IF pic.twitter.com/cFrfIJce54

Another congresswoman that appeared unimpressed was North Carolina Representative Alma Adams. The veteran politician questioned Marcus whether he would allow everyday consumers to run a node on the Libra blockchain, a practice that is common in decentralized blockchains where individuals could set up their own mining rigs to run the network.

“No, congresswoman, they cannot,” replied Marcus, explaining that their criteria allowed only big firms and companies with at least background in technology/blockchain or finance to become a member of the Libra Association.

When asked why major companies would make a $10 million investment into Libra, Marcus said their existing partners agreed that the status quo in finance is not working for too many people. They deserve lower costs and easy entry into the digital money infrastructure.

“That is why they have joined Libra,” added Marcus.

AOC’s questions followed Libra’s claim of transitioning into a permissionless network. In retrospective, Libra is a blockchain-based payment network that would rely on not one but a set of nodes to confirm and store transactions on a public ledger. In the technical paper released last month, the Libra Association stated that their blockchain would initially be centralized and the founding members, which include names like Uber, PayPal, and Visa, would act as nodes.

The association promised that, over time, they would decentralize the Libra blockchain to distribute its control among more partners. Nevertheless, how would these new members make into the Libra club is a question that remains unanswered. There are also questions about what incentives investors would have to grow the membership – and to give up the float eventually.

On the legal side, even assuming Libra solves on-chain governance of Reserve composition (a big technical challenge), the Reserve is still going to need someone's name on the bank accounts. (We don't yet have central bank coins.) Presumably that’s the Association. pic.twitter.com/MLBea3jtHm

“I’m not sure how Libra gets to permissionless—at least as I understand that term. I sincerely hope they’re able to, though, and am excited to see them try,” Brito tweeted.

Do you think Facebook’s “cryptocurrency” will falter under regulatory pressure? Share your thoughts in the comments below!