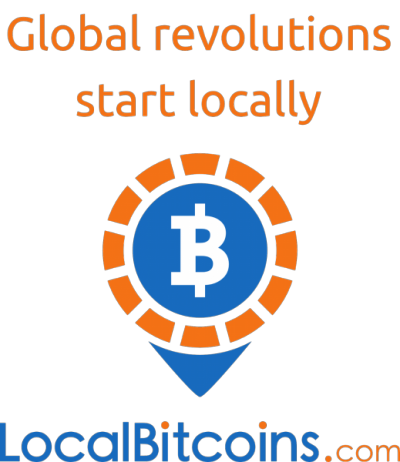 LocalBitcoins now lets you operate your own bitcoin ATM

The cryptocurrency ecosystem is constantly developing new and improved accessibility options for digital currencies; Exchanges are trying to go even further while presenting more direct service options. Localbitcoins finds that the demand for effortless and easy exchanging services is becoming increasingly necessary in order to serve a rising number of people and businesses starting to use Bitcoin. People are more interested in Bitcoin, and more shops accept Bitcoin everyday, both offline and online. The usability of Bitcoin is increasing, so more people want to hop the Bitcoin train everyday. Also remittance use is increasing – on LocalBitcoins we have seen volumes in developing countries increasing, along the more developed countries.

To complement the lack of more direct contact with its customers, LocalBitcoins has lanched an affordable and robust machine for automation of your Bitcoin exchange business. The LocalBitcoins ATM is unique because it presents a new technology that makes it possible for the ATM to work without internet connection, while the exchanging happens on the LocalBitcoins website. The ATM works as a simple and safe cash-box, much like a cash ATM. This makes the ATM very robust. The ATM has 30-note recycler, which also increases maintainability and makes the process robust. The customers who withdraw can get the same notes that other customers deposit.
This makes the operators work easier. The operators has to take care that he has enough Bitcoins to sell, empty the cash box when full, and take care that there are notes in the ATM for customers to withdraw.

Local Bitcoin says the ATM is upgradeable, and that it has a team assigned to be constantly working on improving the features of the ATM. Buying and selling rates can be easily changed via admin interface, as well as otherwise the ATM can be easily monitored via web interface. Also historical rates per ATM are viewable via charts.localbitcoins.com, making it possible to retrieve statistical data.
Now LocalBitcoins are looking for businesses interested in setting up their ATM at their stores or even to try different scenarios.

In the LocalBitcoins web Blog the company says it has been testing two ATM’s in Helsinki for about four months and they have been functioning well. Development has been going on simultaneously and the company has pretty much dealt with all the minor issues they’ve encountered during the test period. LocalBitcoins believes it has simple, fast and reliable product that end users will surely like. Besides this LocalBitcoins are also betting in providing new services that let customers buy stuff from sites that doesn’t accept bitcoin yet. One of these products is gift cards. 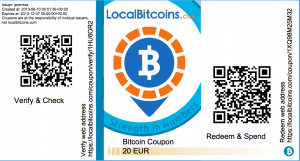 The ATM has been handling more than 300 BTC volume with premiums between about 5-8%, and being able to ROI in just a couple of months. This is very good, because Helsinki is a small city and there are also competing ATM’s in the city.

As LocalBitcoins believes it has a globally leading position in Bitcoin exchanging platforms, they find working directly with customers to be a compensating solution.
The company states that it will be prominently displaying customers ATM’s on the LocalBitcoins.
The price is only 1500 euro around $1150 (+ VAT for EU customers). The machine works both ways; it can take and hold 300 bank notes, and give out up to 30 bank notes. It supports numerous currencies all around the world. The operators make the profit on the spread. In the first ATM’s, the premium has been around 5-8%.
Customers can also design the look of the ATM making it suited for their specific operation, but also offers help in other technical issues along with supportive marketing materials and needs. There is a fee of 1% per transaction from LocalBitcoins in Bitcoins. The operator can define the buying and selling prices, which are updated automatically operator doesn’t have to worry about Bitcoin price fluctuations.

A rising number of exchanges have been promoting the use of bitcoin ATMs. LocalBitcoin is trying to widespread the digital currency, while facilitating businesses and individual entrepreneurs to set up their own bitcoin ATM.