Bitcoin has been caught in the crosshairs of many politicians around the globe, which can be both a curse and a blessing at the same time. Some politicians will openly embrace Bitcoin – or at least as long as it fits their agenda – while others will call Bitcoin “a financial instrument that should be avoided at any cost.” Whether you are into politics or not, the upcoming presidential elections in the United States could prove to be an interesting moment in history for Bitcoin. 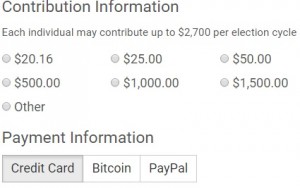 Most of our readers will have heard about Presidential contender Rand Paul accepting campaign donations in the form of Bitcoin a little while ago. While this is not the first time a politician has openly accepted Bitcoin donations, it is a first in terms of Bitcoin being involved in the presidential election of 2016.

What may have surprised most people is that Rand Paul has always been skeptical about Bitcoin and the power it wields. That did not stop Mr. Paul from being fascinated by the concept of digital currency, even though he felt it would be an “improvement” if currencies like Bitcoin were backed by a tangible asset such as stocks.

Bitcoin donations in support of Rand Paul can be sent through his website. All of these digital currency payments will be processed by BitPay, the world’s leading Bitcoin payment processor. While it has not officially been confirmed, you can be fairly certain that every Bitcoin donation will be converted to fiat currency in full.

Late last night, we received word from Blockchain Technologies Corp, as they plan to organize an event during which they will host presidential contender Rand Paul. The venue for this historic event – on Sunday, April 19 – will be the Union League Club, located on 38 East 37th Street in Manhattan, New York. Doors open at 3PM and the event is scheduled until 5PM.

Note from the Author: While this event is open to anyone and everyone, keep in mind there is a dress code to adhere to. The proper attire – business casual or better – is required in order to gain entrance.

It has to be said though that the location for this event is aptly chosen. Manhattan is an area in New York that seems to embrace Bitcoin with open arms, as there are multiple Bitcoin ATM’s to be found there. But there is another reason the location is so important, as it is right in the “backyard” of the same state that is working on the BitLicense regulation for Bitcoin companies. 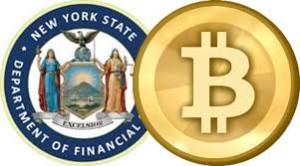 When you put New York and Bitcoin in the same context, most people will often refer to BitLicense. This attempt at regulating Bitcoin activities in the state of New York is a thorn in the eye of many Bitcoin enthusiasts, as they feel the local authorities are trying to discourage people from getting involved in Bitcoin.

BitLicense is a brainchild of the New York Department of Financial Services [also known as NYDFS] and is currently in its second draft. After the first draft had been presented to the public, a period of 90 days was instituted to collect comments from the general public and leaders of the Bitcoin industry. And this second draft was also opened to a commenting period, albeit this one only lasted for 30 days.

While this revised BitLicense draft is slightly more positive compared to the original version, there are still major flaws to be found. Bitcoinist Assistant Editor Evan Faggart posted his thoughts on the revised BitLicense draft, and pointed out these flaws: violations of privacy, arbitrary power given to Superintendent Benjamin Lawsky and restrictive barriers to entry in the virtual currency space.

The Battle of Pro-Bitcoin Politician vs. BitLicense?

It may very well be a sheer coincidence to see an event for pro-Bitcoin politician Rand Paul taking place in the same state notorious for trying to regulate Bitcoin. But it does beg the question of whether or not this is a subtle hint at what the future holds for Bitcoin in New York, or whether Rand Paul hopes to sway a lot of voters’ minds by appearing at an event hosted in that US state that wants to clamp down on Bitcoin and everything it stands for.

What are your thoughts? Let us know in the comments below!