‘High highs, and low lows’ has seemingly been the theme of the week in crypto, and NFTs were no exception. As we kick off the first full week of 2022, there was plenty of action in the NFT landscape to review.

We’re ringing in 2022 in similar style as 2021 – a hefty dose of NFT news from throughout the week. Let’s put it all in a digestible format with this week’s Nutshell.

While some of the biggest cryptocurrency tokens have had a rough start to their 2022, OpenSea’s volume hasn’t slowed down one bit. In fact, according to Dune Analytics, daily volumes (in ETH) every day on OpenSea this year have been greater than any day in Q4 2021. NFTs are flat-out booming on OpenSea to start this year.

The volume is coming despite increased chatter around the concern of centralization within major tools like OpenSea and MetaMask. Check out a full report from our team recently regarding the hefty volume.

Our team provided a thorough deep dive on the latest Bored Ape Yacht Club controversy, stemming around the roots of the BAYC inspiration and associations with the creator’s (Yuga Labs) name.

From CES: Samsung To Add NFT Support On 2022 TVs

CES has been historically seen as one of the biggest traditional tech conferences each year, host to big news, fresh announcements, and wild concept displays.

This year, back in person for the first time in a couple years, the NFT star of the show was Samsung, who announced NFT integration on 2022 smart TVs.

GameStop NFTs Are On The Way

While RadioShack has been rebranding as a new DeFi tool, and meme stock AMC has already found plenty of headlines in crypto, another legacy technology and entertainment brand (and arguably the genesis of all meme stocks), GameStop, is entering the NFT space. According to reports this week, GameStop has assembled a team of 20+ to introduce their NFT marketplace later this year. Check out the latest updates from GameStop’s endeavors from our colleagues at sister network NewsBTC. 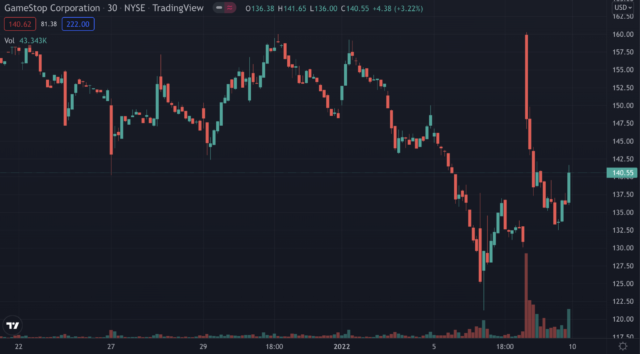 Hip-hop and electronic music have really been the leading genres when it comes to NFTs for the most part. We’ve seen Eminem (who recently purchased his own Bored Ape) and Jay-Z (a CryptoPunk owner himself) get into crypto in the last year, and now legendary hip-hop artist Nas is the latest artist to enter the space. Nas will partner with 3LAU’s Royal platform to offer royalties for two tracks via two available NFTs and three levels of royalty offerings. Nas will be the first to sell royalty rights on the platform.

BTS is one of the biggest names in k-pop, and is starting 2022 with a new NFT announcement that has their fanbase… less than excited. With main concerns voiced from fans regarding sustainability, BTS has responded to upset fans stating that the carbon footprint impact from the NFT series will be extremely small – but many aren’t convinced. BTS has said they’ll be moving forward regardless, courtesy of a partnership with financial services firm Dunamu. Dunamu released their first NFTs in November, paired with BTS just last month, and are continuing to make headlines going into the new year.

Balmain And Barbie See The Latest Fashion Integration With NFTs…

Three new fashion-based NFTs are hitting the market this week, courtesy of Balmain’s latest partnership with Barbie. The three NFTs will be sold via auction on MintNFT. Balmain started making a strong NFT push last month, following major fashion brands like Burberry and Gucci (to just name a few) that entered the space last year. And for Barbie manufacturer Mattel, it’s not their first entrance into the space either, as the brand has previously brought to market Hot Wheels NFTs, and has paired up with the likes of Gary Vaynerchuk’s VeeFriends project. In what could be described as a unique partnership, Mattel President and COO Richard Dickson described Balmain as “perfect partner to translate the iconography that is unique to Barbie into a modern iteration of digital art and physical fashion.”

Related Reading | Paypal Wants Its Own Stablecoin – But Are They Crypto-Worthy?