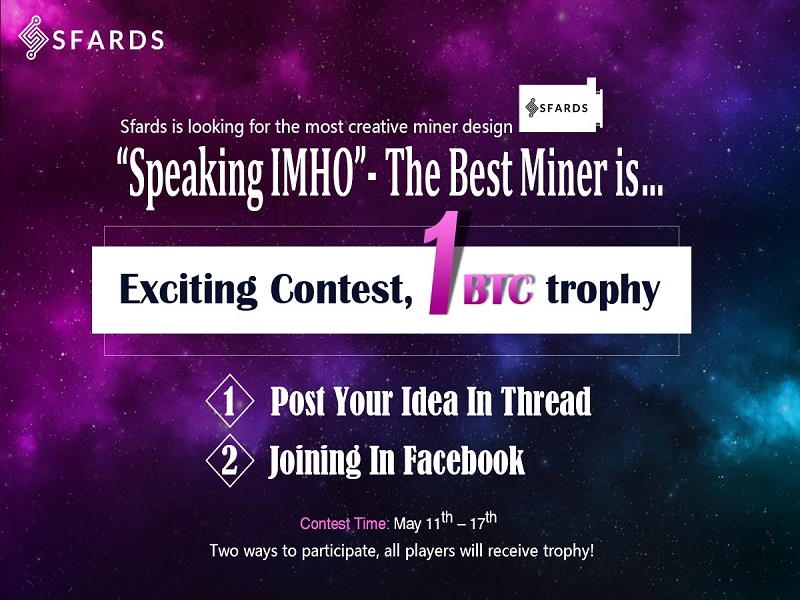 Sfards, a Bitcoin mining company that uses advanced semiconductor technology to develop the future of Bitcoin mining chips, is organizing a contest for the most creative miner designers from May 11 to 17. Prizes include one bitcoin for the winner, as well as consolation prizes for the other participants.

Disclaimer: This article was written with information provided by Sfards. Bitcoinist is not affiliated with Sfards and is not responsible for its products and/or services.

Though the company has been sending sample chips and development boards to developers all over the world, these days Sfards is welcoming the great ideas that can transform miner designing. Sfards believes it’s a great time to hold the SFARDS SF3301 Miner Design Contest, and will award inventors whose ideas become real products with one of the latest SFARDS miners!

Marshall Long is actively working with development boards and chips supplied by Sfards. His company has long been part of the Bitcoin and Cryptocurrency ecosystem as it has held some Bitcoin events. Recently, it held the Hashers United conference in October 14; the event saw a huge number of participants.

Two Ways to Participate in the Contest

Post Your Idea In Thread: Candidates can participate in the contest by replying in the Bitcointalk thread, using text or picture to describe the best design of their ideal miners. Even a one sentence description will be considered for the competition; however, the more details would enhance the chances of the win. One ID can join more than one time, each post shall be more than 20 words, repetitive posts are not valid, and copying from other people’s ideas is not valid. The contest time is from May 11th to 17th and timings are 12:00 pm, Bitcointalk.org time.

Though the winner will get one Bitcoin, there are some other awards for contestants to win:

The organizers will choose the following winners from all participants:

Joining in Facebook: Apart from joining the contest in the comment thread at Bitcointalk.org, people interested in the contest can also participate on Facebook from May 11th to 17th, 12:00 pm, China Standard Time. Contestants need to follow Sfards at its Facebook account. Like on Bitcointalk, contestants should describe the ideal miner designs, directing their posts to “@sfards.” The organizers warn that one Facebook account can only submit one entry, and descriptions should be more than 10 words. Copying others’ ideas is invalid and won’t be considered.

The two kinds of awards available for participants:

The organizers would like for participants to leave their DogeCoin and Litecoin addresses in their replies, as they will transfer the money to these addresses if they win in any of the two categories.

Disclaimer: The author of this article is not in any way associated, nor has any vested interest in, Sfards or Final Hash.