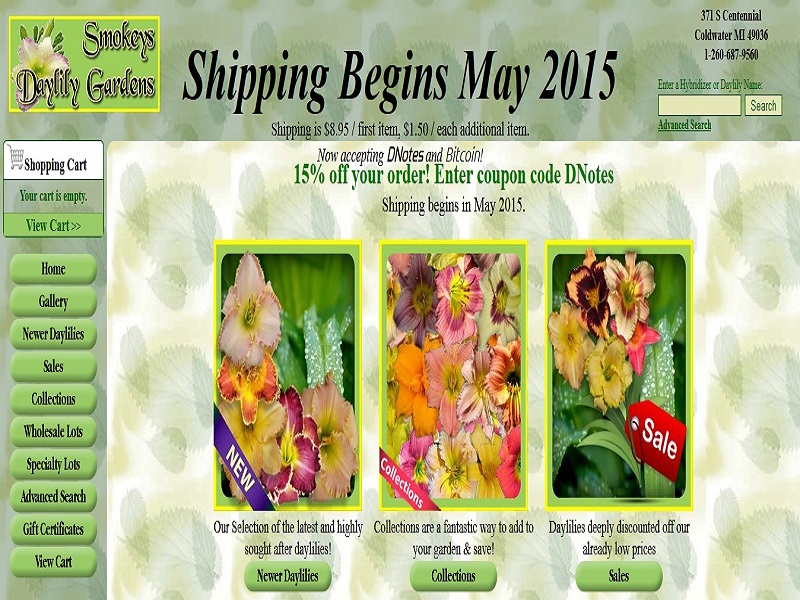 As each day passes, merchants from all around the world are beginning to integrate cryptocurrencies into their business plans. At this moment in time, Smokeys Gardens, which is one of the largest daylily growers in the world, has recently announced that they have integrated DNotes, and that customers can now use this currency in order to purchase products from them.

Disclaimer: This press release was provided by Bitcoin PR Buzz. Bitcoinist is not affiliated with Daylily Gardens and is not responsible for its products and/or services.

You may not be aware of this, but the same team that has created DNotes is also responsible for Smokeys Daylily Gardens, as it helped build a company with a blurred line between a business and a hobby, which quickly transformed it into one of the biggest providers in the world. Daylily also represents the second largest selling perennial plant, with tens of thousands of cultivars from all around the world.

This development is quite important for DNotes mostly due to the fact that Smokeys Gardens represents the first merchant to accept DNotes as a form of payment for daylily purchases, so they now have an important influence in this market. This project is also a test which will further prove the usability of DNotes, which is a stable digital currency that was built from the ground up with integrity and trust, but which also has quite a lot of potential.

What makes DNotes different from other digital currencies of its kind is that from the first day, developers wanted to develop a currency based on trust, which wouldn’t be too volatile, and in which people from all around the world could safely invest. By using Blockchain technology, the currency has some interesting embedded features that are being used in order to prevent inflation, but also help the currency provide an exemplary means of storage. With this in mind, if the currency continues like this and more merchants begin accepting it, then chances are that they may exceed fiat in global payments on the Internet in the future, which is quite an amazing step.

The co-owner of the firm went ahead and pointed out the fact that normally, the taxes are exacerbating. However, with the use of DNotes, they are practically reduced to 0, which is great news both for the customers, but also for the company which can now save more money.

Based on everything that has been outlined so far, we are excited to see how DNotes will score in this niche, if it’ll be used, and if it is really as stable as it seems. What do you personally think about this Bitcoin alternative? Let us know your thoughts.