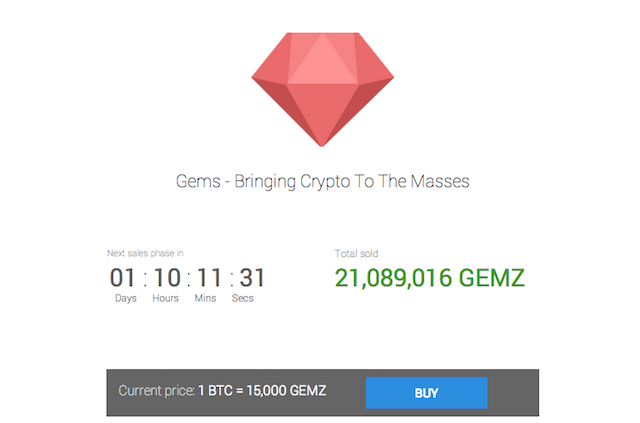 December 8 — Social messaging app Gems is having a token pre-sale on Koinify, and in less than one week has raised $450k worth of bitcoin. A total of 50% of the total GEMZ supply is available for pre-sale, and 42.5% of those have been sold in the first seven days of the crowdsale. GEMZ is a Counterparty issued asset or token, and funds are going to a 2-of-3 Coinbase multisig wallet. The three key holders are Gems Founder Daniel Peled, Counterparty Chief Scientist Adam Krellenstein, and Koinify Corp.

In an earlier interview Gems told Bitconist,
“Gems is a Social Messenger integrated with next generation bitcoin technology. Gems offers a WhatsApp style mobile experience with fully encrypted and private messaging, and a built in wallet. Our new introductory video is now live and gives an simple overview of how Gems works.”

Gems plans to release a social messaging app that boasts encrypted messaging free of charge, a rewards program for bringing your friends to the platform, the ability to chose your level of anonymity, and the ability to earn GEMZ by opting in to sponsored messages. Users can also opt-out of advertisements. Gems can be used anonymously because the service only requires an alias by default. And, people are rewarded for inviting their friends through Airdrop.

“Bringing bitcoin to the masses. This is the most important challenge the crypto-currency community is facing today. We’ve designed GEMS from the ground up with this goal in mind.”
—Founder of Gems Daniel Peled.

A total of 100 million GEMZ were created in the genesis block. 50% are available for pre-sale, 8% goes to the development team, 12% is used for promotional giveaways, and 30% is distributed through Airdrop. Airdrop distributes about 27,500 GEMZ daily to users based on their GEMZ stake and on how many people they bring onto the network. According to Koinify online, the promotional giveaways are reserved for community contributions, third party developers, and bounties. And, the development team funds are distributed amongst developers, marketing and community outreach, and a legal contingency fund.

“…Gems also introduces an innovative reward mechanism which benefits its users. Anyone using the Gems application receives Gems tokens for inviting their friends, utilizing the network, and helping to build the ecosystem. Gems tokens serve as the in-app currency which, for example, are paid directly to the users by advertisers…”
— Gems.

Gems plans to release the iOS version of their app on December 30 and the Android version on June 30, 2015.