Stripe Launches Mobile App, Could Bitcoin be a Better Alternative?

Stripe is an online dashboard that allows business owners to organize and manage their payments. The service offers a variety of features, including “storing cards and processing subscriptions to power marketplaces and everything in between.” Additionally, Stripe allows users to accept international payments, supporting over 100 currencies, including Bitcoin. Now, Stripe is launching an iPhone app, allowing users to manage their payments on the go.

Also read: Stellar and Stripe Speak at the Future of Money and Technology Summit 2014 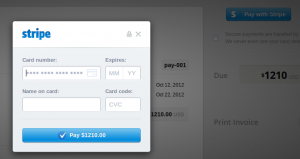 The mobile app will do everything that users can currently do on Stripe’s online dashboard. With the iPhone app, however, users can have notifications sent to their phones when they receive payments or when a customer makes a purchase. The app also allows users to create daily summaries of their business’ activity; there is also a search function, which can be used to look up past financial activity.

Stripe has become a popular payment management platform, making it easy for business owners to manage many different kinds of payments from all over the world. Since its launch, Stripe has become a $3.5 billion USD business; the company has raised over $200 million in funding, bringing in $70 million just in December of 2014.

Stripe definitely simplifies the process of managing payments. With its new mobile app, the company can even reach areas where businesses are dependent on cell phones, like developing countries with low banking penetration.

However, there is one technology that provides the same services as Stripe in a much simpler fashion: Bitcoin. Stripe helps people operate within the legacy financial system, but Bitcoin offers a way to make the whole thing simpler and more efficient. With Bitcoin, users don’t need an application to help them convert between 100 different currencies — Bitcoin has no borders and can be sent to any country without being converted into another currency. Furthermore, Bitcoin has a far larger potential to help developing economies. Stripe lets its users manage bank-to-bank payments, but what about business owners in poor countries that don’t have bank accounts? Bitcoin can be used on a mobile device just like Stripe, and it doesn’t require a bank account to send and receive payments.

Stripe may be providing the next step towards a digital economy — it even has options for Bitcoin payments — but it likely isn’t the endgame when it comes to digital payments.

Which is the best option for international payments, Stripe or Bitcoin? Let us know in the comments below!