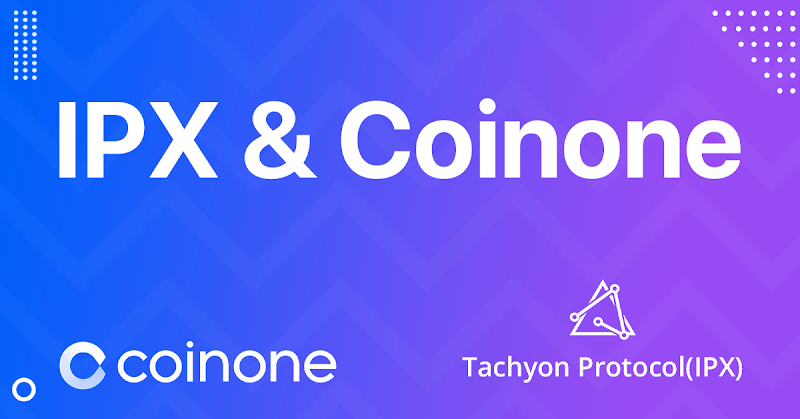 Tachyon(IPX) Got Listed on Coinone

Tachyon Protocol’s native token IPX has been listed on South Korean cryptocurrency exchange Coinone today. Users of Coinone can now trade IPX/KRW pairs. This listing comes on the back of the tremendous trading volume that the IPX/KRW trading pairs have generated in fellow South Korean exchange Bithumb.

Coinone was conceptualized with a vision to bring Bitcoin and other major cryptocurrencies to the South Korean crypto community. In 2015, Coinone became the first Asian exchange to implement multi-signature wallet technology, in association with BitGo. Funds stored on a multi-sig address can only be moved if multiple signatures (generated through different private keys) are provided, which creates an additional layer of security. Apart from their trading platform, Coinone also offers a wallet app and a payment gateway service.

South Korea has been at the forefront of the blockchain revolution over the past few years and is one of the few countries with wide-scale adoption of the technology. In a 2017 survey, it was found that over 30% of the salaried population had invested in cryptocurrencies.

Earlier this year (March 2020), the National Assembly formulated laws to provide a framework for the regulation and legalization of cryptocurrencies and crypto exchanges. The passage of the cryptocurrency legislation is a victory for the South Korean blockchain entrepreneurship space.

With first Bithumb and now Coinone, Tachyon has partnered with two of the largest South Korean exchanges. Tachyon’s strategy seems quite clear – tie-up with major exchanges in the South Korean cryptocurrency space, to demonstrate their prowess, expand influence, and attract local investors.

While many other blockchain-based projects take years to develop a functional prototype, Tachyon already has a working product in the form of its distributed VPN mobile app, whose Android and iOS versions were launched in the first quarter of 2020. This provides Tachyon with a unique advantage when it comes to capturing the Korean market. It wouldn’t be wrong to claim that as far as South Korea is concerned, IPX is the dark horse in 2020.

On the development front, Tachyon has launched the 1.0 version of the Tachyon wallet as part of IPX Staking System 2.0. With IPX Wallet, users can manage IPX assets via Tachyon VPN. Tachyon has also announced the upcoming release of Node Manager 2.0, which will allow Node Providers to join staking and manage nodes by themselves easily.

IPX token enables VPN users to access decentralized servers and enjoy private surfing, with all online activities being highly encrypted and secured. The clear focus and execution of the roadmap milestones demonstrate Tachyon’s confidence in their vision to build the Tachyon global bandwidth market. Going by the strong performance shown both by Tachyon’s team in the design room and IPX token in the crypto market, it’s a matter of time before Tachyon attracts more top partners like Bithumb and Coinone.