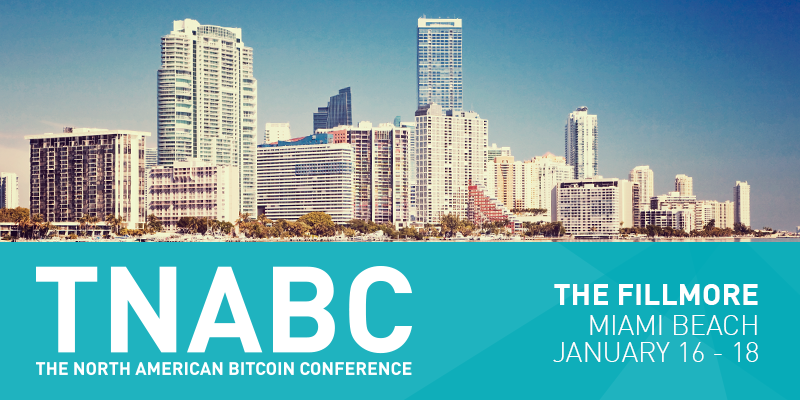 Miami Beach – November 28, 2014 – More than 1500 bitcoin community members will soon be converging on Miami for a direction-setting conference aimed at driving the currency from speculation to mainstream. Building on the recent success of The North American Bitcoin Conference (TNABC)  in 2013 and 2014, TNABC Miami will hit Miami Beach on January 16 – 18, 2015 at the historic Fillmore Theatre in Miami Beach.

In 2 short years, TNABC has grown from 100 attendees in 2012, to over 2000 visitors from 40 countries in 2014. This is due to our attendees unwavering enthusiasm amplified with the best speakers in the world. Speakers include an impressive list of the founders behind groundbreaking and industry-leading bitcoin companies including Vinny Lingham, Roger Ver, Charlie Schrem, Tony Gallippi, Roger Ver, Matt Roszak, Dan Moorehead and Nicolas Cary amongst many other CEOs and founders of the world’s leading technology companies.

More than ever before, TNABC comes at a crucial time. In the last six months the currency has experienced both the good and bad sides of the limelight: whilst it has dramatically increased in visibility and gained a rising acceptance with vendors and shoppers, there has been more regulatory scrutiny and wild fluctuations in value. It’s at this time, more than ever before, that the Bitcoin community is needed to ensure a prosperous and well-balanced future for the currency and technology.

Organised by Moe Levin he comments “TNABC has been created to draw this community together. It is a unique opportunity to meet and hear from the biggest names in the industry and powerful newcomers, make new friends, grow your network and seek out synergies and make your voice heard.”

This year for Bitcoin Black Friday, which is quickly becoming a holiday tradition in the bitcoin community, TNABC is offering 2 for 1 tickets from Black Friday until Cyber Monday.

Moe Levin adds “Our community made us, so our philosophy remains simple: we put our community first. We will provide more networking and education opportunities for attendees that are unavailable anywhere else and keep the conference affordable for everyone. That includes welcoming Bitcoin Black Friday in a big way.”

The North American Bitcoin Conference returns to Miami follows successful Bitcoin conferences in Amsterdam, Miami Beach, and Chicago, which featured thousands of attendees from over 40 countries.

The most respected Bitcoin conference in North America, the NABC has been featured in CNN Money, Forbes, Yahoo! Finance, the Chicago Tribune, International Business Times, the Miami Herald and The Wall Street Journal.

For tickets and the most up-to-date news visit: btcmiami.com  #btcmiami