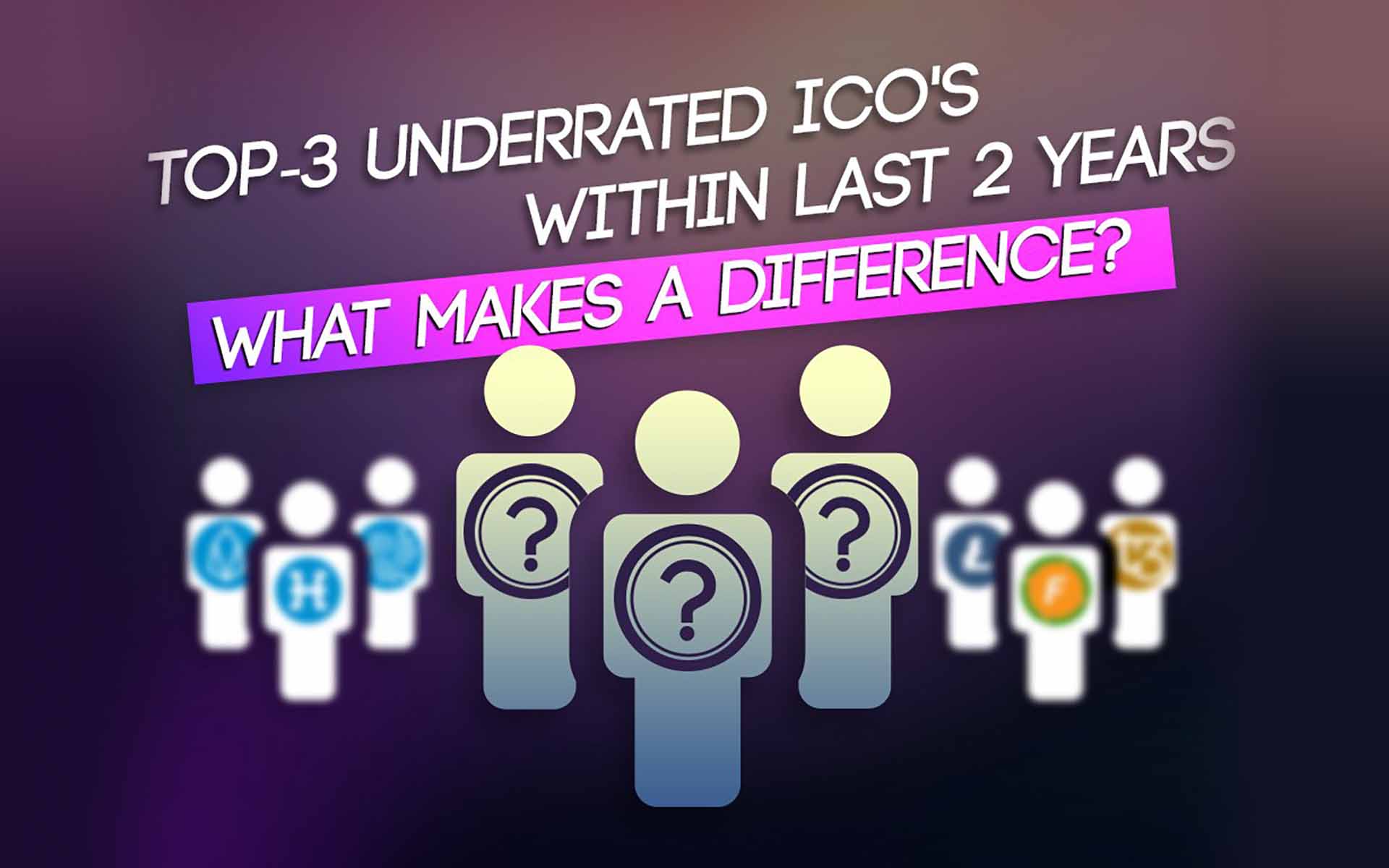 TOP-3 Underrated ICOs Within Last 2 Years: What Makes a Difference?

Once a blockchain startup takes off, it follows the goal to raise money for further development. Luckily, since 2017 there is a tool for crowdinvesting in new crypto businesses named ICO (Initial Coin Offering).

What goes on during an ICO is the following: a startup, looking for funding, issues digital tokens. Tokens are available for purchase during the ICO by every person in the market. Once you buy the token, you are the only owner of it and can sell, keep or withdraw it as you like. No governmental regulations may restrict the process.

In January — March 2018, there was raised about $6.3 bln via different ICOs. This amount already exceeds last year. It means the interest in ICOs is growing, and every young business is looking forward to it.

Let’s see what ICO is like for some start-ups.

Spectrecoin is one of 5 the most successful ICO start-ups in blockchain area nowadays. The idea of Spectrecoin is anonymous transactions among token’s exchange via Proof-of-Stake v3 consensus. The core of the business is an HD wallet based on ShadowCash protocol, what consumes a low amount of electricity and leaves no trace in the network. Today Spectrecoin’s market capitalization of it is more than $8 mln.

But who would believe if you say that a success to Spectrecoin came after an epic fail?

When CEO and Spectrecoin team inspirer — Mandica — became seriously ill, the ICO started fading out. Investors stopped believing in the idea proposed by the team. As a result, a bad reputation about Spectrecoin as a non-perspective startup spread out around the globe. Most of the supporters who already bought the tokens were upset and consider this as a sunk cost. Overall, only $20K has been raised during the ICO. Public ICO was closed on January 6th, 2017.

It seemed that was it.

But things changed when Spectrecoin started to overcome the crisis in August 2017. A new development team has brought the second wave of Spectrecoin evolution. So far, the project is ongoing, and a new price of XSPEC coin is to be around $100-150 per coin. Keep in mind an initial coin offer of $0.001 brings the investors about 103628% profit.

CEO and Founder of Nexxus Partners – Bob Wood – comments that diversity, utility requirements, scalability, infrastructure support, entrepreneurial capital, seller acceptance, and market solutions are the key factors in the checklist when making the decision whether or not to invest in an ICO.

A strong team lead by Roger Haenni — an experienced professional in big data startups launch, presented a new project named ‘Datum’. The idea behind Datum is to process and structure users’ data and sell it to any stakeholders under certain terms. Data is being collected from social networks, wireless peripheral devices or other sources of user behavior.

Once in October 2016 Datum team decided to try an ICO, project risks were determined as 3.7 out of 5.0, and the ICO campaign was interpreted as a high-risk one. Investors requested a big team of consultants for the project in order to keep it on track. Also, there were some comments regarding the huge spread in industries covered by Datum developers: there might be better to focus on 1-2 niches to satisfy.

Anyway, the Datum ICO was rated 2.5 out of 10 in a general scoring as high-risk to invest in. As a result, instead of millions of dollars money raised, the team received about $30K, what is definitely undertaken.

Reasons to consider the potential of Datum:

1) Data ownership concept is not a new one. The concept stands for not only data collection by security offices but also people’s desire to keep the data hidden.

2) The largest data volume nowadays is in medicine industry. Plenty of people use cases which need to be controlled and regulated by the owner.

3) After buying the coins, Datum token owners become a part of a large network scale.

There should be some distractive option to stop giants like Google or Facebook to share and sell user data. What if after Datum there will be none? But that’s another story.

Datum is a company that plans on changing this by allowing users of its app to extract and backup their user data from various other apps and services and then share or even sell this data. Most importantly, the sharing is done anonymously by default, which will appease many people who worry about their personal information falling into the wrong hands.

Datum’s ICO looks fine now. But wasn’t the start-up another candidate to be kicked out of the business?

Let’s have a look who else might face the same difficulties during ICO at the moment.

Can you imagine a new blockchain, different from Satoshi Nakamoto’s one? Can you imagine transactions in cryptocurrency without any fee? What if we say you are now able to launch a company right in the network via a business platform?

Let’s have a look what a disruptive technology allows that.

In 2016 in the city of Russia — Ekaterinburg, a group of students got the idea to adopt a revolutionary technology. They named it Hive.

Within 2 years an idea has grown in an IT-company Paymon with a core business for cryptocurrency holders and blockchain technology users. The team has expanded up to 20 members with a big pool of Big-3 advisors and supportive investors from Russia and abroad. The whole community of Paymon is developing rapidly along with presenting a new technology to the market.

The point of new blockchain technology — Hive — is to offer more opportunities for using cryptocurrency, except just investing, trading, and saving assets. The Paymon team develops a crosschain with smart-contracts, where users can exchange the coins quickly and without any fees.

Hive is currently disrupting existing solutions in the crypto world. Because so far there are no such services that give you a chance to make transactions for free while using a multifunctional solution. As a result, there are a lot of misunderstandings of the concepts overall.

Why don’t you consider the following before you stop believing in Paymon?

Summing up, Paymon is for sure an ambitious project, challenging existing solutions in the world of cryptocurrency. But who believes in it? Wouldn’t a new technology become another underrated startup?

Paymon is now at the ICO stage, distributing its PMNT tokens. From the examples above, there are a bunch of sad stories about ICO difficulty to build a trust from the world. That probably reflects the mentality of crowdinvesting overall, when people feel skeptical and cynical towards disruptive solutions.

Hopefully, Paymon might expect a different attitude and warmer welcoming at the ICO stage, since it has already overcome an era of early birds and has managed to build a strong Hive community in the market so far. Paymon consists of ambitious founders, consultants, developers, and analysts. Today it’s a promising business if some misconception won’t call it ‘scam’.

What will Paymon’s future be like after ICO? Endorsement and people’s trust — make a difference.

On the one hand, ICO market is growing rapidly during last year. From January 2018 till March 2018 there was more than $6.3bln funded over ICO stages, which is already much more than during 2017.

On the other hand, there is a number of ICO frauds growing on the market as well. For instance, from the beginning of 2018 $9 mln is being lost on a daily basis. In April, 2018, there was a huge scandal in Vietnam regarding fresh ICO, which wasn’t an ICO at all, but a scam. Investors have lost about $600 mln of their money. Among all of those dirty ICOs it’s hard to see a worthy one, but you’d better.

Summing up, it’s really important to launch not only the great business, but to care about professional ICO campaign as well in order to build a trust within community and a reputation of a successful innovative business.