Twitter CEO Jack Dorsey has installed and publicly praised a consumer-grade tool for receiving tips via Bitcoin and the Lightning Network (LN).

In tweets February 20, Dorsey, who has come out highly bullish on both Bitcoin and more recently LN, continued his advocacy of the technology by championing Tippin.me.

The tool, which launched in January, first gained fame as the platform used for the Lightning Torch transaction relay which first grabbed Dorsey’s attention earlier this month.

“I hooked this up and already got tipped some satoshis,” he wrote, showing his balance as a princely 49 cents worth of satoshis.

In the meantime, the Lightning network tip worked instantly when we sent him 500 sats (about 2 cents): 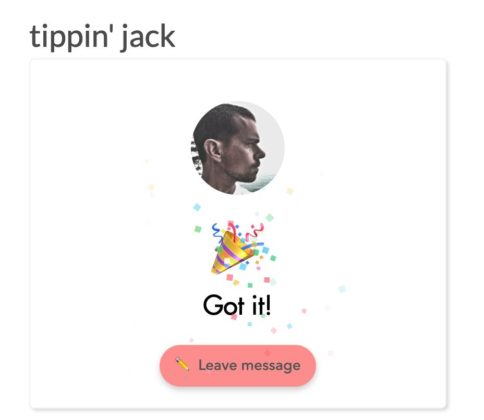 The idea had come about following Dorsey’s participation in the relay, the CEO hinting in a later podcast with Lightning Labs CEO Elizabeth Stark that the technology would in fact be coming to his other venture Square in the future.

“We would love to make [Bitcoin] as fast and efficient and transactional as possible, and that includes looking at our seller base and register,” he said at the time.

As Bitcoinist reported, the latest spotlight for Lightning comes as more and more easy-to-use products and services begin to emerge for lay consumers.

In addition to ordering pizza in the US via Lightning Pizza, Tippin.me is now available for Twitter users as a new Google Chrome and Firefox browser extension.

“Not only the Twitter experience completely changes but it also open limitless future scenarios,” developers promised.

What do you think about Jack Dorsey using Tippin? Let us know in the comments below!