UK newspaper The Guardian has published outright warnings not to invest in Bitcoin or gold, describing them as a “waste of human investment energy.”

In an extensive post arguing that trust principles of fiat currency are superior to decentralized setups in many cryptocurrencies, the blogger known as ‘Mr. Money Moustache’ tells readers purchasing them is “collective insanity.”

People who think that there’s even a tiny chance bitcoin could become a world currency say it is severely undervalued. […] You could make the same argument about my fingernail clippings: they may have no intrinsic value, but they’re in limited supply so let’s use them as the new world currency.

The Guardian has carried anti-Bitcoin articles with increasing regularity as prices continue to climb, joining sources such as CNBC and UK tabloids in calling the imminent death of cryptocurrency.

The perspective is increasingly rare; South Korea is in the midst of a U-turn on its proposed crypto trading ban after it was described as “ridiculing” the population, while in the US, JP Morgan CEO Jamie Dimon publicly admitted regretting calling Bitcoin a “fraud” last year. 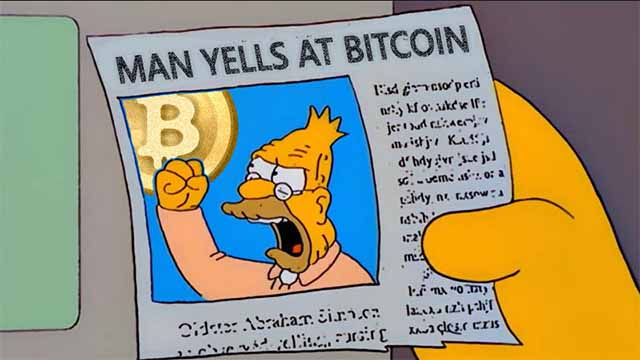 Readers Told: ‘Go All In And Trust People’ With Fiat

For Mr. Money Moustache, however, it is not just Bitcoin, but precious metals which pale in comparison to the sturdiness of fiat currency investment.

It’s all the same stuff that people say about gold – another waste of human investment energy. […] Government-issued currencies have value because they represent human trust and cooperation. There is no wealth and no trade without these two things, so you might as well go all in and trust people.

Bitcoin’s supply is now 80% mined, while data reported by Bitcoinist last week reveals over $375 billion in BTC changed hands in 2017 – the equivalent of around $12,000 per second.

Prices at press time averaged around $14,300 per coin, representing a 5% climb over the past 24 hours.

What do you think about The Guardian’s angle on Bitcoin and gold? Let us know in the comments below!

Images courtesy of AdobeStock, The Simpsons