This past week was an exciting one, with the rising bitcoin price, community drama, and shaky financial markets giving us a lot of things to watch. China started the week with a massive stock market crash, putting the global economy on high alert. Meanwhile, in the Bitcoin community, we discovered that the Cryptsy team moved out of their building in Delray Beach, Florida without warning — no one knows where they are. 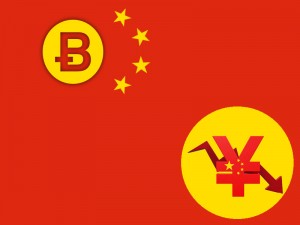 The week started off on Monday, January 4, 2015, with the Bitcoin price following the $430s pattern established in the previous week. Nothing dramatic happened on the markets, but we did see gradual growth throughout the day. The price heat a high of $435.86 at 3 PM, after which activity leveled out and the price did not move much more for the rest of the day.

In the news, China got a rough start to the first trading day of the year, experiencing a massive stock market crash. This crash led to several trading halts during the week, with the trading day on January 7 only lasting 29 minutes. Remarkably, while global markets reacted negatively to the Chinese decline, Bitcoin markets remained serene. The bitcoin price hardly fluctuated between the 4th and the 5; in fact, the price actually saw some growth. This is uncharacteristic of bitcoin, considering that financial news from China often has significant influence on the price.

Tuesday, January 5 opened at $434.65, a slight gain over the start of the previous day. The early morning hours saw a dip in the bitcoin price, possibly due to the perilous financial situation currently facing China. However, the dip proved to be rather shallow, and the price leveled out in the low $430s around midday. The price stayed very flat well into the evening, and then fell again right at the end of the day, sliding into the high $420s.

On Tuesday, we reported on a recent announcement coming from Grantcoin. Around Christmas, Grantcoin received notification that the IRS had approved its request for non-profit status, making it the first cryptocurrency charity to be designated as a 501(c)(3) charity. To commemorate what Grantcoin believes is a historic moment in cryptocurrency, the organization announced its plans to launch two new charity programs.

January 6 kicked off at $428.55, with early activity suggesting that the markets were in for a boring day. For the most part, that early activity indeed characterized the day’s trading, as the price stayed remarkably flat well into the evening. However, at 9 PM, the price suddenly jumped upwards, rising from $430 at the top of the hour to $442 by the close. The day ended in the $440s giving the markets hope for an exciting Thursday.

Meanwhile, in the news, we reported on a very successful funding round conducted by Zebpay. The company raised $1 million USD, which Zebpay says will be used to promote its bitcoin wallet in India.

Gem also announced a successful Series A funding round on Wednesday, reportedly raising $7.1 million USD. This funding round was led by Pelion Venture Partners, whose partner Ben Dahl the Gem team.

Thursday, January 7 began with the bitcoin price at $440.11, still clinging to the gains brought by the last minute rally on Wednesday the 6th. The price rose throughout the entirety of the day, although not nearly as rapidly as what we saw during the previous night. We hit $450 during the early morning. By noon, the bitcoin price climbed to $453.66. The price continued climbing in the latter half of the day, hitting $460 before the close.

In the news, we reported on Stanford University’s new Bitcoin engineering course. In this course, led by 21inc’s Balaji S. Srinivasan, will teach students the basics of building Bitcoin-enabled applications. This course will be graded on participation, and there is no final exam, but students will need basic programming skills in Python, HTML, CSS, and JavaScript in order to be successful in the class.

January 8 opened at $455.70, a more than $15 increase over the start of the previous day. The bull run died out on Friday, though, and the price dropped into the $440s at midday. We did see some recovery in the afternoon — the bitcoin price returned to the $450s, but we did not see $460 again for the rest of the week.

Saturday started with the bitcoin price at $449.37. The 9th saw a lot of fluctuations in the price, floating in and out of the $440s and $450s, but ultimately settled down into the mid-$440s towards the end of the day.

On the 9th, Bitcoinist broke exclusive news regarding the Cryptsy cryptocurrency exchange that may be related to the difficulties customers have been experiencing when trying to make withdrawals from their exchange wallets. An anonymous source visited Cryptsy’s headquarters in Delray Beach, Florida, hoping to speak with Cryptsy CEO Paul Vernon. Upon arrival, our source found that the building was empty, and the Cryptsy team was nowhere to be found.

Sunday, January 10 kicked off at $446.01, the markets still trying to hold on to some of the gains received in the mid-week rally. After a brief decline into the low $440s during the morning hours, the markets picked up and the bitcoin price rose for most of the day. For a few hours towards the end of the day, we saw $450; however, the price fell back into the $440s late-night to end the week. Sunday ended at $448.90, making for a 4.10% gain.

What do you think will happen in the Bitcoin world the coming week? Let us know in the comments below!